For those who have been incarcerated, employment after release can reduce the likelihood of further criminal activity and a potential return to prison. In new research, Chantal Fahmy and Matthew Gricius examine the impact of prison visits by family members on the likelihood of employment after release. Using survey data, they find that those who were visited by family and had served fewer than three prior prison terms were more likely to secure a job after their release.

Picture this: you’ve just been released from prison for the first time after serving four years behind bars. You lost your job when you entered prison and now your former employer won’t rehire you because you’re a convicted felon. What do you do? Your only real option is to rely on family and friends while you try to get your life back on track. Turns out, your friends and family may also be the best chance you have of getting a job. But this support can fade away if you are constantly being sent back to prison.

We’ve known for quite some time that social capital and social network connections are critical for employment, especially for people with a felony record. But the very nature of incarceration stunts the maintenance and growth of exactly the type of personal networks which are needed to get a job: ties to friends and family members with legal employment. And, when someone spends prolonged periods in prison or they cycle in and out of prison (as many do), those social ties are weakened or may vanish altogether. Of course, a history of offending and prison time could signal to an employer that this person can’t be trusted. In this way, an endorsement by a family member who can persuade an employer that their loved one can be trusted goes a long way.

This is complicated by the erosion of family trust and the withdrawal of assistance by family members. Having an incarcerated loved one is incredibly difficult for families, both emotionally and financially. Consequently, family support and trust are easily lost when frequent and regular contact doesn’t occur. One way to maintain that trust is through prison visitation.

During visits, incarcerated people can confer with their loved ones about future job prospects, build stronger family support, and repair negative dynamics and family relationships. Working on these relations during incarceration makes it more likely they will find stable employment after release. Despite the benefits of visitation for families and incarcerated people, visits are extremely rare: most people never receive an in-person family visitor. But even one prison visit increases chances of post-release employment and decreases risks related to reoffending.

After leaving prison, getting a job protects people from taking part in continued criminal activity. For formerly incarcerated people, being able to gain steady work functions as a key element of post-prison success, even though it’s considered one of the biggest challenges during reentry. By the same token, people who are employed in occupations that not only provide economic stability but are personally satisfying are more likely to stop committing crime.

The reentry period is challenging given that formerly incarcerated people often face many barriers as they make this transition, including securing stable housing, returning to their former neighborhood which may be high in crime, combating physical and mental health issues, mending family relationships, and establishing general financial well-being. In addition, people reentering society after serving time in prison have a difficult time securing stable work. Almost half are still unemployed several months after returning to their home communities. And, more often than not, getting a job is a standard condition of parole. When formerly incarcerated people are able to get a job, it is usually in the secondary labor market, characterized by low pay, poor working conditions, high employee turnover, and part-time work. 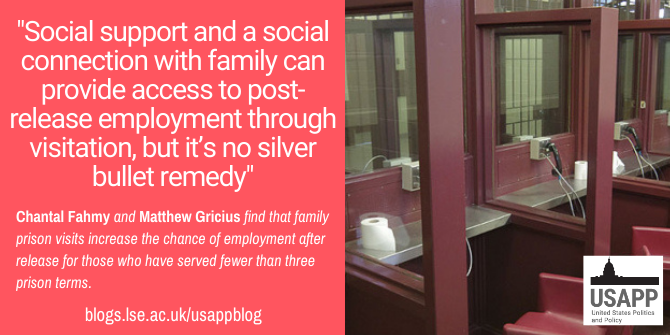 The number of prior incarcerations is important

We put these ideas to the test using the Serious and Violent Offender Reentry Initiative (SVORI) dataset to explore whether visitation from family can increase the chances of post-release employment. These data are made of survey responses from individuals who were convicted of serious or violent offenses and who were about to be released from prison and surveyed again three months after they’re released. We examined how engaging in prison visitation during incarceration may act as a conduit for social capital post-release, which could conceivably open the door to a much-needed connection for employment, and hopefully, successful reintegration.

Surprisingly, visitation alone did not have a direct effect on the likelihood of post-release employment. Instead, as Figure 1 shows, we found that people who were visited by family and served fewer than three prior prison stints did secure a job by the third month out of prison. In essence, what this means is that family members are likely more skeptical of vouching for their loved ones after they have served multiple terms. People who only have a couple prior incarcerations may have better or higher quality relationships with family members by virtue of the fact that they have spent less time separated from them and were probably in more consistent contact during their time behind bars. Perhaps family members are now more skeptical of vouching for their loved one and may withdraw their resources out of fear of personal consequences. 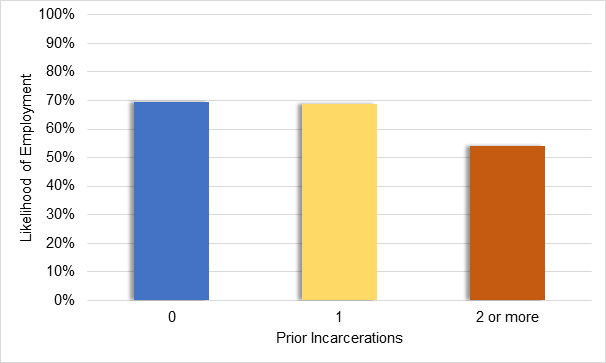 The implications of our findings are that social support and a social connection with family can provide access to post-release employment through visitation, but it’s no silver bullet remedy. Face-to-face prison visits assist in the preservation of support while an individual is incarcerated, but if the person continues committing crime, these family bonds are fractured or severely damaged. The results also suggest the importance of exploring how visitation may impact other post-release outcomes that are also critical in the reentry process, such as housing and healthcare. However, in-person visitation requires a lot of resources from families, who are usually not in an economical position to visit often. This is because prisons are generally located outside of major metropolitan areas, so travel costs may be prohibitive, and family members might be burdened financially by trying to support their loved one while also assuming many of their legal debts.

Recently, and especially during the COVID-19 pandemic, correctional officials have begun implementing and facilitating virtual visitation, for example via Zoom calls between prisoners and their families, but it remains to be seen if this can provide the same benefits as face-to-face interactions during incarceration. Prisons and correctional systems should look to novel ways of keeping family ties strong and robust during incarceration. After all, strong family bonds increase the chances of successful reintegration, perhaps ultimately lowering the likelihood of reincarceration.