After nearly two decades of boots on the ground, last month American forces left Afghanistan, with the Taliban retaking the country much more quickly than had been anticipated by the administration of President Biden. In this Q&A, LSE Phelan US Centre Director Professor Peter Trubowitz looks at the withdrawal from Afghanistan in the context of a US strategic adjustment which will see a greater focus on Asia, China, and on tackling domestic problems to repair America’s broken social contract.

What comes after Afghanistan for US foreign policy? Is this the end of the American Century?

This is the sixty-four-thousand-dollar question. In my view, America’s withdrawal from Afghanistan is best seen as part of a long, messy and wrenching process of strategic adjustment the country has been experiencing for over ten years. Internationally, the principal challenge to American interests has shifted to East Asia. That challenge is as much economic and technological as it is strategic and military. The core strategic argument for getting out of Afghanistan was so that the US could focus more of its time, energy, and resources on China and the Asian theater. Domestically, the central challenge facing the US is to renew the social contract which has been badly damaged by the country’s failure to keep international openness and social protection in balance. Restoring that balance is a key political argument for Biden’s multi-trillion-dollar domestic agenda. If Biden is able to bring international ends and domestic means back into balance (a big if), then the withdrawal from Afghanistan may be remembered not as the end of the American Century, but rather as the beginning of new chapter in American internationalism.

What are the domestic political implications for the Biden administration?

In the short term, this will almost certainly continue to hurt Biden’s standing domestically. Biden ran for the presidency on his experience, competency, and compassion. The botched withdrawal, the terrorist attack at the Kabul airport, and the unfolding crisis on the ground in Afghanistan for so many who put their faith in the US-guaranteed status quo, have hurt Biden in the court of public opinion. However, as the political scientist V. O. Key, Jr. famously argued 60 years ago that the only public opinion that truly matters in politics is future public opinion — that is, the opinion presidents seek to create through their actions, or worry that their opponents’ attacks might produce. 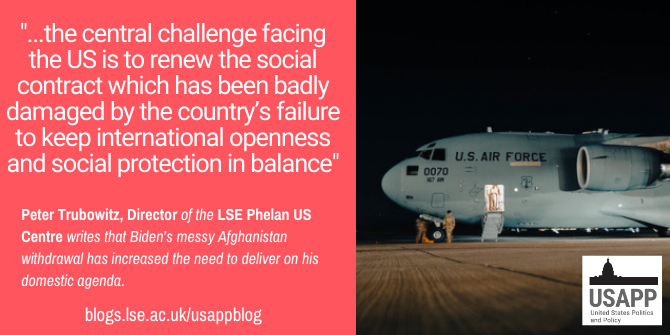 For Biden, the question is, will Americans be talking about Afghanistan fourteen months from now when they vote in the midterm election? If Republican presidential wannabees have their way, then Biden and the Democrats will be back-pedaling furiously from now until the midterms. But barring a string of terrorist attacks against Americans that reinforce the Republicans’ narrative that Biden’s pullout has left the country more vulnerable, I think the Democrats’ fortunes turn on whether he delivers on the principal domestic promises they’ve made: to get the COVID-19 pandemic under control; to produce good paying jobs for working families; and to repair America’s broken social contract. This is where Biden has to deliver if the Democrats have any hope of holding their slim majorities on Capitol Hill in 2022, and if he hopes to avoid being a one-term president.

Ironically, one of the reasons Biden was keen to get out of Afghanistan was to focus more attention on these domestic problems. The messy and costly withdrawal from Afghanistan has only increased the need to deliver on his domestic agenda.

What impact will the failure to defeat the Taliban in Afghanistan have on political support in the US for an internationalist foreign policy?

With respect to Biden’s larger goal of rebuilding domestic support for internationalism, the Taliban’s victory in Afghanistan certainly doesn’t help. However, Afghanistan is not the reason internationalism is in trouble, domestically, in the United States. The problem has more to do with the economic insecurity and social marginalization caused by America’s, and more generally, the West’s overreliance on liberalized trade, institutionalized cooperation, and multilateral governance. This is what has been driving the anti-globalist backlash. Until these root causes of anti-globalism are addressed, support for liberal internationalism will continue to wane in the US and in other Western democracies. Biden understands this and it helps explain his calls for massive infrastructure spending, as well as his efforts to sharpen the focus of the country’s international agenda around China and importantly, climate. Doing so makes it possible for him to bring what the US is doing internationally into closer alignment with what it needs to do domestically — make American economic growth more inclusive and provide a narrative structure to reground internationalism domestically. To be sure, this agenda is unlikely to garner much support among Republicans. But it can help Biden keep independents in his column. In today’s highly polarized America, where political margins are tight, that is no small thing.