In the wake of what many experts have criticized as a mishandled withdrawal of US troops from Afghanistan, President Joe Biden is now looking to move the narrative elsewhere. In this Q&A, Thomas Gift examines the likely political fallout from Afghanistan on the White House, how it will affect the president’s domestic priorities, and the potential consequences for the 2022 midterms.

The last few weeks have been an undeniable jolt to the White House. Biden’s approval ratings have dipped into negative territory. Republicans are using the devastating images out of Kabul to paint a portrait of an unreliable commander-in-chief. Even Democratic allies have questioned how Biden’s recent moves square with a leader who promised to be a steady hand and to restore American trust abroad. Afghanistan was Biden’s first true foreign policy test, and his execution failed. Politically, however, whether this proves to be a temporary blip for Biden—or the start of a protracted loss of political capital—will depend on how effectively the administration can change the conversation. The White House communications office is clearly trying to pivot back to domestic issues. But even here, there’s no safe harbor given continued depressing news on COVID-19, worse-than-expected August job numbers, mounting concerns about inflation, and so on. To the extent that presidents are granted even a modicum of a honeymoon period anymore, we’re well past that with Biden.

It’s possible to overstate how much recent events in Afghanistan will shape what Biden can achieve legislatively at home; any effects will be case-specific. It’s still much more likely than not that the $1 trillion infrastructure bill that’s already passed the Senate will become law, which only requires that Democrats vote along party lines in the House. But Biden’s additional $3.5 trillion spending proposal—which was already going to be a tough sell for the White House to pass through reconciliation in ideal circumstances—might become even less likely. That’s a bill that that’s jam-packed with progressive wish-list items, including on clean energy, family leave, housing, and pre-K schooling. Some Democrats, particularly from swing districts and moderate states, would’ve been reluctant to vote for that bill anyway. But Biden’s diminished political stature might give those lawmakers even more pause about toeing the party line. In fact, there’s already evidence of this hesitation, with West Virginia Senator Joe Manchin demanding a “strategic pause” on the bill, which should concern the White House.

Is there any chance progressive Democrats use Biden’s difficulties to try increase their own political leverage within the party?

Some progressive Democrats may be emboldened by Biden’s troubles and see them as an opportunity to gain an upper hand in negotiations between different wings of the party. But the reality is that, if they go down that route, it will ultimately be at their own expense. For one thing, no one thinks that Biden’s falling poll numbers should be interpreted as anything but disapproval over Afghanistan. The recent downward trend is divorced from what Americans think about progressive agenda items like the Green New Deal, or ambitious social programming. A sure-fire way for progressives in Congress to ensure that their priorities fall flat is to heat up an already simmering war within the party. That will hamper Democrats from enacting legislation in an already fragile political environment, which, in turn, will hurt their chances of maintaining a majority on Capitol Hill beyond 2022. Strategically, progressives would be better off recognizing that the negative press afflicting the White House makes it more important—not less—that they stick with moderates. Like it or not, their political fates are fused together. 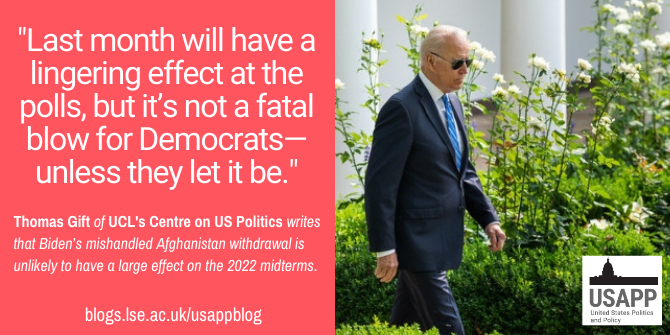 To what extent will the fallout from Afghanistan affect the 2022 midterms?

If Democrats receive a shellacking in 2022—much like the “Republican wave” during Obama’s first term in 2010—we might look to the last month as an inflection point. The party in the White House is usually at a political disadvantage during midterms, which means that Democrats were already fighting an uphill battle to retain Congress. Some forecasters say that the botched Afghanistan withdrawal will still haunt Democrats in 14 months. Others insist that, over that time, the crisis in Afghanistan will have receded into the backdrop. My sense is that Afghanistan will be a factor, but not the main factor in the 2022 midterms. Last month will have a lingering effect at the polls, but it’s not a fatal blow for Democrats—unless they let it be. Despite all the headlines on Afghanistan, data show that about 50 percent of Americans have paid no attention to what’s happening in a country where the US spent almost 20 years and $2 trillion dollars. What’s likely to be more relevant to voters in 2022 is what happens within America’s borders: the pandemic, infrastructure, and employment numbers and the economy generally.