Religion plays an important role in the lives of many Americans. But what role does religion and religious institutions play in motivating Americans to participate in politics? In their new book, R. Khari Brown, Ronald E. Brown, and James S. Jackson look at the role the spiritual and political efforts made by churches to improve human rights. They find that Black Americans are more likely than White and Hispanic Americans to believe that religious institutions have a moral obligation towards human rights activism, but that all groups are more likely to engage in acts like protests if they attend worship settings where they hear sermons about social justice issues and the importance of political activism.

What does religion have to do with Americans’ support for policies aimed at making the nation and world more livable for all? What forms of religious involvement motivate people to participate in politics? And, given the centrality of race to the American experience, should one expect racial group membership to impact these relationships? We tackle these questions and a few more in our book, Race and the Power of Sermons on American Politics.

Detroit’s Central United Methodist Church, an interracial church with a long history of human rights activism, exemplifies our critical findings of the influence of religious congregations on human rights work. During the summer months of protest following Minnesota Police Officer Derek Chauvin killing George Floyd, an unarmed African American, on May 25, 2020, millions of Americans of diverse racial backgrounds from all around the nation participated in protests. In the midst of these protests happening outside of her downtown Detroit congregation on June 5, 2020, Rev. Jill Hardt Zundel, Senior Pastor at Central United Methodist Church, articulated the Church’s ongoing spiritual and political efforts to eradicate anti-black racism. Her sermon embodied Central’s tradition of peace and justice.

Before moving worship services to a virtual format in response to the global pandemic, people walking into the sanctuary saw religious imagery that reinforced the Church’s social justice mission. Long red flags hanging directly behind the pastor’s lectern display the words peace and justice and flank a painting of Jesus and his twelve disciples. The banner reading “Michigan Says No! To War” along with pictures of civil rights icons Fannie Lou Hamer, Rev. Martin Luther King, Jr., labor rights activist César Chávez, or Detroit human rights activist Grace Bogg hang in the sanctuary convey their commitment to human freedom. 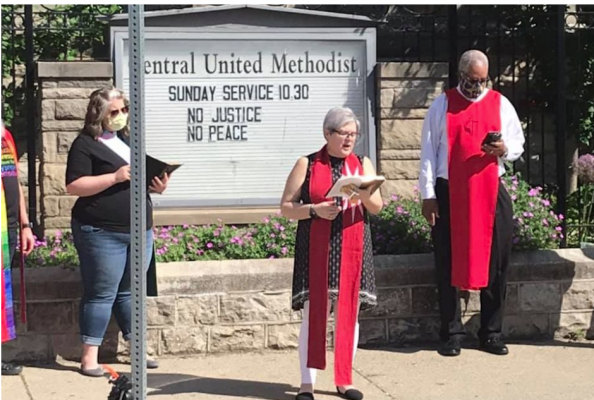 Central’s social justice activism is part of this nation’s long civic-religious tradition whose roots stretch back to our founding. Social interactions with politically astute clergy, laypersons, and participation in interfaith communities in Ann Arbor, Detroit, and Ypsilanti, Michigan inspire us to ask probing empirical questions about the role of religion in our republic. These experiences, combined with the centrality of race in America, also increased our intellectual curiosity about how and why race influences whom is likely exposed to social justice sermons and how exposure associates with support for public policies aimed at increasing human well-being, particularly for the poor and powerless, and various modes of political participation.

Examining the connection between race, sermons, and politics

In our book, Race and the Power of Sermons on American Politics, we used forty-four national and regional surveys conducted between 1941 and 2019 to examine the connection between race, sermons, and politics. Like Rev. Zundel, American religious leaders and congregants who discuss and encourage others to do social justice embrace a form of civil religion that falls closer to the covenantal wing of American civil religious thought. Clergy and members who share this theological outlook frame the nation as being exceptional in God’s sight. They also emphasize that the nation’s special relationship with the Creator is contingent on the nation working toward providing opportunities for socioeconomic well-being, freedom, and creative pursuits. God’s covenant, thus, requires the inclusion of people who may have different life experiences but who, nonetheless, are equally valued by God and worthy of dignity. Adherents to such a civil religious worldview would believe it right to care for and be in solidarity with the poor and powerless, even if they are undocumented immigrants, people living in non-democratic and non-capitalist nations, or members of racial or cultural out-groups.

We find that millions of Americans support their clergy taking such positions when speaking out about race, poverty, immigration, war, and criminal justice. Millions also attend congregations where their political beliefs and behaviors are shaped and/or reinforced by clergy and worship friends. That said, even when accounting for religious affiliation, political partisanship, and social-demographic characteristics, race matters when it comes to the social-political expectations that Americans have of their religious leaders and the civic messages they hear in their houses of worship. In short, Blacks are more likely than Whites and Hispanics to believe that religious institutions have a moral obligation to politically engage systems of power that oppress and deny human rights. Blacks are also more likely than Whites and, to a lesser extent, Hispanics to attend worship settings like Central United Methodists Church where clergy and lay persons encourage them to connect their faith beliefs to local, national, and global social justice work.

Race also impacts the relationship between attending worship settings where one hears social justice themed sermons with support for policies aimed at reducing racism, poverty, xenophobia, and war. As counterintuitive as it may seem, attending political congregations more strongly associates with Whites adopting progressive policy positions than it does for Blacks and Hispanics. It begins to make more sense when considering how racial experiences reinforce and/or shape political attitudes and orientations. White attendees of worship settings like Central are likely to hear sermons that challenge their assumptions about how their theological beliefs square with their ideas about fairness and their own privilege. Those congregation types attract and keep progressive-minded Whites and reinforce their commitment to policies aimed at promoting peace, civil rights, and economic opportunities, particularly for those at the bottom of the social hierarchy. Therefore, White attendees of political congregations tend to share the progressive policy attitudes of Blacks and Hispanics, which may increase the propensity of faith-based coalitions across the color-line. Conversely, for Blacks and Hispanics, attending such worship settings may not associate with their attitudes if those worship settings do not dispute what they already believe governments should do to aid its citizens and its immigrants who are hoping to become citizens, as well as in the promotion of peace.

However, when it comes to the connection between hearing sermons emphasizing human rights and politically acting on one’s beliefs, race really does not matter all that much. By this, we mean Blacks, Whites, and Hispanics that attend worship settings where they hear sermons about social justice issues and the importance of political activism are all more likely than others to vote, protest, contact their elected officials, and engage in varying forms of community activism. For example, in the months following George Floyd’s murder, Black, White, and Hispanic Americans that attended worship settings where they heard sermons that encouraged them to increase their commitment to racial equality, particularly as it relates to ending police brutality towards African Americans, were more likely than others to have participated in some form of protest (see Figure 1 below). 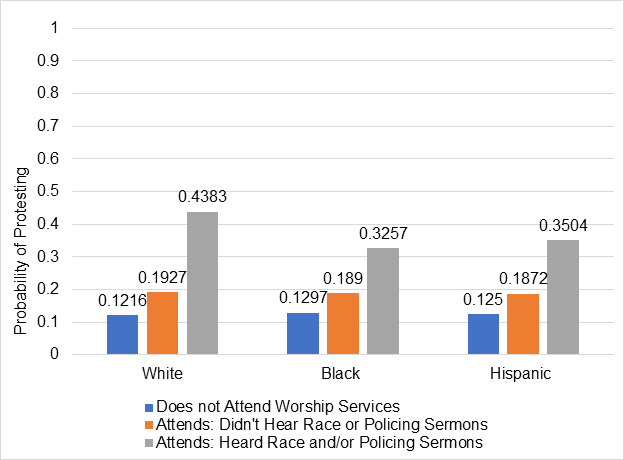 So, what do our findings tell us about the civic health of the republic? It tells us that civic-minded clergy and congregation members (laity) continue to commit time, energy, and hope in the quest to make their communities and the nation move closer to becoming a beloved community. Despite living in an era during which it is difficult to converse with persons of opposing political views, civic-minded clergy and laity are rays of hope. Their constant social justice messaging inspires many to see themselves in the other and, in doing so, push elected leaders to support policies that makes life more meaningful for all.