For much of the 20th century, Black communities and other communities of color were systematically denied mortgage loans – in a practice known as redlining which was backed by the Federal government – leading to decades of disinvestment. Lila Asher examines historical redlining maps in Columbus, Ohio, and finds that they align with present-day areas with greater levels of community vulnerability to disasters like COVID-19, including factors like poverty, disability, and a lack of health insurance. These factors, she writes, have led Columbus City Council to declare that racism is a public health crisis.

In 2020, Columbus City Council, Ohio, declared racism as a public health crisis in recognition of the numerous health disparities between Black and white residents exacerbated by the COVID-19 pandemic. The City Council resolution draws a direct link between racial disparities in health outcomes and the and the history of discriminatory practices such as redlining. Redlining refers to the US Government’s official sanction of racial segregation in housing throughout the mid-twentieth century. Aligning the Census Bureau’s Community Resilience Estimate data with historical redlining maps confirms that areas that faced discrimination due to redlining are more at risk from disasters such as COVID-19.

Redlining maps were a product of the Home Owners’ Loan Corporation (HOLC). Neighborhoods which were home to primarily Black communities or other racial minorities were marked as Grade D–Hazardous and that classification was used to deny them mortgage loans. This practice systematically excluded Black people from fair mortgage rates and led to disinvestment in those communities in the following decades. Beyond contributing to the racial wealth gap, redlining has resulted in persistent health disparities nationwide: studies have shown impacts on birth outcomes, asthma rates, and heat exposure.

As the Columbus City Council and many others have recognized, the early stages of the COVID-19 pandemic disproportionately impacted Black communities, along with other communities of color. Various social factors influenced communities’ vulnerability to COVID-19. The Census Bureau provides an index of many of these factors in their Community Resilience Estimate (CRE), including poverty, disability, lack of health insurance, and communication barriers The index value used for this analysis is the percent of households experiencing three or more of the risk factors included in the CRE.

Figure 1 below combines CRE data by census tract with the HOLC maps digitized at the University of Richmond. Using the ArcGIS Pro Software, the two maps were overlaid on each other and the resulting features are represented along two axes: colors to represent HOLC grade from A (“Best”) to D (“Hazardous”) and color intensity to represent percentage of the population with three or more risk factors. Due to the growth of Columbus since the creation of the HOLC maps, the classification of “X” is used for areas not included on the historical maps. 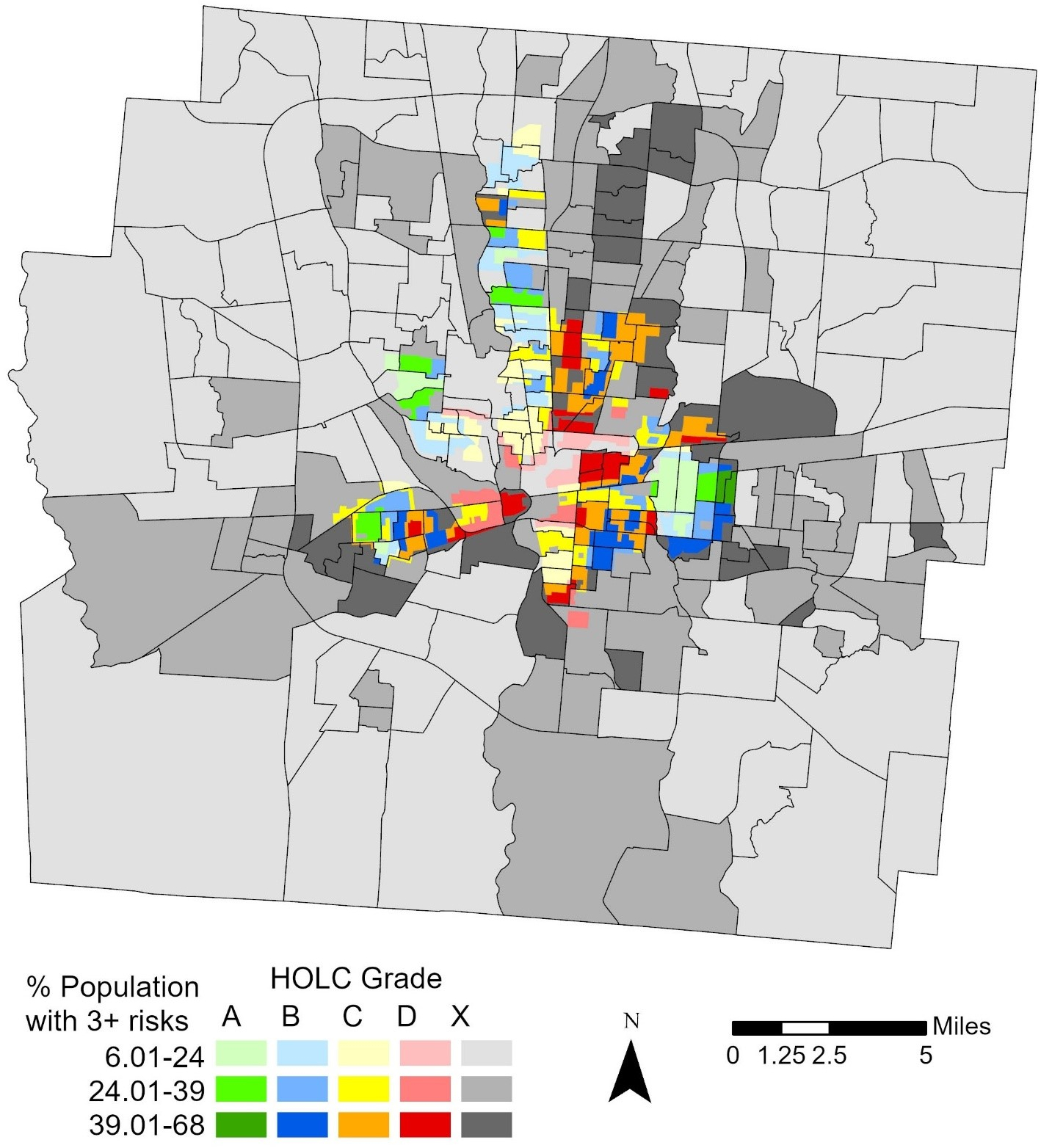 Note: This map displays the percentage of the population with three or more CRE risk factors, with darker shades representing higher percentages, and historical HOLC grades. X is used for areas not classified on HOLC maps.

The areas that were assigned the HOLC grade of D on the historical maps have a higher percentage of the population with three or more risk factors than the areas that were assigned grades of A or B or those ungraded at the time. This can be seen from the map, since the proportion of darkest-shade areas is greater in red than in green, gray, or blue.

These findings are consistent with relationship invoked by the City Council resolution. Neighborhoods that have a history of being redlined (assigned as D-grade) have a higher percentage of residents with three or more CRE risk factors than those assigned as A-grade, B-grade, or ungraded, suggesting that these areas have fewer resources with which to withstand disasters. Recognizing racism as a public health crisis is an important gesture in Columbus and it needs to be followed up with targeted policy and increased funding to these historically oppressed areas.