With no agreement yet reached by Congress over raising the US government’s borrowing limit, the country will effectively run out of money to pay its debts on October 18th. Michele Swers gives an overview of the lead-up in Congress to the current impasse over the debt ceiling, and how partisans are grasping at procedural tools such as reconciliation, invoking the 14th amendment, or even minting a $1 trillion coin to overcome the deadlock.

October 18, just two short weeks away, is the deadline for Congress to raise the debt ceiling to avoid default and a cataclysmic shock to the economy. Yet, Democrats and Republicans in Congress remain at a standoff with Republicans blocking multiple Democratic efforts to raise the limit despite Treasury Secretary Yellen’s warnings of impending economic disaster. Moreover, Republicans insist that Democrats must pass an increase with only Democratic votes and they must utilize a time consuming process known as budget reconciliation, which will push Congress right up to the precipice of default. Given the perilous state of affairs, why are Democrats continuing to try to get Republican support for raising the debt limit and why are Republicans insisting not only that Democrats do this on their own but specifically using the path of reconciliation? The answer lies in political positioning for the 2022 midterms and the increased willingness to weaponize procedural tactics in a polarized Congress, particularly the Senate.

What is the Debt Ceiling and Why Does It Need to be Raised?

Congress authorizes the Treasury department to borrow money to pay obligations such as Social Security payments, veterans’ benefits, or interest on the national debt. When the government reaches the authorized limit, the debt ceiling needs to be raised or suspended. The key point is that the debt limit pays for existing obligations and does not relate to new spending Congress might authorize in the future. Thus, the limit needs to be raised to pay for costs Congress already incurred during the Trump presidency and the early part of the Biden administration including the tax cuts in the Tax Cut and Jobs Act and the additional spending passed on a bipartisan basis to deal with the pandemic. Democrats assert that Republicans have contributed to this spending and should now help with paying the bill as Democrats did during the Trump presidency. Why won’t Republicans reciprocate?

Electoral Competition and the 2022 Midterms

Currently Democrats hold slim majorities in both the House and Senate. The Senate is split 50-50 requiring Vice President Harris to break tie votes. Speaker Pelosi (D-CA) can only lose three Democratic votes in the House, if she cannot secure any Republican support. In midterm elections, the president’s party usually loses seats and President Biden’s popularity has declined in the face of surging COVID-19, the chaotic Afghanistan withdrawal, and continuing economic challenges. While already unpopular in Republican legislators’ states and districts, moderate Democrats are also defying Biden to separate themselves from his problems. Requiring Democrats to pass a debt ceiling on their own can only help Republicans portray Democrats as fiscally irresponsible. They are further emboldened by the fact that with Democrats in control of the House, Senate, and the presidency, Republicans feel no responsibility for governing.

But Why Require Democrats to Utilize Reconciliation?

It all comes down to the politics of procedural warfare over the filibuster in a polarized political environment. While Republicans can practically taste majority control, Democrats are pursuing a dramatic expansion of the social safety net and Republicans have very few tools to block it. In August, Democrats passed a $3.5 trillion-dollar budget resolution through the reconciliation process to lay the groundwork for an ambitious enhancement of programs from health care to education and childcare. Democrats would need to re-open this resolution to add the debt limit increase, a process fraught with parliamentary obstacles. Requiring Democrats to utilize reconciliation consumes limited floor time in the Senate, preventing Democrats from moving forward on their agenda. It also provokes more internal turmoil within the Democratic Party, undermines President Biden’s agenda, and allows Republicans to portray Democrats as tax and spend liberals. 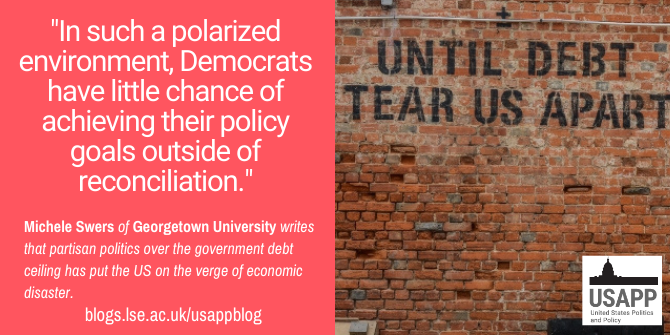 How Does Reconciliation Relate to the Filibuster?

Reconciliation is a procedural carve out that allows Democrats to pursue initiatives that have a substantial impact on the federal budget with only 51 Senate votes rather than the 60 votes normally required to invoke cloture on legislation and avoid a filibuster. In the current highly partisan environment, Republicans are requiring 60 votes for all policy proposals. The filibuster can be used to give the minority voice in policymaking, as it was with the bipartisan infrastructure bill that passed the Senate and is currently stuck in the House. However, Republicans more commonly use the filibuster to block action.

Democrats and Republicans are more polarized than ever in their policy views and minority leader Mitch McConnell (R-KY) is presiding over a caucus that is increasingly confrontational as long-time members retire and are replaced with candidates more aligned with President Trump and his penchant for escalating a fight. For example, Appropriations Committee ranking member Richard Shelby (R-AL) who has brokered numerous deals to extend government spending is likely to be replaced by current House Representative Mo Brooks (AL-5), a fierce Trump loyalist who has been accused of helping to incite the January 6 riot.

In such a polarized environment, Democrats have little chance of achieving their policy goals outside of reconciliation. When Republicans controlled the majority, they had a more limited policy agenda focused on tax cuts and fiscal policies that fit within the reconciliation process. Democrats want government to do more and have an agenda that does not fit neatly into reconciliation. The Senate parliamentarian, who decides what can be included in reconciliation, has blocked some of their goals including an expansion of minimum wage and immigration reforms. With only one shot at reconciliation, Democrats are trying to incorporate a long list of programs that in other circumstances might be debated as individual bills for Medicare expansion or the establishment of paid family leave. Forced to rely only on Democratic votes, it exposes fissures in the priorities of moderate and progressive Democrats.

How Will This Be Resolved?

The danger of tactics like the filibuster and reconciliation stem not from the procedures themselves, but from the willingness of partisans to weaponize these tools in pursuit of their electoral and policy goals. Republicans and Democrats could decide to step back from the brink and allow Democrats to pass a debt limit increase through regular order. Or Democrats could seek new procedural tools to neutralize the Republican gambit. So, we are now hearing proposals for the Biden administration to invoke the 14th amendment – which effectively allow the President to ignore the debt ceiling, or mint a $1 trillion dollar coin – which would circumvent the limit, or for Senate Democrats to eliminate filibusters of the debt limit as Democrats prohibited filibusters for confirmation of lower court nominees in 2013 and Republicans later extended this to Supreme Court nominees. It remains to be seen if Democrats will open a new front in the procedural wars.