The collapse of the Afghan government this summer and the resurgence of the Taliban have been widely regarded as a policy failure following two decades of US involvement in the country. Joseph Stull and Sarah Young look at the lessons from US policy failure in Afghanistan, arguing that policymakers must do more to evaluate policies as they implemented, speed up the policymaking process, spend more time listening to those affected by their policies, and think more closely about policies’ potential outcomes.

The (US) withdrawal from Afghanistan marked the end of a 20-year war, and at the same time, the fall of Afghanistan’s democracy. The failure of any democracy is an important moment in world history. But there is even more the US can learn from this specific failure because of the role we played within it and the current fragility of our own democracy. The US is more divided than ever before from the rancor of the 2020 presidential elections and partisan splits over tackling the COVID-19 pandemic. The 2021 attack on the US capitol, the first major insurrection attempt since the Battle of Blair Mountain labor uprising 100 years ago, is a symptom of how under threat the US system of democracy is today. Now more than ever, it is vital that public administrators and politicians learn from the fall of Afghanistan’s democracy. What lessons can we draw from the US’s policy failures in Afghanistan?

Policy implementation is difficult because it requires public servants to interpret the policy goals set by politicians and apply them in very complex situations. With the end of Operation Enduring Freedom, there have been no shortages of analyses of the Biden Administration and their handling of the withdrawal. These analyses assess how the practical application of policy fits theory and is necessary for a functioning democracy. However, it is easy to Monday morning quarterback what happened in the failure of moving from theory to practice. These policy analyses should not be occurring only after a policy failure. Public administration scholars and practitioners must do more of this during the implementation process to learn from the practice and the outcome.

This type of formative evaluation occurs across many disciplines, from international politics to conflict studies. Practitioners and scholars must look beyond the boundaries of public administration and policy and incorporate pertinent input from other disciplines. For example, many evaluative works from military sciences assessed the success and failures of Operation Enduring Freedom over the past twenty years. Seth G. Jones (2009) “Graveyards of Empires, America’s War in Afghanistan” had insightful implications that could have been useful to policy formulation, including a scarily accurate forecast of what was to come. Utilizing this type of timely, interdisciplinary evaluation will facilitate a deeper understanding of the policies being put forth in the moment.

We must assess policy successes and integrate knowledge across disciplines throughout the policy process to better understand what makes policy successful, and what does not. Only by learning from other disciplines and comparing policy wins and failures throughout the process can we identify policies that effectively promote and protect democracy, both at home and abroad.

It is not surprising that, after 20 years, many Americans supported an exit from Afghanistan. There is a generation of veterans whose entire career is based on this single conflict. And there is a new generation of military personnel that was not yet born when 9/11 occurred and may not fully comprehend the magnitude of this war’s genesis. This distance, in terms of time and space from the beginnings of Operation Enduring Freedom, might help to explain many Americans’, from civilians to military personnel, ambivalence towards or their desire to withdraw from the conflict.

Society is shifting and evolving faster than at any point ever before in history, but policy is still slow to learn and slower to act. The last twenty years have given birth to the rise of Facebook and Amazon, legalization of same-sex marriage, iPhones, the Affordable Care Act, and many other things. Yet, many of the policy goals and much of the policy process remain roughly the same. And while that is a necessary and critical component of democracy, at the same time we must find ways to match the evolution rate of policy with that of the people it represents. Slow policy is inept policy. In this case, the glacial pace of US policy had systemic effects in terms of the mental and physical health of military personnel; an undue burden to the US defense budget; and perhaps most importantly the daily lives of millions of Afghan people who spent the last two decades living in the constant turmoil of a war zone. 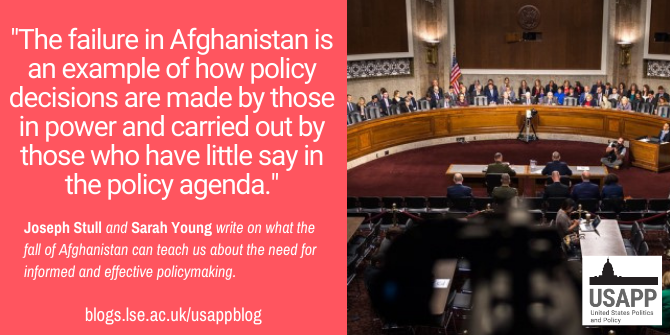 Policymakers’ time would be much better spent listening

The failure in Afghanistan is an example of how policy decisions are made by those in power and carried out by those who have little say in the policy agenda. In addition, the public servants responsible for carrying out policy implementation have even less power over how those policies will be received by the general public.

The US helped to secure and train new military and police forces in Afghanistan and Iraq. We poured money into community resources to win over local support and gain intelligence. The US military entered Afghanistan to carry out the policy goals set by the politicians back in the US, many of whom had never seen Afghanistan, had little understanding of Afghan culture, or ever served in a war zone. Yes, they had military intelligence and foreign affairs officers to consult, but speak to almost any infantry Marine who served in Iraq or Afghanistan, and they will tell you how difficult it is to “win hearts and minds” when the people do not want it.

The partnerships built by US and Afghan leadership (being those the US chose to empower) exemplifies the lack of US policymaker’s understanding, or caring, about the Afghan peoples’ wishes. Throughout the entirety of the conflict, the US effort was continually undermined by human rights violations conducted by Afghan leadership and those the US relied on to help stabilize the region. These abuses, along with counterterrorism attempts gone horribly wrong, fueled a disillusionment – if not an outright hatred – in many young Afghans for the US’s involvement in their country. Instead of furthering the policy agenda, these partnerships led to a new generation of Taliban and the rise of the Islamic State (ISIS) in Afghanistan. If nothing else, US policymakers’ lack of empathetic listening and understanding about what was truly occurring on the ground undermined the policy agenda. How did the atrocities occurring within the country for the last twenty years go on with little to no recognition by those in charge of charting a course for Afghanistan’s democracy? Perhaps it was the geographic separation of policymakers, or perhaps they just didn’t spend enough time or effort listening and trying to understand the root cause of the peoples’ ambivalence.

The world is not flat, so policy must be well-rounded

Today’s world is a globally interconnected system and US policy decisions have long-lasting effects outside of the US. For example, the US withdrawal from Afghanistan had profound effects on the Afghan people. Former government workers, and their immediate and distant family members, are being hunted and killed. People are being publicly whipped on the streets. Women have not been allowed to return to school. And almost 10 million Afghan children are in a severe malnourishment crisis. While this humanitarian crisis may or may not have been avoidable, good policy can prevent such outcomes from happening again through better forecasting of the impacts to the whole system. One such example is The Ocean Panel’s recently adopted Sustainable Ocean Economy initiative. Fourteen countries representing 40 percent of the world’s coastline agreed upon an action agenda to achieve 100 percent sustainable ocean management. This global policy forecasts how specific actions in five key areas will disrupt the demise of the ocean economy, revitalize dangerously diminished fish populations, and stop plastic pollution. Good, interconnected policy must map the components of a system and forecast the impacts to the whole system. Doing so not only saves lives and dollars but could also help to rewrite a nation’s, or the world’s, future.

The fall of Afghanistan shows us what happens when policy fails. This failure and the hurt it has caused to the Afghan people should not be in vain. There are important policy lessons to be drawn from this critical moment in history. Foremost, we must remember that at the heart of any policy should be the people it affects. In Afghanistan, the policies came from a foreign power, not the people. But it is only the people that can give a policy its legitimacy.

Joseph Stull – University of North Georgia
Joseph Stull is a former United States Marine and combat veteran who served in Iraq. He is completing a Master of Public Administration degree at the University of North Georgia and entering a doctoral program in public administration soon after. Joe has ten years of experience in public schools teaching American Government and Politics. He can be reached at Jwstul0130@ung.edu and www.josephstull.com.

Sarah L. Young – Kennesaw State University
Sarah L. Young, Ph.D. is an Associate Professor in the School of Government & International Affairs at Kennesaw State University. Her research uses systems-based approaches to study nonprofit and public management, community engagement, and social equity during crises. Dr. Young’s mother grew up in Kabul, Afghanistan. She can be reached at SHinkelY@Kennesaw.edu, www.NonprofitPhD.com, or @Nonprofit_PhD.