For public servants working in government, understanding citizens’ needs is incredibly important, and those working in small towns are no exception. In new research, Jason D. Rivera looks at the techniques policymakers in Grand Island, New York, use to understand the needs of their citizens. He finds that while public meetings, townhalls and social media can give a sense of what the public wants, they can also give a false impression when vocal groups push their own sentiments. In contrast, one-to-one meetings between public servants and citizens can often be the most effective way of determining what members of the public want.

Over the last half century, the American public has become more and more dissatisfied with policymakers’, and other public servants’, accountability to the citizens. This dissatisfaction partially stems from feelings among the citizenry that they have a decreasing influence on government’s actions and policy-development. In response, New Public Service (NPS) has emerged as a governance scheme to recenter policymakers’ focus on understanding the interests of the citizenry using accessible and inclusionary deliberative techniques. However, despite the twenty-odd years NPS has been used to guide governance practices, there is a lack of evidence and understanding on what techniques are effective for policymakers in understanding the citizenry’s authentic interests. Moreover, although theory abounds related to NPS practices, local municipal examples are lacking.

Understanding how policymakers can best understand their citizens

As a means of trying to uncover what deliberative techniques are effective for policymakers to understand the citizenry, my colleague and I engaged in a research study on Grand Island, New York. This town in Western New York along the Niagara River, is comparable to other small suburban towns throughout the nation and the geographical region. Specifically, the population is generally homogeneous (i.e., predominately White and middleclass) and the majority of citizens commute into larger urban areas for employment, such as Buffalo and Niagara Falls, New York.

Using Grand Island as a research context, we interviewed locally elected town officials and the heads of public departments and agencies. Based on the analysis of these interviews, we found that the most effective way to understand the local citizenry’s policy interests are through one-on-one conversations. Specifically, policymakers and public servants widely indicated that to understand what the public generally values and wants requires speaking with individuals in intimate settings as opposed to speaking with people in large groups or over social media.

Although the notion that policymakers’ engagement with citizens in townhall meetings or public hearings has been argued to have marginal benefits to either decisionmakers or the public for many years, the reason for the lack of effectiveness is less understood. Additionally, as the use of social media becomes ever-present in politics and public policy, our study indicated using these techniques is a double-edged sword. On the one hand, elected officials and public servants are expected, and sometimes required by law, to engage in these practices to gauge public sentiment. Policymakers and public servants can get an aggregated sense of what the public (or more precisely those that vocalize their opinions) generally wants. As one official stated,

…they [social media outlets] can at least give you a rough idea of what some people, feel, but you have to be able to weigh those opinions accordingly.

On the other hand, the use of these public, large group interactions can provide policymakers and public servants a false impression of what the public wants. As another official indicated,

…for every one conversation where someone is taking a stance, there’s five people who will message me privately and say, “I feel differently than this, but don’t want to put it out there in the public for everyone to see.

Along these lines, the sentiment was shared among various officials that using social media, public hearings or townhall meetings to understand public interests has the potential to have at least two negative results. That the “loudest” participant or group of people typically has the potential to make their position be perceived as the general sentiment of the public, regardless of whether their interests or opinions are truly representative of the whole. As a result, policymakers can develop and implement policies that are in the interests of a minority as opposed to the majority, which is totally contrary to the purpose of the public deliberation. Or, and in some cases also, the public event itself fosters an environment of informal social control. Along these lines, segments of the population are socially pressured to conform to and publicly support the views of others even when they harbor alternative or opposite interests out of fear of social ostracization. 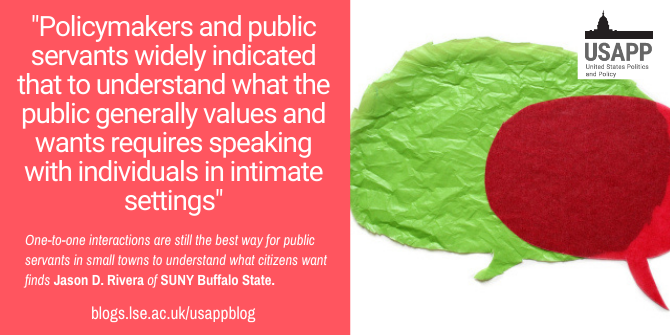 In response to this situation, many elected officials and public servants prefer to engage citizens in personal two-way, one-on-one, communication. For many public servants, these types of interactions provide the best way of learning about what various members of the citizenry want for the community because members of the public are more comfortable with expressing their personal positions without fear of reprisal from their neighbors.

However, even if all citizens are spoken to in this way, policymakers and public servants may still not have a true understanding of what the citizenry wants because these respective representatives of the public define to whom they are accountable differently. Along these lines, when elected officials and public servants were asked who they should be most accountable to, many divided the citizenry into subgroups. Specifically, although these officials are legally responsible for pursuing and acting on the interests of all residents within their jurisdiction, only two saw this as their level of accountability. More commonly, officials indicated that they were accountable to different subsets of the public, such as those that voted for them, property owners, and/or business owners, and even prioritized these different groups.

Our study of the practice of New Public Service principles confirms findings in other contexts in relation to use of various techniques used by policymakers to “better” understand citizen interests. Furthermore, it highlights potential challenges related to public deliberations (both in person and virtual) that have the potential to further dissolution the public and aggravate democratic practices. Although we are limited by our study’s research design in making broad sweeping generalizations, we would say that the observations made in our study may not be confined to a small town in Western New York. But it may be something more characteristic of small-town policymaking and policy deliberation than we would like to think.