Widely believed to be a Democratic-leaning state by many political pundits, this week’s Virginia gubernatorial contest saw electoral victory for Republican Glenn Youngkin. Lauren C. Bell writes that the contest and results show that local politics are still important, with Youngkin running a campaign focused on Virginia issues as his Democratic rival, Terry McAuliffe, tried to overcome lackluster enthusiasm by attempting to nationalize the election.

It would be hard to overstate the bad news for Virginia Democrats in the November 2 gubernatorial election results. Republican candidates swept the statewide races. The Democratic party lost its majority in the House of Delegates, with Republicans winning at least 50 out of a total of 100 seats. Almost every locality in Virginia shifted toward Republicans; even in localities and counties where the Democrats won more votes, they won by much smaller margins than in either of the previous two gubernatorial election cycles. These outcomes aren’t the result of any one factor; instead, they reflect cascading problems for Democrats: an uninspiring nominee, a deep-pocketed challenger, a campaign that clung to a losing strategy, an unpopular Democrat in the White House, and lower levels of support for Democrats nationwide.

To understand what happened on November 2, it’s first necessary to review how each of the gubernatorial candidates ended up on the ballot. Virginia permits its political parties to decide what method to use to nominate candidates, and these methods can change from election to election. Democrats have long used primary elections—open to all registered voters, since Virginians do not register by party—while Republicans have more frequently used conventions of party elites to choose their party’s nominee. In May 2021, Virginia Republicans again held a convention but for the first time used ranked-choice voting to select Glenn Youngkin, the former head of the Carlyle Group private equity group and political novice, after six rounds of balloting. Youngkin defeated both an establishment candidate in former Speaker of the House of Delegates Kirk Cox, as well as Amanda Chase, who referred to herself as “Trump in heels.”  A month later, Democrats nominated former Virginia governor Terry McAuliffe in a traditional primary election (Virginia is the only state in the US that limits governors to a single four-year term, but the state does not prohibit former governors from running again for non-consecutive terms.)

But from the beginning, many Democrats weren’t enthusiastic about McAuliffe’s candidacy. Many Virginians love their single-term governorship, seeing it as an essential check against career politicians dominating state governance. Indeed, it’s been 50 years since a former governor, Mills Godwin, was re-elected to a non-consecutive term (1966-70 and 1974-78), and some Virginians simply think that former governors should not run again. More significantly, McAuliffe was a late entry into the Democratic primary and he ultimately won the nomination over two African American women state legislators and an African American lieutenant governor (albeit one that might have had difficulty winning in light of personal scandals). McAuliffe’s nomination turned off many progressive Democrats, who saw McAuliffe’s late entry into the race as deliberately undermining opportunities for two highly-qualified African American women in order to advance his own political interests – a particularly bad look after a fraught year of reckoning on Virginia’s, and the country’s, racial history in the wake of the murder of George Floyd.

McAuliffe sealed the nomination largely on the basis of his claims that his prodigious fundraising skills and previous electoral success would be essential to win the off-year gubernatorial election. But his fundraising skills meant little when matched against a former private equity manager who donated $20 million of his own money to the campaign. His fundraising advantage blunted, one might think the McAuliffe campaign would have ramped up its efforts at old-fashioned shoe-leather campaign techniques aimed at canvassing voters and turning out the vote. Or, that the campaign would have coordinated with the Democratic campaigns for House of Delegates, which were happening across the state. Or, perhaps the campaign might have worked to counter Youngkin’s relentless messaging on the harms of overzealous local school boards and McAuliffe’s own gaffe that provided fodder for the attacks. But the McAuliffe campaign did none of these things—at least not effectively.

Insider accounts reveal that the McAuliffe campaign focused almost exclusively on Northern Virginia—a densely populated area that was almost certain to support him already. Elsewhere, however, there were few announced campaign or canvassing events until very late in the campaign. Local candidates and activists across the state struggled to get the attention or support of the McAuliffe campaign as they worked to turn out Democratic votes in their own races. My own 500+ home suburban neighborhood in Henrico County, just north of Richmond, which regularly sees canvassers from both parties, was canvassed by the Youngkin campaign but wasn’t canvassed by McAuliffe despite its Democratic lean in previous elections. 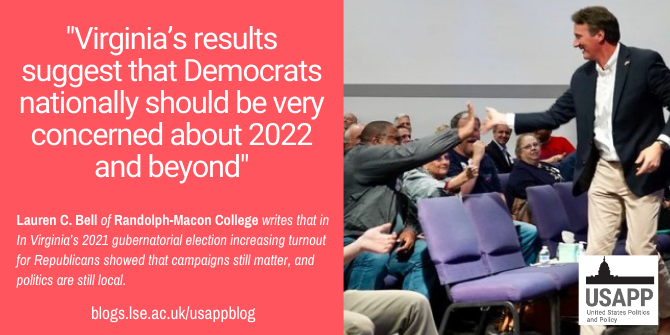 Pundits and political scientists alike point to nationalized races as explaining the Democrats’ strong showing in the recent elections in which they’ve done well. But those elections were much more obviously referenda on Donald Trump, who was either on the ballot or in office. This time, however, Democrats are in control of the White House and Congress and their popularity is flagging. And, while Glenn Youngkin may have borrowed Trumpian talking points on things like Critical Race Theory and government intrusion into people’s lives, he was localizing these issues, focusing on parental involvement in schools and on a call to eliminate the grocery tax. Even with increasingly nationalized elections, Virginians have long approached politics with an expectation that their representatives will be focused on them more than on what’s happening in Washington DC (see, for example, Eric Cantor’s loss to Dave Brat in the 2014 Virginia Republican primary election), a fact that seemed to elude the McAuliffe campaign.

McAuliffe’s efforts to nationalize the election not only failed to blunt Youngkin’s momentum, but turnout levels across the state, especially among Republicans, exceeded the levels from the last gubernatorial election in 2017. Turnout gains were particularly strong in rural counties, which are substantially more Republican leaning. Meanwhile, even in urban and suburban counties where McAuliffe ultimately won, the margin of victory for Democrats shrunk as compared with 2017, while swing counties reverted back to pre-2017 voting patterns. Just south of Richmond, McAuliffe lost Chesterfield County by nearly five points —a county that Biden won by nine points in 2020 and that Democratic US Senator Tim Kaine won with 54 percent of the vote in 2018. As Figure 1 shows, across four major regions of the state, the proportion of the vote share captured by Democrats was universally down – dramatically so in the area that encompasses Hampton Roads and Virginia’s Eastern Shore. 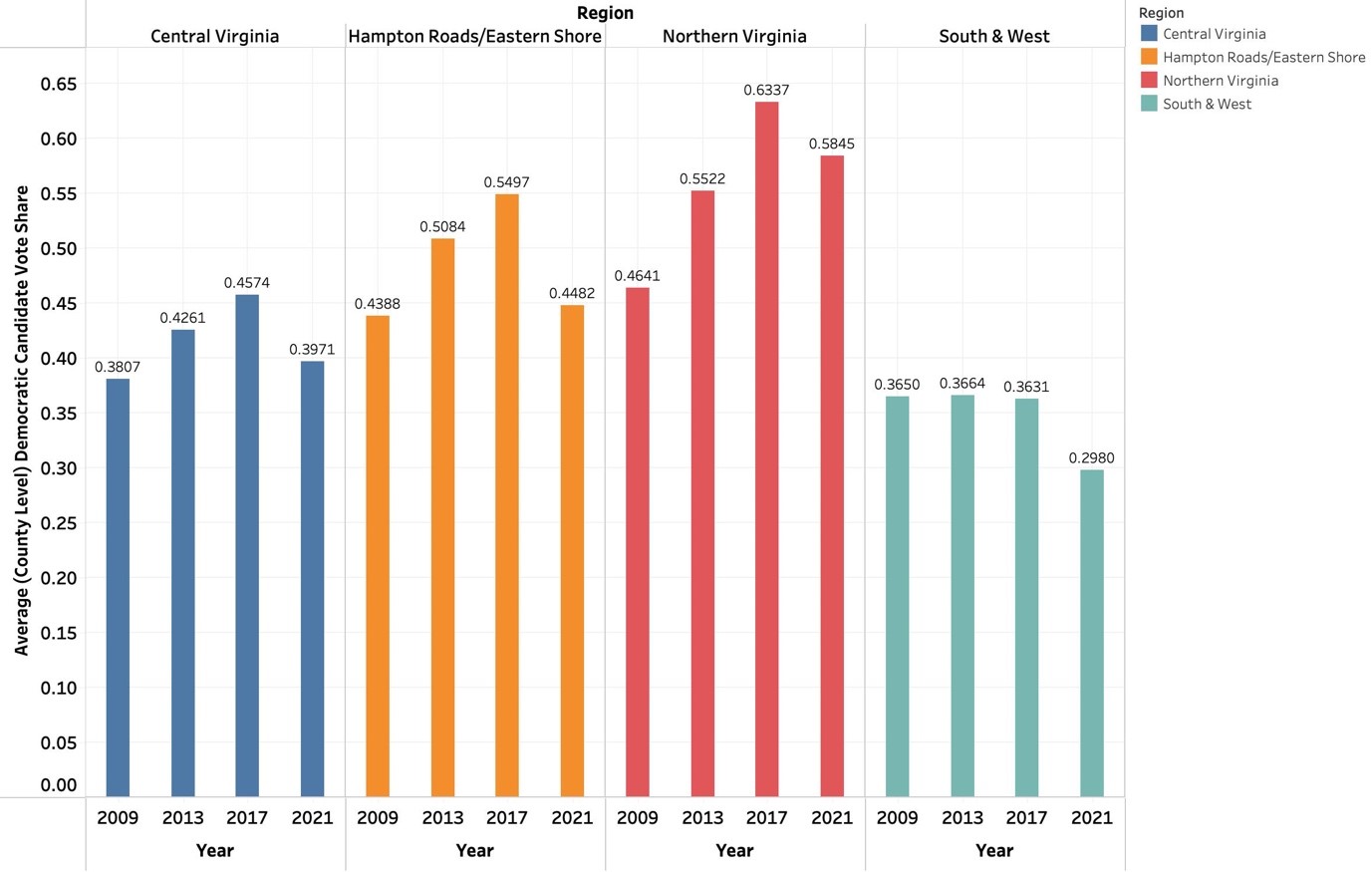 Note: Data is from the Virginia State Board of Elections

Republicans are mobilized ahead of 2022

In Virginia’s 2021 gubernatorial election both the candidates and their campaigns mattered. Virginia also saw the impact of changes to election laws in 2019 and 2020 that allow early and easier voting; this pushed turnout higher than in any of Virginia’s off-year elections held in nearly 30 years.

That increase in turnout appears to have almost entirely benefitted Republicans. Virginia’s results suggest that Democrats nationally should be very concerned about 2022 and beyond. State-level, off-year elections are typically of limited utility for judging future national-level outcomes, but Virginia’s gubernatorial election results suggest that Republicans are mobilized and energized and that Democrats—at both the state and national levels—are not fielding candidates who resonate or offer enough meaningful policy positions to energize their voters, now that a vote for the Democrats is no longer simply a vote against Donald Trump.