In The Commons in an Age of Uncertainty: Decolonizing Nature, Economy, and Society, Franklin Obeng-Odoom explores scholarship on the commons, showing the weaknesses of existing conceptions and pushing for a more radical vision of commoning land that is bound up in transforming our wider social, political, economic and environmental systems. This book opens an avenue for imagining the possibilities of a new world anchored on the commons, writes Maano Ramutsindela.

The Commons in an Age of Uncertainty: Decolonizing Nature, Economy, and Society. Franklin Obeng-Odoom. University of Toronto Press, 2021. 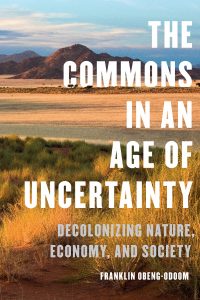 The planetary emergency of our time has galvanised people and institutions around the world to work towards preventing the looming catastrophe. The message from scientists is clear: Earth has reached its limits and both the planet and life on it face existential threats! Many of the suggestions on what needs to be done are not new but can be traced to ideas and proposals that have long been in the public domain, including the vision of the ‘Club of Rome’ that circulated half a century ago. A common thread that runs through past and present ideas of saving the planet and the ongoing concerns with the future of life on earth is the global question of how to lay the foundation for a socioecological, just society in a world characterised by inequalities and the exploitation of the environment as well as people.

In The Commons in an Age of Uncertainty, Franklin Obeng-Odoom tackles this question by juxtaposing the work of two influential theorists of the commons, Garrett Hardin and Elinor Ostrom, and their adherents, to refresh the debates on the commons. To do this, he provides the reader with a condensed but well-articulated overview of the scholarship on the commons and the political economy of natural resources.

This overview is intended to highlight the weaknesses of well-known theories of the commons. Obeng-Odoom categorises the scholarship on the commons into ‘Conventional Wisdom’ and the ‘Western Left Consensus’. The Conventional Wisdom associated with the work of Hardin denotes the well-established belief that the commons can and should be protected and sustained by turning them into private property. It advocates the use of markets to resolve social problems. Obeng-Odoom’s critique of the process and consequences of privatising the commons is aligned with critical social science research, which points out that the privatisation of nature has resulted in more environmental and social problems. 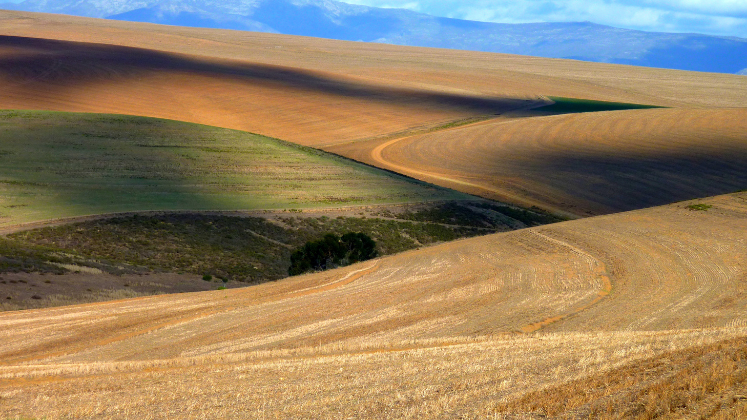 But Obeng-Odoom add two important insights to this research. First, he brings land into the centre of the analysis of the commons to argue that commodified land ceases to be common. Second, he highlights that framing the problems of the Global South in ecological terms not only entrenches the power of the Global North over the region but also enables the privatisation of the Global South. This way, the privatisation of nature has demographic and geographical attributes.

Turning to the Western Left Consensus associated with the work of Ostrom, Obeng-Odoom views cities as commons because they are commonly created and shared around urban land, and city residents have the common rights to the soil as clearly expressed by activists, who push for the right to the city.

However, Obeng-Odoom is not convinced that Ostrom’s analysis of the urban commons provides an alternative to Hardin’s view on privatisation. He traces Ostrom’s analysis to the idea of urban commons and the notion of consumer sovereignty to argue that the analysis overemphasises a public choice approach to socioecological problems. It is premised on the belief that small urban communities can successfully govern themselves in gated estates through rules without the intervention of the state. According to him, Ostrom considers gated communities, informal economies and slums as urban commons and preferred to use environmental taxes and a change of behaviour in residents in urban commons as a solution to urban ecological crisis. In doing so, argues Obeng-Odoom, the Western Left Consensus ignores that informal economies grow from oppression rather than freedom, are maintained by oppression, segregate communities and destroy the environment.

Throughout the book, Obeng-Odoom uses the critique of the Conventional Wisdom and the Western Left Consensus to lay the foundation for his proposed ‘Radical Alternative’. The pillars of the Radical Alternative include just land, the creation of the social state and replacing rentier capitalism and its institutions with commons-based systems. Just land denotes commoning land by reclaiming it as the commons and protecting it from commodification. Here, commoning land is a necessary condition for transforming our social, political, economic and environmental systems. Obeng-Odoom uses conceptions of land rooted in pre-colonial Africa to demonstrate the value of this process. This raises questions of how commoning land in Africa and the wider Global South takes place after the disruption of landed relations by both colonialism and the world capitalist system. Ongoing land reform programmes driven by post-independent states complicate the process and purpose of commoning.

For its part, the social state should underpin the Radical Alternative by reflecting the values and aspirations of the society it serves. In other words, the social state should drive the march to the commons and inclusive prosperity. This way, it should be an antithesis of the capitalist state. This is a bold proposal that requires the transformation of the state in the Global South. The proposal begs the question of how such a state could emerge in a world system that constrains the functioning of states while also transforming them. This question is more pertinent in Africa, where the author draws most of his examples. Social scientists would be interested in how such a state takes its form since it is neither market socialism nor state socialism. The third pillar, of commoning rent, has the potential to reverse the social, economic and ecological ills caused by rent theft. Such theft takes place when rent created by society is extracted and appropriated privately.

Throughout the book, Obeng-Odoom emphasises that both Hardin and Ostrom and their followers have misdiagnosed the socioecological problems and offered misinformed solutions. They neglect the internal and external conditions of the commons that account for the distribution and control of natural resources. The author is provocative and provides a nuanced analysis of the political ecology of cities, technologies, oil and water. He challenges land economists and suggests a new ecological political economy founded on the conceptualisation of land as a methodological approach. For him, landed property relations should be considered a research approach by which we can deepen our understanding of land not only as one of the key factors of production but also as the identity of Africans and black societies globally. In The Commons in an Age of Uncertainty, Obeng-Odoom opens an avenue for imagining the possibilities of a new world anchored on the commons.