In Aid Imperium: United States Foreign Policy and Human Rights in Post-Cold War Southeast Asia, Salvador Santino F. Regilme Jr. explores how US foreign strategic support has impacted on human rights abuses in Southeast Asia, focusing on the Philippines and Thailand. This is a timely and thought-provoking read for scholars researching human rights, as well as readers interested in learning more about US foreign policy in Southeast Asia since the end of the Cold War, writes Kai Chen. 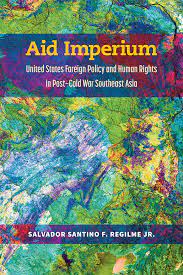 Salvador Santino F. Regilme Jr.’s Aid Imperium advances interest convergence as an explanatory framework to explore the extent to which US ‘foreign strategic support’ (referring to both foreign aid programmes and public diplomacy) undermines human rights abuses (such as extrajudicial killings, physical harassment and torture) in recipient countries. The study focuses particularly on the Philippines and Thailand as recipient nations in the context of post-Cold War Southeast Asia. These two countries have ‘heavily depended on the United States in terms of political and economic support’, as ‘US mutual defence treaty allies’ (8). More importantly, the ‘War on Terror’, advocated by the US in the post-9/11 era, has significantly impacted the human rights situation in the two nations.

In the theory of interest convergence, Regilme suggests that the shared interests and policy expectations of donor and recipient governments, combined with the domestic legitimacy of the latter, are the main independent variables which significantly impact the human rights situation in recipient countries.

Using this interest convergence theory, the author examines how ideational and material factors have jointly shaped the ways in which US foreign strategic support has been used in the Philippines and Thailand. As Regilme suggests, ‘in its quest to attract foreign strategic assistance, a prospective aid recipient government strategically adapts its discourses and policy preferences to the interests of the potential donor government and its own domestic public’ (219).

Photo by JC Gellidon on Unsplash

During the presidency of Gloria Macapagal Arroyo (2001-2010), the Philippine government used terror-oriented US foreign strategic support to strengthen domestic counterterror operations. As a result, the ‘War on Terror’ had significant impact on the relationship between the US and Arroyo administration, while producing indirect impact on the human rights situation in the Philippines. For instance, human rights abuses occurred as part of the nationwide policy, which was represented by extrajudicial killings conducted by the ‘local government-sponsored ‘‘death squads’’ under the rubric of counterterrorism’ (96). However, armed conflicts still persisted in many conflict-prone areas, and the Philippines used US foreign strategic support to organise local militias and paramilitary units for ‘reliable domestic intelligence and additional logistical support’ (102).

The case of Thailand is similar to that of the Philippines. When the US and Thai governments have had shared policy expectations regarding human rights protection and the Thai government has had strong domestic legitimacy, the number of human rights abuses have declined.

In the 1990s, the Thai government had strong domestic legitimacy. Due to the confluence of the shared policy expectations of the Thai and US governments, state-initiated abuses were lower. At that point in time, human rights abuses were primarily carried out by individuals of the Royal Thai Armed Forces and the Thai Royal Police: that is, ‘abuses that emerged from regular criminal policing operations’, and ‘abuses that emerged from police and military encounters with civil society activists’ (62).

In contrast, when the Thai and US governments mainly focused on the policy agenda of counterterrorism and the Thai government had weak domestic legitimacy, such as in the era of Thaksin Shinawatra (2001-2006), this led to the increase in human rights abuses.

Moreover, in the worst-affected areas of extrajudicial killings, enforced disappearances and other human rights abuses, there are divisions within local perceptions of the negative impacts (such as corrupt practices) produced by the foreign strategic support provided by different countries. In the Philippines, we cannot exclude the possibility that different stakeholders (central government, local militias, paramilitary units and insurgents) may have different opinions with respect to this issue. The case of the Philippines has its counterpart in southern Thailand, where the security situation has been more complicated than in the Philippines.

Aid Imperium clearly demonstrates the complexity of US foreign strategic support in different contexts, and it offers well-considered insights into the main independent variables that impact on the human rights situation in recipient countries. This book will undoubtedly find a place among scholars, students and general readers interested in US foreign aid programmes and public diplomacy for years to come.

Kai Chen – Xiamen University
Kai Chen is an assistant professor at the School of International Relations, Xiamen University, and an academic visitor affiliated with the University of Oxford China Centre (2021-2022).