While lesbians, gay men, bisexuals, and transgender (LGBT) employees in the Federal service no longer experience explicit discrimination, they see it as less fair compared to heterosexuals, according to new research from Gregory B. Lewis and Blake Emidy. They find that the perceptions of LGBTs about the fairness of the Federal service varies by race, gender, disability status, sexual orientation, position in the government hierarchy, and by age, highlighting the importance of using an intersectional approach when examining discrimination.

The federal service has become a much better employer of lesbians, gay men, bisexuals, and transgender (LGBTs). For decades, it explicitly discriminated against them: outlawing civil service employment until the early 1970s, routinely denying security clearances until the mid-1990s, and banning open military service until 2011. The Civil Service Reform Act of 1978 arguably prohibited anti-LGBT discrimination in the US civil service, and Presidents Clinton and Obama issued executive orders banning it in stronger terms.  Dramatically rising public acceptance of homosexuality has made all workplaces more welcoming over the past three decades.

Still, one-third of Americans condemn homosexuality as always wrong, 5 percent of LGBTs say they have experienced employment discrimination in the past year, and gay men earn about 10 percent less than comparably educated and experienced heterosexual men in the general economy. Analyses of the Federal Employee Viewpoint Survey (FEVS), an annual federal survey of its employees, have documented how differently LGBT and heterosexual employees experience the federal workplace. LGBTs rate their leaders, supervisors, and coworkers worse; are less satisfied with their jobs and pay; consider their workplaces less fair, open, cooperative, supportive, and empowering; and have lower work engagement and higher turnover intention.

Our study shows both that (1) LGBTs see the federal service as less fair than do comparable heterosexuals in each gender, race, disability, age, and status group and (2) disparities in perceptions are wider for women than for men; for Blacks, Latinos, and Asians than for Whites; for those with than without disabilities; for those lower in the federal hierarchy; and for bisexual compared to gay men. This contradicts both the implicit assumption of most prior research that being LGBT impacts all groups similarly, as well as the contrary notion that only pampered gay white men care about anti-LGBT discrimination. Instead, it aligns with intersectionality theory, which argues that those who belong to two minorities face double jeopardy, because the two forms of discrimination have compounding effects.

Intersectionality theory suggests that LGBTs who face additional types of prejudice may experience more discrimination than the sum predicted by their multiple identities. Further, many LGBTs’ ability to “pass” as heterosexual makes their presence less obvious, which may leave LGBTs, especially LGBTs in smaller and less powerful groups, feeling more isolated and less aware of allies who might help push back against unfair treatment. Lesbians, LGBTs of color, LGBTs with disabilities, and young LGBTs at the bottom of the federal hierarchy should have the least power, and bisexuals may be the most closeted and isolated.

FEVS does not include a direct measure of discrimination, but we substitute perceptions of organizational justice, a standard measure of whether employers distribute pay, promotions, and recognition fairly and use consistent and ethical procedures to do so. Using data on 1.3 million employees (including 42,000 LGBTs), we tested whether LGBT-heterosexual disparities in justice perceptions were larger for those in other marginalized groups. 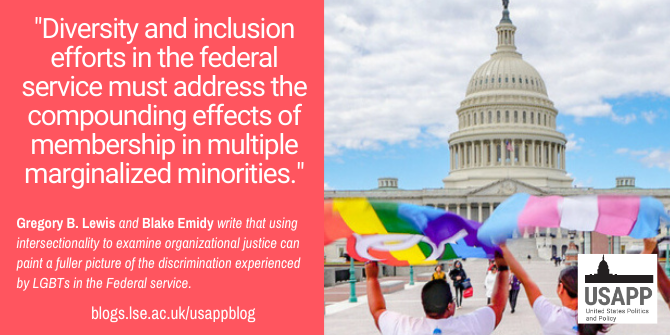 The overall LGBT-straight difference in perceptions of organizational justice was larger than race and gender differences and as large as the gap between employees with and without disabilities. Further, LGBTs rated justice worse than heterosexuals in each sex, race/ethnicity, disability status, age group, and hierarchical level. In Figure 1, for instance, LGBTs rated justice 0.09 lower than comparable heterosexuals among white men and 0.14 lower among white women (shown by the dots). The 95 percent confidence intervals (shown by the lines) are quite narrow, leaving no doubt that LGBTs perceive less justice than heterosexuals in the same group for the federal service as a whole. Confidence intervals are wider for the smaller race-sex groups but still completely negative – LGBTs in each group perceive less organizational justice than comparable heterosexuals. 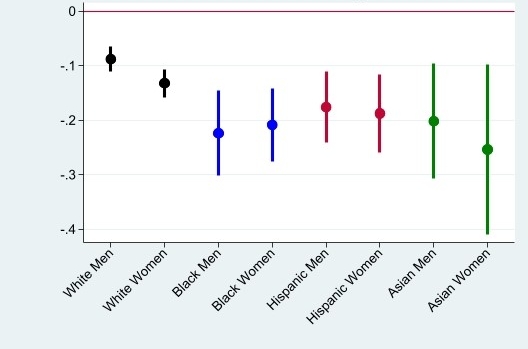 As hypothesized, gaps in justice perceptions were larger for those who faced other discrimination, had less power, or were more isolated. The LGBT-heterosexual difference was 50 percent larger for white women than for white men, and gaps were twice as large for Black, Latino, and Asian men and women as for white men.

The gap was 50 percent larger for employees with disabilities than for those without (Figure 2). Bisexual men perceived even less organizational justice than gay men. We could not analyze transgender employees separately, but their perceptions were probably even worse (Figure 3). 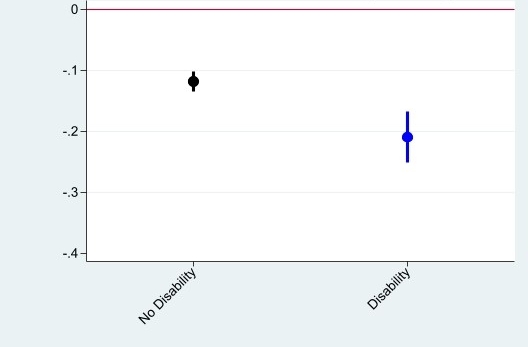 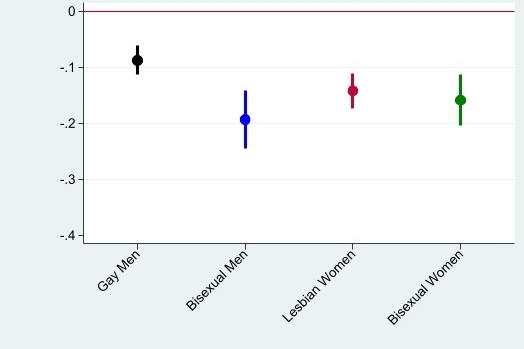 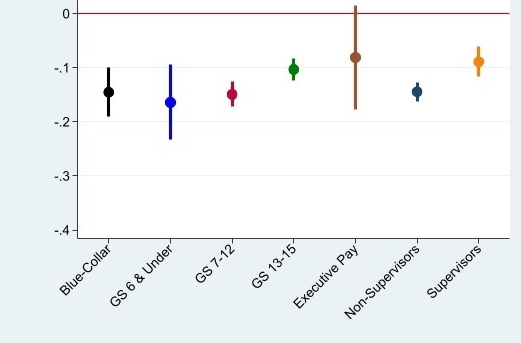 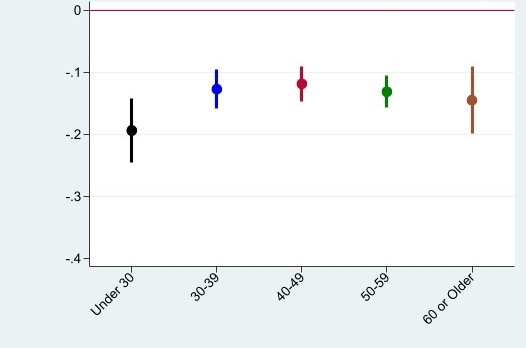 Although the federal service no longer practices explicit anti-LGBT discrimination, it is not yet a model employer of LGBTs, especially LGBTs of color and LGBTs with disabilities. In line with intersectionality theory, LGBT status has a compounding effect on perceived unfair treatment. Not only do LGBTs with a second stigmatized identity see less justice than both gay white men and heterosexuals of their second identity; the additional impact of being LGBT on their sense of injustice is even bigger than it is for gay white men. Diversity and inclusion efforts in the federal service must address the compounding effects of membership in multiple marginalized minorities.

Gregory B. Lewis – Georgia State University
Gregory B. Lewis is professor of Public Management and Policy at Georgia State University. He primarily teaches quantitative research methods in the master’s and doctoral programs. Lewis focuses his research on the impact of individual characteristics on career patterns in the public service and on diversity issues more broadly. He examines how race/ethnicity, gender, sexual orientation, disability status, veterans’ preference, citizenship, and college major affect access to, status in, and satisfaction with federal and state government workplaces.

Blake Emidy – University of Montana
Blake Emidy is Assistant Professor at the University of Montana. His research looks at the organizational factors that contribute to employee motivation and well-being in the public sector, including the effects of budget cuts and downsizing. He also examines differences in employee perceptions of organizational justice at the intersection of gender, race, and sexual orientation.