Russia’s invasion of Ukraine has seen large-scale warfare return to Europe for the first time in nearly 80 years. With many in the West concerned about the conflict escalating towards a confrontation between two nuclear powers, Lloyd Gruber poses the key questions – and offers some unexpected answers.

War has returned to Europe. This is big news, terrifying news. But before we panic–or institute a no-fly zone, or agree to sit down with Mr Putin, or decide never to sit down with him–we need to step back from the events unfolding on the ground.

What more should we be doing?

A no-fly zone? Instituting a no-fly zone, as some commentators have suggested, wouldn’t stop Russia from bombarding Ukrainian cities from the ground, and it would nullify one of the few advantages the Ukrainian forces currently enjoy, their air power. More importantly, a no-fly zone would have NATO forces shooting down Russian jets. If—more like when—Russia then retaliates against a NATO member, this would trigger Article 5, meaning that all NATO members would have to respond. A new Cold War? If only. This would be a new Hot War. And there goes the neighbourhood…

Tighten our economic (and other) sanctions? The question here is whether our sanctions could ever inflict enough damage on the Russian economy to get Putin to back down. They may just embolden him. It’s not like he’s running for re-election (well, not until 2024 at least). If Putin’s people are getting poorer, that’s their problem, not his. It may even help him. Increased prosperity and ‘modernisation’ just raise expectations. Which could quickly turn into frustrations or, yikes, revolutions. What autocrat wants that? The less Putin’s people expect—the lower their aspirations—the better for him. Besides, he’s a multi-billionaire. Putin could lose most his money and still be filthy rich.

Will the West’s reaction to Russia backfire?

Russians are already rallying around their flag. Don’t forget—that’s Putin’s flag they’re hoisting. What happens when the deep-seated antipathy Russia’s standard-bearer has been provoking abroad combines with the fervent support he’s garnering at home? Might this stark juxtaposition prompt him to do something, well, insane? Russia may no longer be a superpower, but it’s not an ordinary power either. Far from it. Let’s make sure our sanctions aren’t self-defeating or, worse, self-annihilating.

Even our words, our tough talk, could be digging us into a hole. That hole looks to me like a nuclear missile silo. It has been a long time since nuclear weapons were a hot topic of conversation. Have we forgotten how to talk—and think—about nuclear deterrence? If we’re not careful, the crisis could escalate fast and far, potentially all the way up to … you-know-what.

As long as Putin is a rational actor, we should be okay on that front. But does President Putin sound rational to you? His decision to invade Ukraine already looks like the height of folly. And what Putin has been saying about his ‘special military operation’ only makes it, and him, look crazier.

Has the war reunited Europe?

Angela Merkel, the recently retired German Chancellor, tried her best to deepen European integration. French President Emmanuel Macron has tried, too, and is still at it. But their efforts never found traction—until now. Has Putin’s unilateral act of aggression just unified Europe? That’s the conclusion reached by European Commission President Ursula von der Leyen, as she stated on Monday. Talk about unintended consequences.

The bigger picture: How will the war affect the West’s relations with China?

If Putin gets his way in Ukraine, will this embolden China to take back Taiwan?America’s (sort-of) security guarantee to Taiwan is stronger than its commitment to Ukraine. Because the two situations are different, China should know better than to extrapolate from one to the other.

It’s even possible that China will be less likely to go for Taiwan now, precisely because the war in Ukraine has unified the West in ways unimaginable even a week ago. (See above.) 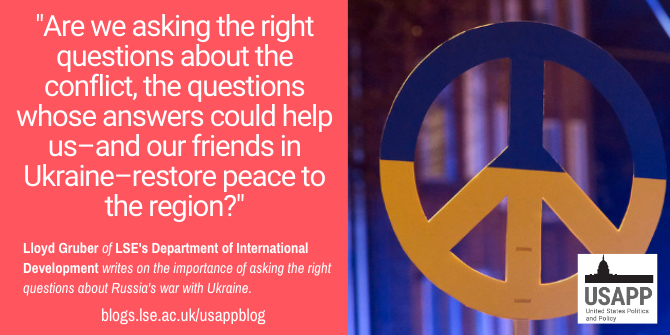 “Every Night for Ukraine 022 Russian Emba” (CC BY 2.0) by rajatonvimma

Putin’s motives and why they matter

Is Putin what International Relations (IR) theorists call a ‘security-seeker’? Just because he’s invaded Ukraine, that doesn’t mean he’ll go after former Soviet Republics like Latvia or Armenia. Ukraine is special. It’s a buffer state. How could we have been so naïve to think Putin would tolerate Ukraine’s accession to NATO or (possibly even worse) the European Union? He had to shut that down, all of it, before it started. From this perspective, the current conflict is Putin’s pre-emptive strike. Is that so crazy? Surely the US would have behaved the same way if—let’s say—Cuba were to get into bed with Russia. No wait, we’ve already been down that road. Been there, done that. If the US can have a sphere of influence, why can’t Russia? Sorry, folks, but it’s a realist world we’re living in. Get used to it.

Or maybe Putin, rather than trying to carve out a zone of security for his people, is really an expansionist. Is there any evidence that Russia has morphed into what IR scholar Charles Glaser terms a ‘greedy state’? If so, this would—and certainly should—change our strategy. Boots on the ground might well make sense in that case.

Perhaps Putin is just misguided. He’s an autocrat, after all. The longer dictators stay in power, the smaller their inner circles get until, by the end, the circles are just points. Putin may still have a few people offering him advice, but the ones who remain—his bodyguards, for example—are suck-ups. Sage advice is not what those people are dispensing. They need to stay in Putin’s good graces, right? Telling the Supreme Leader what he wants to hear is their best strategy. Is it any surprise that Putin thought (mistakenly, as it turned out) that the Ukrainian people would welcome him with open arms? If I were his advisor, that’s what I would have told him. And so would you. That our boss was doing a great job. That everyone loved him. Everyone, everywhere.

That version of the story isn’t as depressing as you might think. If this is what Putin was hearing—if he was simply given bad information and, based on that misinformation, launched his attack—getting him to back down should be fairly easy. Once Putin sees his mistake, he’ll go back home (and find some new advisors).

Is what we’re seeing an elaborate ‘diversionary’ war? That’s my own explanation—or let’s call it a hypothesis—though I don’t hear others making the case. Perhaps this is really just about Putin sowing chaos and, in that way, changing the subject. How can the Russian public focus on their troubles at home when there are even greater troubles abroad? And when it comes to diverting the public’s attention, wars are the bomb. Military conflicts like this turn people into patriots, and good patriots stand behind their leaders, right or wrong—even a dictator as wrong as Putin. The Russian public doesn’t actually need to like Putin. It’s their country they’re supporting. And for now, Putin represents their country. For now, and, most likely, for a long time. To drop Putin in the midst of an existential conflict like we’re seeing—existential not only for Ukraine but also, if it keeps going poorly, for Russia itself, the aggressor—would be too risky.

I hate to be the bearer of bad news, but what start out as diversionary wars can sometimes grow into ‘real’ wars. Security concerns may not have been the initial trigger, but over time, as these conflicts start to get out of control, winning the war becomes a matter of life and death for both sides, the initiator as well as the victim. By this devilish logic, Russia can’t afford to lose this fight. And because its vital security is now at stake, it needs Putin at the helm. It’s Putin or bust.

Or maybe Putin’s Ukrainian campaign is personal. Is it wounded pride that’s driving him? If so, most IR theories‍—the rationalist ones‍—are barking up the wrong tree. Forget Mearsheimer, Walt, and Glaser. It’s Shakespeare‍ we should be consulting here. And Freud, too. The conflict isn’t just personal. It’s neurotic!

What (else) did International Relations theory get wrong?

Is the conflict playing out as IR scholars would expect, or do they need to go back to the drawing board? And while they (or, uh, we) are mulling that one over, maybe we should spend more time trying to understand regime change. That would seem to be a big, if not the big, question here: How can Mr Putin be forced out? Could his cronies do the dirty work for us? Would they even want to? How is this supposed to end?

Finally, did any of this need to happen?

Might the present conflict have been averted as far back as 2002? What if the Prague Summit that NATO held that year had not resulted in a slew of invitations to countries on Russia’s border, welcoming them into a defensive alliance led by the United States? Did the NATO expansion that followed shortly after Prague throw fuel on the fires of Russian nationalism? Did that summit start the fire? Back then, Russian nationalism was on the decline. Today, of course, Russians are rallying behind their hyper-nationalist leader. And as nationalism returns, so are nationalist wars. But it didn’t start today or even this year. The Russian public started rallying some 20 years ago. Do we in the West—in our haste to expand NATO—bear some responsibility for this?

So those are my questions. What are yours?

Lloyd Gruber – LSE International Development
Lloyd Gruber directs the Master of Public Administration (MPA) programme at the LSE’s School of Public Policy. An established expert in international and comparative political economy, he is the author of Ruling the World: Power Politics and the Rise of Supranational Institutions (Princeton 2000) and numerous articles and book chapters on globalization, international governance, and the politics of education in developing countries.