As new technologies continue to displace workers, technological progress also creates new occupations depending on the interplay between humans with machines, causing a skill mismatch. Giuseppe Di Giacomo and Benjamin Lerch discuss how workers are responding to the growing automation of production processes, and why human capital adjustments are crucial for future labour market competition.

Industrial robots are among the leading automation technologies of the last decades. The International Federation of Robotics (IFR) defines them as “automatically controlled, reprogrammable, multipurpose manipulators, programmable in three or more axes”, and estimates that the global stock of robots has increased from 500 thousand to almost three million units between the early 1990s and the late 2010s. So far, robots have been mainly used in the manufacturing sector, as they can be programmed to autonomously perform manual activities (including assembling, material handling, packaging and welding). However, they are increasingly also adopted in other industries, such as the service sector. South Korea and Japan are the major adopting countries with ten and five robots in place per thousand workers, followed by European countries, in particular Germany and Italy, and the United States (see Figure 1). 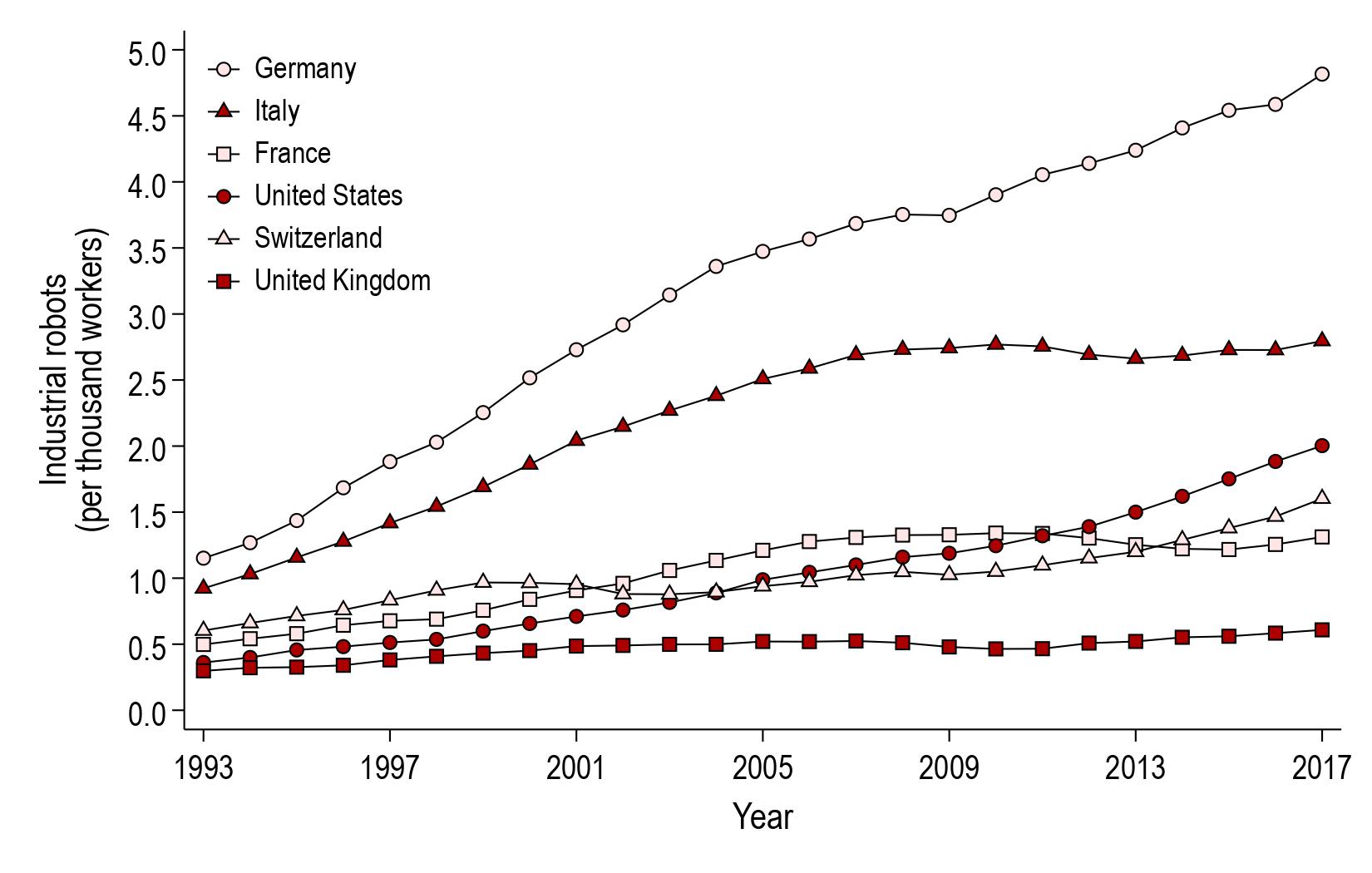 Robots and the labour market

From a theoretical perspective, the use of automation technologies has an ambiguous impact on labour market outcomes. On one hand, robots may replace human workers in a variety of manual tasks, and therefore reduce employment and wages (displacement effect). On the other hand, they may rise the productivity of adopting firms, contributing to the creation of new jobs and activities, and increasing the demand for labour (productivity effect).

Empirical studies have addressed the question of which of these two effects dominates in practical applications finding mixed results across countries. Acemoglu and Restrepo (2020) find that the introduction of industrial robots in the United States between 1993 and 2007 decreased aggregate employment by half a million workers, suggesting that these machines are destroying more jobs than they are creating. This result, however, does not hold among European countries, where robots have displaced low-skill workers from the manufacturing sector but have also increased the demand for labour in the service sector, leaving aggregate employment almost unchanged (Graetz and Michaels, 2018; Dauth et al., 2021).

The role of human capital

When analysing the implications of automation on employment, it is important to emphasize two facts. First, not all workers are exposed to the risk of automation to the same extent. Less educated workers are more likely to be displaced, since they are often employed in manual and routine task-intensive occupations that can be performed (at least partially) by a robot (Di Giacomo and Lerch, 2022). Second, jobs and activities that have been created through technological progress frequently require interaction between humans and machines, and they cannot be performed by displaced low-skill workers due to a lack of the necessary skills (Restrepo, 2015). These skills could be acquired through investment in additional human capital in form of a college degree, as college graduates are often employed in jobs that require cognitive and social skills which are more difficult to automate (Acemoglu and Autor, 2011; Lerch 2022). These findings raise the question of whether advances in automation technologies have contributed to the rising trend in the population with a college degree that is visible in many countries.

In our study, ‘Automation and Human Capital Adjustment: The Effect of Robots on College Enrolment’, we address this question by investigating the effect of firms’ adoption of industrial robots on human capital adjustments of individuals across US local labour markets. We focus on the United States, as its labour markets experienced a significant contraction of employment due to the introduction of robots since the 1990s, while the share of the population with a tertiary education has increased by 50 percent (see Figure 2). The analysis is conducted at the local labour market level, using commuting zones. These are territorial units which correspond to aggregations of adjacent counties characterized by large commuting flows within (but not across) them.

Figure 2 – Population with a college degree 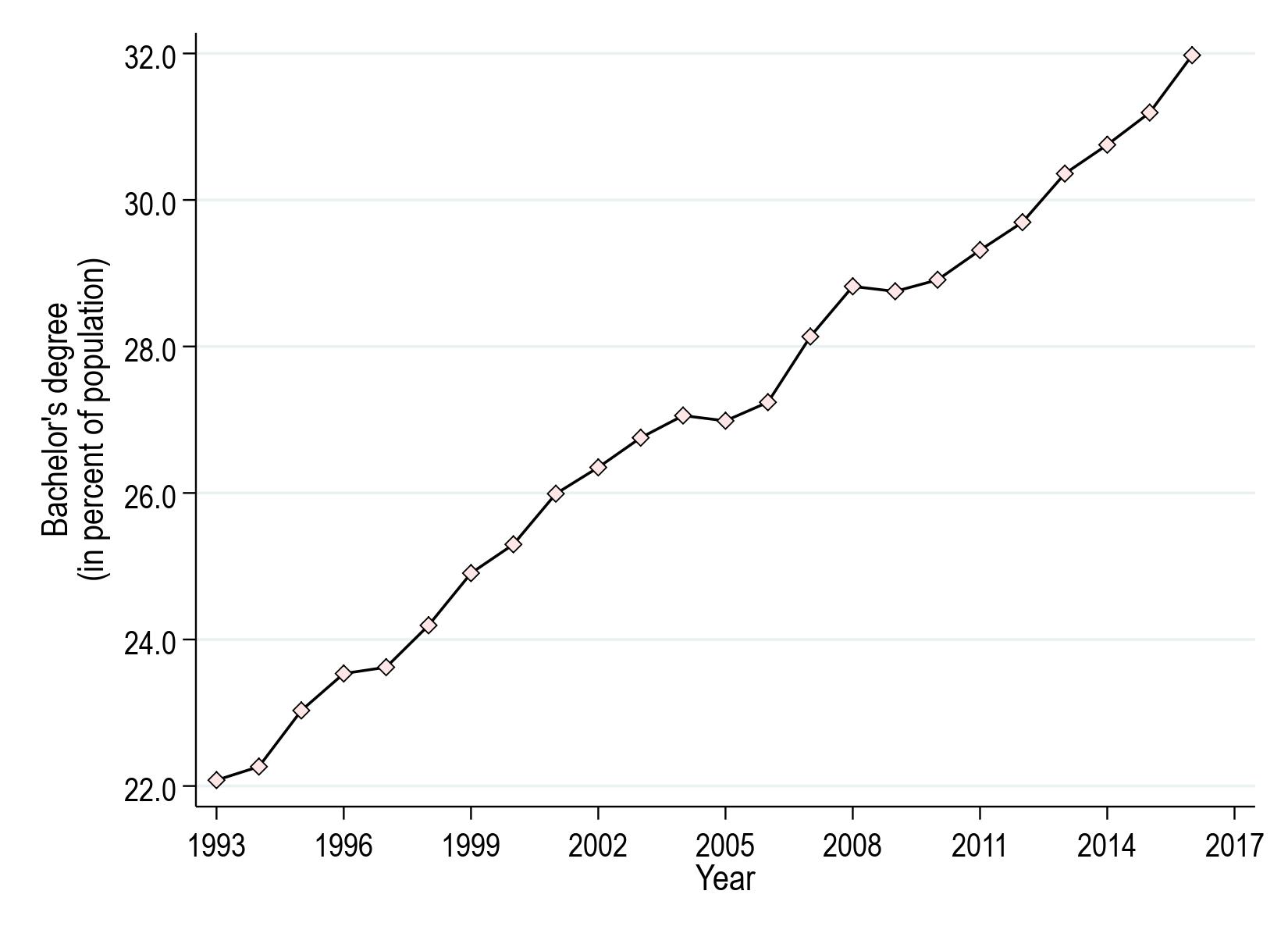 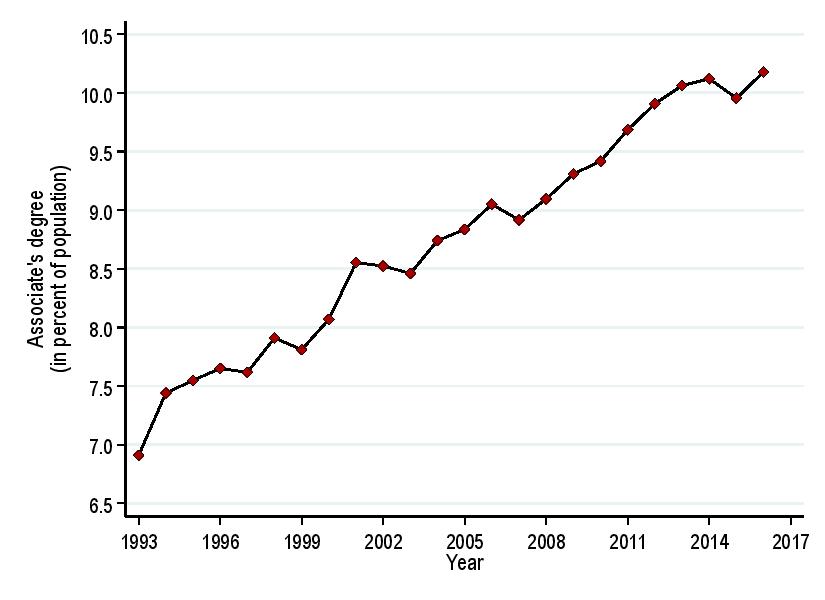 According to our estimates, on average, one additional robot increases college enrolment by about five students. In other words, for every three workers that have been displaced by robots, one individual enrols in college. These students are usually aged between 18 and 35 years and they enrol in community colleges to earn an Associate’s degree with a specialization in applied fields that are complementary to new technologies (including engineering, computer science, but also business and economics). This result suggests that the introduction of 120 thousand new robots in the US economy between 1993 and 2007 has contributed to the increase of the college-educated population by roughly 8.5 percent.

But what drives individuals to adjust their human capital to technological progress? The short answer is that the acquisition of a college degree grants workers access to jobs that are less susceptible to automation. However, there is more, as we find that robot adoption is also increasing wage differentials between college and less educated workers. This is happening because the use of robots induces firms to increase the demand for highly skilled workers who are complementary to new technologies (productivity effect), and it reduces the demand for less educated workers who can easily be substituted by a robot (displacement effect). In line with this finding, even young individuals who are not directly affected by automation on the workplace yet, but who observe the rising wage gap, decide to enrol in college to invest in additional human capital and benefit from higher relative wages.

The adoption of automation technologies is shaping the future of labour markets. Nevertheless, this condition should not fuel concerns about structural technological unemployment in the coming decades, since the introduction of new technologies is also boosting the demand for human labour in new occupations. With about 30 million vacant positions across OECD countries, the demand for labour is higher than ever (The Economist, 2022). Workers may, however, need to adapt their skill set in order to perform these jobs, a process that according to our results has already begun. Moreover, policymakers should facilitate the transition towards future labour markets through investments in skill-specific training programs for the “new” labour force and in retraining the “old” one. The world of work is changing, but this does not mean that we lost our race against the machines.

Benjamin Lerch – Università della Svizzera italiana
Benjamin is a PhD student in Economics at Università della Svizzera italiana, currently visiting Stanford University. He holds a Master in Applied Economic Analysis from the University of Bern and completed successfully the Swiss Program for Beginning Doctoral Students in Economics. He is broadly interested in applied labour economics with a particular focus on the labour market impacts of automation.