Last summer, the US ended its 20-year presence in Afghanistan, withdrawing its remaining troops and the Taliban quickly reasserting control of the country. Muhammad Ali Nasir writes that rather than making a new mistake by imposing sanctions on Afghanistan, the US should instead should offer support and assistance to make the Taliban militarily and economically dependent on it, at a fraction of the cost of its previous military interventions.

The chaotic and embarrassing US withdrawal from Afghanistan last August was heart-breaking for many Americans, particularly for those who lost their loved ones in the longest ever US engagement and for those who had served there and returned with visible and invisible wounds. The monetary cost of the Afghan War is estimated to be over $2.313 trillion and still counting, but the loss of precious lives is beyond any monetary value and immeasurable. Despite all the sacrifices, the war was lost, not due to the lack of resources but because of strategy. While the clock cannot be turned back, there are still ways for the US to change its approach to Afghanistan, reengage with the country and achieve via diplomacy what it could not through military power.

After two decades of fighting in 2020, both US and Taliban came to the table for a peace deal: the Doha Agreement. The US is still the world’s largest economy in nominal terms and military force in real terms. Economic and military might do complement each other, but as instruments of war, they cannot be a substitute for one other, and this was a crucial missing piece of the jigsaw of the US’ Afghanistan strategy. The excessive use of military force from the beginning and a sledgehammer approach was the last thing the US should have done and were contrary to the Art of War: ‘Ultimate excellence lies not in winning every battle, but in defeating the enemy without ever fighting’. Yet, fighting was the only solution which was tried and tried again over the two decades. Had it solely been down to conventional military might, in the graveyard of empires as it’s called, Britain and Russia would have been successful in their ventures in Afghanistan.

For the US, 2001 marked the first on the ground presence in Afghanistan, but it was not its first engagement there. During the Cold War, the US had played a very active role in the Soviet-Afghan War (1979-89), funding the Mujahideen and providing them with stringer missiles that countered Soviet air superiority and eventually led to their defeat. On the US’ part, this was a strategic decision and as the then Secretary of State Hillary Clinton accepted at a 2009 Congressional hearing, it paid back well. But with the fall of the USSR, the US disengaged from the region and that was a major error. It also sanctioned its ally Pakistan under the Pressler Amendment which pushed the country towards China for its defence needs. The restrictions and refusal to deliver F-16s to Pakistan led it to co-develop an indigenous fighter jet JF-17 with China. More recently, the refusal by the US to provide F-35s led Turkey to look for new partners and build its own defence capabilities including TF-X. One of the important lessons which the US needs to learn is that if you refuse to help your allies, they will look for support elsewhere. 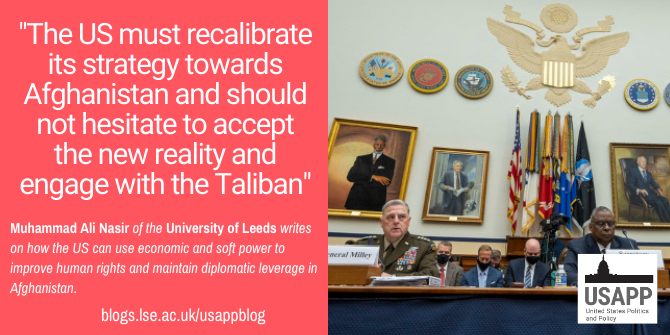 Until the fall of the USSR, the Mujahadeen and the US were on the same page. However, things went wrong with the first Gulf War (1990-91) to liberate Kuwait from Iraqi occupation, which was seen as a US invasion, occupation and interference into Muslim countries and created huge enmity against the west which still prevails. A decade later, the sad event of 9/11 led to the US invasion of Afghanistan and its longest military engagement. This involvement ended with the US withdrawal last summer and the collapse of over 350,000 Afghan National Security Forces overnight. The Taliban have since re-established themselves and now control the whole of Afghanistan. It is important that the US does not repeat its mistake of disengagement from the region. Russia is engaging with the Taliban, while China has been providing aid to Afghanistan. In this scenario, if the US continues sanctions on Afghanistan by freezing its assets of about $9.5 billion, it will be a strategic disaster for two reasons. First, the measures are severely hitting the ordinary Afghan public with the country already facing economic collapse and starvation. Second, it will push the Taliban to find new friends and alliances and there is no doubt, Russia will capitalise on it.

The US must recalibrate its strategy towards Afghanistan and should not hesitate to accept the new reality and engage with the Taliban. It should provide them with support and assistance which can help them tackle IS-K and give the US some diplomatic leverage with which it can urge the Taliban to do more for human and particularly women’s rights. By using its economic muscle, the US can achieve what it could not achieve with military power. It will cost the US only a fraction of what it has been spending over two decades and without any loss of blood. The US has closely allied with many Islamic countries such as Saudi Arabia, with some dependent on the US for their defence needs. It would be advisable for the US to make the Taliban similary militarily and economically dependent. At the same time, the US will then have leverage over Kabul, proportionate to the level of dependency of the Taliban administration.

As it stands, there is no other country that can afford to spend over $2 trillion on a single engagement without a major blow to its economy. It’s the exorbitant privilege and military might of the US that affords it such expensive ventures. But the strategic cost of losing the diplomatic space in Afghanistan is greater and the US must not repeat its mistake by disengaging.