Efforts to tackle the COVID-19 pandemic have not just come from the US federal government – state and local governments have played an important role, too, including by collaborating with non-governmental organizations. Matthew Purcell writes that these partnerships are nothing new: like Partners in Health today, organizations such as the Rockefeller Foundation aided and managed public health campaigns in the US South from 1910 to 1930.

The COVID-19 pandemic has brought health inequalities within the United States to the forefront of public debates. Understandably, federal mandates and fiscal spending have received most of the news coverage – after all, it is public health and, public institutions will have the largest influence. Growing alongside these measures has been the collaboration of local and state governments with non-governmental organizations (NGOs). These patterns are not new. In fact, the history of public health in the US offers examples of similar partnerships that were critical to improving the health and well-being of Americans in the 1920s and 1930s.

Today’s response: Developed in the Global South, now applicable in the States

One of the most prominent NGOs responding to today’s health crisis in the US has been Partners in Health (PIH). Founded in 1987, the organization’s mission statement reflects its desire to link public health with social justice: “to bring the benefits of modern medical science to those most in need of them and to serve as an antidote to despair.” At first, the organization focused on providing care for rural Haitians. Over time, the organization expanded its reach, so that by 2019 PIH provided care to the most vulnerable populations in 11 additional countries.

At the onset of the pandemic, PIH expanded its reach in the US. It partnered with 14 different localities–including the Navajo Nation with whom PIH had a pre-existing relationship. While the scope and details of operations vary at each site, the strategies remain consistent with the ones developed in their work abroad. These strategies include embedding the organization’s employees at the community level, training local staff to build local healthcare capacity, and tailoring aid to the needs of the most vulnerable.

PIH Co-founder Paul Farmer, who passed away in February this year, utilized the liberation theology concept of accompaniment as a basis for its public health strategies. The concept argues that the best way to aid those who are sick and vulnerable is to be willing to live among them. This accompaniment then creates a social relationship between the NGO and the community in need where interventions become more cooperative than top-down. Accompanying the sick in Haiti may involve weekly home visits to a man with HIV or providing transport to a town clinic to a woman suffering from TB. In the US under COVID-19, home visits became connecting community members to local public health departments through track-and-trace services. Transport services connected marginalized populations to state-funded vaccine sites. All these actions help to expand the reach of public health interventions via social relationships, which, for PIH, are built on the principle of accompaniment.

Yesterday’s response: Rockefeller in the US South

In the 1920s and 1930s, Americans faced an altogether different burden of disease than we do, with a number of communicable diseases (including tuberculosis, measles, pertussis) threatening the health of the population. Acts like the Sheppard-Towner Act of 1921 granted federal funding to go towards improving state-run maternal and child health services. New Deal legislation in the 1930s reinforced the federal government’s commitment to improving the health of the US’s mothers and children and expanded its scope to combat general diseases like malaria. The federal government received aid in this endeavor from one of the world’s largest private foundations, the Rockefeller Foundation. 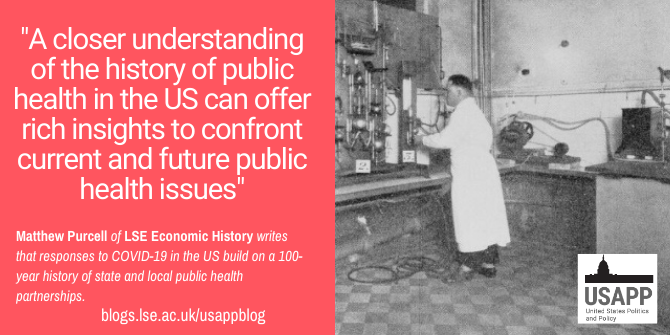 “Methods and problems of medical education / Division of Medical Education, Rockefeller Foundation” from the Wellcome Collection is licensed under CC BY 4.0

Endowed by the fortune accumulated by Standard Oil founder John D. Rockefeller Sr., the foundation’s mission, which remains the same today, is ‘to promote the well-being of humanity throughout the world.’  The foundation’s International Health Division was seen as the antecedent of the World Health Organization due to its breadth and influence.  Before becoming an international philanthropic organisation, the foundation focused on public health issues within the US, particularly in the US South.

From 1910 to 1930, most public health campaigns in the US South were aided, if not completely managed, by Rockefeller scientists and physicians. Eradication campaigns against hookworm and malaria left a large historical footprint. Scholars like Margaret Ellen Humphreys and Hoyt Bleakley have examined the (largely beneficial) effects of these campaigns. Additionally, there is evidence of the foundation’s activity around maternal health. In investigating how the US South improved its maternal health outcomes, I have found linkages between state public health nurses and the Rockefeller Foundation. These relationships resulted in the foundation providing scholarships to the state nurse to attend nurse-midwifery classes at either Lobenstine School of Midwifery in New York City (later this school merged with the Maternity Center Association, a leading institution for maternal health) or Tuskegee School of Midwifery (one of the top Black educational institutions of the day). Upon graduating, nurses would return to their states and train rural midwives in birthing and hygiene best practices. Through these scholarships, the foundation boosted capacity at the local level in a manner that the federal government could not.

The public health strategies implemented to address health challenges in the past are not dissimilar from strategies today. Comparing and contrasting the two eras helps us to define elements essential to successful reforms and to adapt policies to fit new material circumstances and moral views.

Still, despite occurring around a century later, the work of PIH does share similarities with the work of the Rockefeller Foundation. Both organizations worked with local and state health departments. They added expertise and brought new pools of resources to communities, complementing the already large federal responses to the day’s most pressing health issues. A closer understanding of the history of public health in the US can offer rich insights to confront current and future public health issues.

Matthew Purcell – LSE Economic History
Matthew Purcell is a PhD student in LSE’s Department of Economic History. His PhD thesis focuses on the interplay between infant and child health and later life outcomes. Using the US South during the early 20th century, the thesis investigates the effects of major health changes, including public health interventions, medical professional licensing, and urbanisation. He is the recipient of a Phelan US Centre PhD Summer Research Grant for the 2021-22 academic year.