As the November midterm elections approach, polling shows that the Democratic Party may well lose control of the US House and Senate. Bernard Grofman looks at why the Democratic Party – and President Joe Biden – may have fallen out of favor with much of the American public.

In a recent article, Yulia Pechenkina and Helmut Norpoth of SUNY Stony Brook University have captured one essential dilemma for the Democrats, namely steering a course that allows them to simultaneously keep the left energized for the 2022 midterm elections, not alienate minority voters, and also bring back into the fold at least some Trump-Democrats. Such a triangulation may well be impossible, and so Biden might be forgiven for an inability to succeed in this endeavor. Regardless of whether of you are a Democrat or a Republican, it is hard not to see most of Biden’s term as he has tried to steer this course as a series of blunders (with Ukraine policy the key exception, and COVID-19 policy mostly an exception as well).

Did President Biden never see Miss Saigon, with many from South Vietnam trying to board departing US helicopters in its setting of 1975? Did he forget the Hmong and interpreters and embassy staff whowere left behind when the US lost that war? What incompetent and responsibility-avoiding generals gave him the advice that the Afghan Army that we had advised and armed and propped up for so long would not turn tail once the US announced its departure, when virtually anyone who’d served in Afghanistan with the Afghan Army knew better? And let’s not forget how anyone of a certain age can remember how fiercely the South Vietnamese Army just kept on fighting the Viet Cong once the US pulled out.

The failure of Democratic leaders to recognize the costs of letting the progressive left set the Democratic agenda has been considerable. Given the number of folks who are confronted daily with serious crime, the association of the phrase “defund the police” with the Democratic Party (though Biden himself never said it), has undoubtedly damaged the party’s electoral chances. While Biden has supported more police funding it is unlikely that Republican voters will note nor remember this pledge.

For example, emphasizing the fact that states under Republican control have been changing election law to return us to ways of registration and voting from 25 years ago, while missing the subtler changes in reporting and accountability rules for counting ballots that could indeed be apocalyptic if a Republican controlled legislature used trumped up grounds of fraud to undo the outcome of an election legitimately won by a Democrat.

President Biden was repeatedly kicked in the teeth not just by the Republicans (quite predictably), but by Democratic Senators Manchin and Sinema and by the progressive left in his own party. A president who can’t count votes is a president doomed to the worst kind of defeats, namely public ones. As the well-known adage goes, “It is far better to deliver on promises that you haven’t made than to fail to deliver on promises that you have made.” Lowering initial expectations is a key to being perceived as successful, whether in the business world or in politics.

President Biden continued to promise that the deal with the two Senators (Sinema and Manchin) would go through and that we should just be patient, and that yes, we can pass a spending bill that will basically do everything the left wants. The story of Biden’s impotence within his own party on the spending bill is not only the second most embarrassing story of his presidency (the botched Afghanistan withdrawal is first) but it is far and away the longest running, with Biden himself making sure that it kept getting airtime, and airtime, and airtime, and airtime for close to a whole year. And then he tried to end the story by chiding the recalcitrant Senators for not caving in, i.e., for behaving exactly as they said they would from the get-go. Moreover, just when his nonexistent powers of persuasion were highlighted regarding spending, he made unfounded boasts about passing voting rights reform, again without having the votes to deliver. And now (June 2022) he is further compounding the errors by again making promises to Manchin and Sinema that he is highly unlikely to be able to deliver on.

Biden has reiterated over many months that painful times in the form of high inflation would only be temporary, even as the supposed temporary become the permanent. This kind of “own-goal” largely destroyed whatever credibility Biden and his economic advisers had.

All the focus on Biden’s multi trillion-dollar spending bill was on the number of trillions it would spend, instead of on the various good things that the money was going for, many of which had strong bipartisan support, while burying the fact that the money being spent did not amount to even a trillion in any single year, since it was a ten-year spending commitment. Moreover, there are liberals, not just conservatives, who thought that the inflation risks of this spending were high and were unhappy with what looked (or at least was made to look) like blank check spending and the potential for lots and lots of pork. And many voters understand that not all government policies make good use of taxpayer funds. Indeed, we are now reading up all kinds of corruption in the distribution of COVID-stimulus checks and programs. And Biden went for broke, opting against proposing more focused bills in the House for policies that had very wide public support and would gain Democratic approval and then running against the “Do-Nothing” Republicans who had stymied the public will.

Even though it is very likely true that the United States and its allies would not go all out to punish a “minor incursion” by Russia into Ukraine, having President Biden say that raised the ire of the Ukrainians and undoubtedly emboldened Russian President Vladimir Putin while at the same time embarrassing the long thought to be gaffe-prone Biden. Then to call for getting rid of Putin and having to backtrack that he was just expressing moral outrage, made President Biden look inept and as if he didn’t even know his own mind.

The growth in the Latino and Hispanic population is not going save the Democratic Party, since it’s long been obvious that, as this group own homes and move into the middle class, their behavior (unlike that of Africa-Americans) begins to shift in a more conservative direction. Moreover, policies, such as “defund the police,” have helped persuade some poorer Latino and Hispanic voters living in neighborhoods with high crime rates that voting Democratic ought to not really be a life-long commitment. And as nearly half of Latinos are Catholic, relying on an end to Roe v. Wade to spark outrage and boost Democratic chances. is a two-edged sword when it comes to that group’s votes. The continuing erosion of Latino and Hispanic support for the Democrats in the polls visible since the 2020 election (and perhaps even earlier) is the probable death knell in the 2022 elections for a party that was already on life-support.

Note: This article gives the views of the author, and do not represent the views of his university or of any funding agency nor are they the position of USAPP – American Politics and Policy, nor the London School of Economics.

Posted In: Bernard Grofman | Elections and party politics across the US 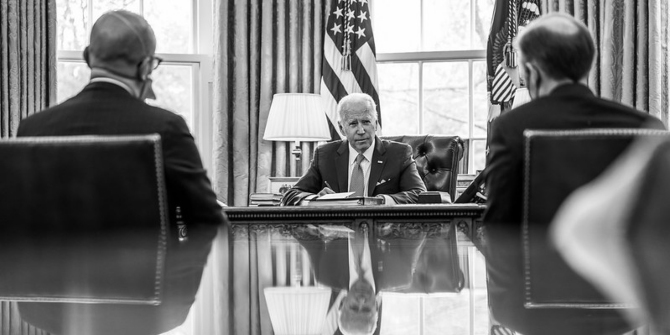 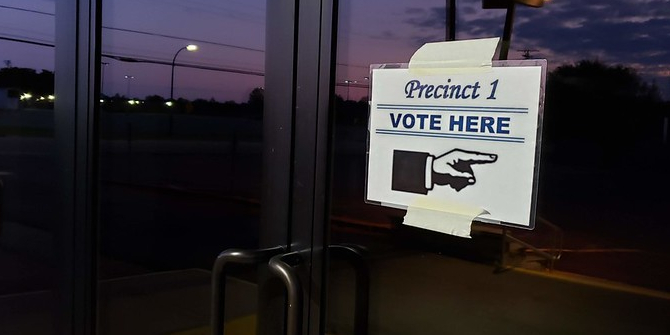