Misperceptions are much harder to correct in people who know less than they think they do about politics.

Misperceptions are much harder to correct in people who know less than they think they do about politics.

The rise of political misinformation has become an important topic, as it can influence electoral outcomes. But correcting misinformation is complicated and often difficult. In new research, Ian G. Anson examines the link between people’s confidence and their own political beliefs and the ability to correct them. He finds that the more overconfident someone is about what they believe, the more likely they are to resist correction with accurate information.

In our current era of political polarization and distrust, misinformation has become a topic of critical public concern. Even former president Barack Obama has recently taken on the issue, decrying the spread of online falsehoods in public appearances and in media. Obama’s remarks echo the research of many scholars, who have argued that polarization, elite cues, and tech industry practices can all cause political falsehoods to proliferate. Once people believe misperceptions, changing their minds can be notoriously difficult.

In my new research, I investigate one possible reason why misinformation is pernicious: Many people are overconfident in their knowledge of politics. When people think they know more about politics than they really do, they ignore their peers’ efforts to help them see the truth. Overconfident people remain convinced of their misperceptions—even when presented with evidence that those false beliefs are deeply unpopular.

Why overconfidence makes us vulnerable to falsehoods

Epistemic confidence is an innate belief in our own abilities. It can serve an important role in helping us navigate the world around us. Without belief in our own competency, we can become too easily swayed by peers, leading to bad decisions that fail to serve our interests. But overconfidence poses other problems. It causes us to ignore well-meaning advice from those around us, leading us to repeat our hard-headed mistakes over and over.

This resistance to correction relates to the “double bind of incompetence” proposed by the Dunning-Kruger Effect. Dunning-Kruger holds that people who perform poorly at a task often lack the ability to understand that they are unskilled. While the original Dunning-Kruger study is currently under academic scrutiny (the finding might be a statistical artifact), educational research has reliably shown that overconfident students are especially resistant to correction.

We might expect a similar pattern in the real world. Most people don’t rigorously scrutinize the information they come across online. Inevitably, some of what they learn is untrue. When informed of their mistakes by trusted peers, most people quickly correct themselves. But overconfident people believe they are much better than their peers at learning about politics. They are likely to spurn their peers’ interpretations of reality, clinging to misperceptions even in the face of strong disproving evidence.

Testing the influence of overconfidence on corrections against misinformation

To see if overconfidence really dampens the effects of corrections against misinformation, I conducted two large-scale survey studies. In 2019 I recruited a sample of 1,021 Americans through the Amazon MTurk platform, and in 2021 I reached a sample of 1,209 respondents through Lucid that was representative of the US population on basic demographics. 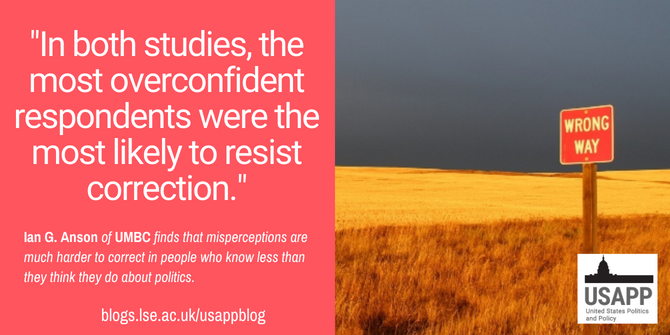 Photo by Tasha Lyn on Unsplash

In both studies, I first asked respondents to take a five-question quiz about politics. The quiz, which had been validated in one of my previous studies, asked basic factual questions about American political institutions, the two major parties, and political issues. Next, I asked the survey-takers to rate how they thought they performed on the quiz. Together, the quiz scores and the self-evaluations helped me to determine which respondents were overconfident about their knowledge of politics.

In the 2019 study, I next provided a random subset of survey-takers with a “corrective cue.” The cue included information about a (fictional) sample of 1,000 other survey respondents. It showed that between 80 and 95 percent of respondents agreed that five factually incorrect statements were, in fact, incorrect. For most people, the “wisdom of the crowds” afforded by this cue should be enough to boost skepticism towards their misinformed beliefs.

In the 2021 study, I provided an even more explicit, preregistered, experimental test of the study’s assumptions. I experimentally manipulated respondents’ confidence, by randomly exposing some of them to a condition in which they learned about their own performance on the quiz they took. Then I exposed them to the corrective cue from the 2019 study. This “reality check” condition succeeded in humbling many overconfident respondents. But did it subsequently make them more willing to correct their misperceptions?

In both studies, the most overconfident respondents were the most likely to resist correction. In the 2019 study, even when controlling for a host of demographic characteristics (including formal education, political knowledge, partisanship, and attentiveness), overconfident people were still less responsive to the corrective cues than others. In Figure 1, I show the effects of the corrective cue on skepticism towards five common political misperceptions, among the overconfident and among those with accurate self-appraisals.

Figure 1 shows that among people with a healthy degree of humility, the corrective cues work: Skepticism towards the misperceptions increases to a statistically significant degree (more than 5 percentage points in most cases) relative to a control condition. However, across all five misperceptions targeted in the study, overconfident individuals did not react meaningfully to the cue. Their skepticism towards the false statements did not change to a statistically significant degree, and in most cases the shifts were negative.

The 2021 study next showed what happens when overconfident people are brought down to earth. Compared to a control condition, overconfident respondents who received the “reality check” treatment – where they learned about their own performance on the quiz – suddenly became much more receptive to the corrective cue. While overconfident people in the control condition were once again resistant to the cue (they once again increased their skepticism by only around 0.1 percent), the “reality check” condition yielded a statistically significant 4.4 percent increase in skepticism. Together, the studies provide observational and experimental evidence that epistemic overconfidence makes correcting misperceptions much more difficult than otherwise.

Misperceptions and overconfidence in a polarized society

While my findings give us much to think about, we must remember that overconfidence is just one trait among many. Partisanship, ideology, and political interest all play a role in determining how we navigate our kaleidoscopic online information environment. While my research shows that overconfidence affects partisans, ideologues, and political independents alike, there is currently much more work to be done to understand how our self-regard shapes our relationship with the truth.

Ian G. Anson – UMBC
Ian G. Anson is an associate professor in the Department of Political Science at UMBC. Ian’s recent publications focus on partisan misperceptions, media and politics, and the scholarship of teaching and learning.