In Palm Oil: The Grease of Empire, Max Haiven tells the story of palm oil, showing how its ubiquity is intertwined with global histories of imperialist and capitalist expansion. In challenging readers to ‘unforget’ palm oil’s entanglements with exploitation, this book foregrounds the importance of class analysis and struggle in the palm oil industry if we are to identify prospects for collective emancipation, writes Audi Ali.

On 7 September 1981, the Malaysia state-owned investment company, Permodalan Nasional Berhad (PNB), orchestrated a rapid purchase of shares of British-owned palm oil conglomerate, Guthrie Corporation Limited, owning a majority stake by midday. This ‘backdoor nationalisation’ was motivated by the desire to ‘wrestle back control’ of plantations that were then still owned by foreign investors – a legacy of British colonial rule and a prerequisite of the independence granted in 1957. The Indonesians were less coy: President Sukarno nationalised former Dutch businesses in 1958. After Suharto’s coup, palm oil and rubber plantations received generous fund injections from the World Bank in the hope of trickle-down development. Taking control of commodity production was seen as central to these respective nationalist projects to usher in revenue and emancipation.

It is now well-documented that the palm oil industry is problematic. Its environmental impact is tremendous: its 27 million hectares of land contribute to massive deforestation and the clearing of peatlands accounts for 6 per cent of global carbon emissions. In Southeast Asia where the months usually alternate between sunshine and monsoon rains, there is an emergence of a ‘third season’ of haze in recent decades caused by land clearing, direly limiting visibility and impairing health. The palm oil industry additionally depends on exploitable labour, while smallholders are subject to increasing control of access to the global market by large palm oil conglomerations working in concert with the state, eager to extract revenue in the name of national development. Who benefits? The story is more complicated than narratives of nationalist victories.

Max Haiven’s Palm Oil: The Grease of Empire tells the story of palm oil and draws out the implications of its evolution from being a cultural and trade product of the Edo Kingdom to a symbol of ‘capitalist, imperial modernity’ serving the needs of the British Empire to an export of postcolonial governments eager to assert their sovereignty in global commodity chains. Haiven recounts this evolution to foreground the exploitation in the industry and to contribute to its unforgetting. Palm Oil recasts this exploitation as ‘sacrifices’ – drawing on Ruth Wilson Gilmore’s characterisation of how certain groups are made more disposable through the prison system – made in pursuit of palm oil’s ‘profound cheapness’ that has led to its ubiquity. It is this ubiquity that prompts Haiven to ask the question that animates the book: what does it mean to be a human so enmeshed in palm oil production?

Most of the palm oil in the market is now known as ‘refined, bleached and deodorised’ (RBD) palm oil. It is extracted from the African palm tree, Elaieis guineensis, which produces oil that is known for its deep red colour as well as its distinctive scent and flavour. These traits are deeply ingrained in the cultural memories of West Africans, a source of pride and filial nostalgia. The RBD variant emerged out of longstanding efforts to efface any of palm oil’s observable character to facilitate its various usages: in a range of products from candles to soap, inks to instant noodles, margarine to industry lubricants and, of course, cooking oil. That the RBD variant is so featureless probably contributed significantly to our collective ‘forgetting’ – a form of commodity fetishism – of cheap palm oil as being sourced through exploitation.

Palm Oil explores how commodity fetishism was and is at play in the palm oil industry. Cheap palm oil-based candles were marketed to British working-class consumers as an ethical choice to wean West Africa from the slave trade. In the case of palm oil soaps sold by William Lever (founder of the company that later merged to become Unilever), they were marketed as a way of taking care of personal hygiene, with cleanliness and filth associated with skin complexion.

These mystifications served to facilitate capitalist and imperial expansion. Lever went on to establish palm oil plantations in Congo which displaced smallholders, and the 1897 British Punitive Expedition against the Edo Kingdom was partly motivated by the need to control palm production to be more ‘efficient’. Palm Oil weaves these accounts together to portray how the commodity fetishism of palm oil directed global racial hierarchies to serve imperial, capitalist expansion and obscured labour exploitation and land expropriation in the colonies in the construction of ‘ethical consumers’ in the metropole.

This obfuscation continues in the contemporary world, the difference being that its main architects are now postcolonial states and regional business elites. As the price of rubber plummeted in the 1970s, Malaysia and Indonesia turned to palm oil as a vehicle for industrialising the agricultural sector and one of the main planks for their developmental agenda. A land development agency in Malaysia, FELDA, recruited the peasantry and organised them into planned smallholdings that fed fruit bunches into state-owned mills and refineries. This project quickly encountered the problem of land shortage which was temporarily fixed with the acquisition of Guthrie Corporation Limited. In Indonesia, similar smallholding programmes were initiated but at somewhat less coordinated and intense levels, until 2006 when the country exceeded Malaysia as the top producer of palm oil. Underlying the development agenda in both countries is the proletarianisation of smallholders and Indigenous communities, alienated from their land and losing their means of subsistence.

Palm Oil’s notions of ‘forgetting’ and ‘sacrifices’ are compelling ways of framing the socio-cultural construction of cheap labour. The drive to develop capitalist enterprises is for the sake of development agendas which have fuelled the expropriation of lands, either by the state or private companies. The book picks out a few notable instances of ‘forgetting’: customary land rights are disregarded by the state in favour of palm oil corporations, forcing whole communities into waged work; lands that were forcibly acquired in the past could sometimes be certified as ‘sustainable’. The workers are in turn sacrificed at the ‘altar of accumulation’ for the sake of producing cheap palm oil, their labour devalued and their lives subject to the persistent surveillance and monitoring techniques deployed on the plantations.

However, like various development projects of postcolonial nations, the palm oil industry has an ambivalent legacy. While it certainly depends on exploitation and expropriation, the development of palm oil production has yielded notable improvements in the lives of the subaltern in terms of income and provided avenues for employment where none better was available. As Palm Oil notes, it is not that subaltern dissent did not occur, but it was stifled by repression and, crucially, by narrowing the possibility that another life without palm oil is possible. FELDA, for instance, was noted for its lavish expenditure in the resettlement of smallholding families; the incomes of these smallholders were also notably higher than the rest of the peasantry. The industry continues to provide revenue that the Indonesian and Malaysian states could tap to fund other developmental goals. The dilemma that it is perhaps better to be exploited than to be starving in the capitalist order is something that is not adequately captured by Haiven. Rather than an unequivocal ‘curse’, palm oil’s cheapness may also represent the subaltern’s desperate wish.

This very short book is not meant to be read as a comprehensive account of the history of palm oil. Instead, it is more of a vignette of its travels across time, space and bodies, which I think yields a convincing portrait of palm oil’s impact. Haiven perhaps intends the book as an impressionistic account of class struggle that is imbricated in core-periphery relations and the hegemonic articulation of the development agenda that systematically favours capital. Palm Oil’s chapters are phrased as questions – ‘Whose fat?’, ‘Whose surplus?’, ‘Whose story?’ – meant to dispel the mystique and to foreground the social relations that permit the production of cheap palm oil. These questions are attempts at grasping ways of being ‘alchemically different’ kinds of humans who could act in solidarity with each other in ways that go beyond Eurocentric consumer advocacy.

Industry watchers have observed how equity ownership of palm oil conglomerates have ‘regionalised’, with Singaporean, Malaysian and Indonesian capital possessing interlocking shares in a dizzying array of companies. Labour, too, in a way, has regionalised with the pool of exploitable labour being sourced more consistently from dispossessed communities in Sumatera and Kalimantan and toiling in plantations across national borders. Palm Oil emphatically points out that it makes sense to foreground class analysis and struggle in the palm oil industry if we are to identify prospects for collective emancipation.

Audi Ali – LSE
Audi Ali is a candidate for MSc. in Political Sociology at the London School of Economics and Political Science and recipient of a Chevening scholarship from Malaysia. His current research focus is on the intersection between state theory and class analysis in the palm oil industry. 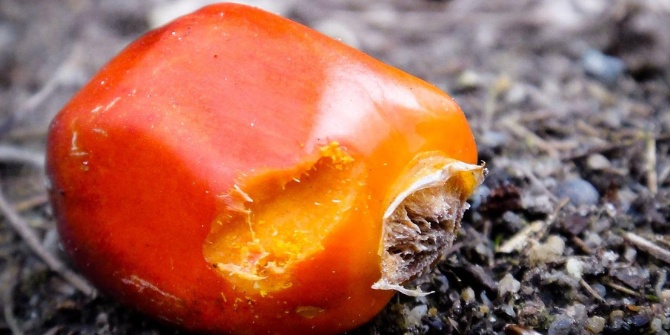