Prosecutors have the power to practically address some of the problems facing the American judicial system. Belén Lowrey-Kinberg, Rachel Bowman, and Jon Gould argue that screening cases with an on-call prosecutor before an arrest takes place can save counties money, prevent innocent people from spending time in jail, and allow resources to be devoted more efficiently in other areas of policing. Through a broader implementation of pre-arrest screening practices, police departments can work towards building a justice system that is more racially and socially fair.

The American criminal justice system has many problems: case backlogs, extreme levels of spending by cities and counties without a corresponding reduction in crime, and stark racial disparities. Prosecutors have the power to address some of these issues. Case screening – deciding which cases brought by police merit prosecution, and which cases do not – is an important tool. Many prosecutors’ offices engage in this process after an individual is arrested and jailed. If prosecutors were to screen cases before an officer makes an arrest, they could avoid many of the problems that afflict the American criminal justice system.

In most jurisdictions, an officer decides to arrest a suspect, who is then detained and jailed. Only later do prosecutors review the case to decide whether to pursue charges. This process can take place anywhere from hours to weeks after the initial arrest, with a defendant languishing in jail in the interim. In stark contrast to this approach, some jurisdictions employ a pre-arrest screening system, in which officers are required to confer with an on-call prosecutor before a felony arrest without a warrant can take place. The prosecutor hears the facts and decides whether, and upon what charges, the officer can arrest the suspect. Crucially, the officer cannot arrest the suspect if the prosecutor declines to charge.

Assessing the impact of pre-arrest screening

As part of a larger project examining prosecutorial decision-making, we examined one year of case processing data from Franklin County (a pseudonym to protect the identity of the office), where the District Attorney’s office employs a pre-arrest screening system for warrantless felony arrests. We used these data to assess the impact of pre-arrest screening as a policy. In the process, we answer several related questions, among them: how often do prosecutors decline to charge cases brought to them by law enforcement? Why do they decline these cases? And what type defendants and cases do prosecutors usually decline to charge? The answers to these questions illuminated several significant benefits of pre-arrest screening.

Over one year, Franklin County prosecutors declined to charge 17.5 percent of all felony cases presented by law enforcement. This amounted to about 750 cases. Shockingly, almost half of declined cases (42 percent) were attributed to insufficient evidence, 20 percent were attributed a determination that no crime had been committed, and 20 percent required further investigation before charges could be filed. Although these were the three most documented reasons, other factors such as uncooperative (four percent) or unreliable (six percent) victims were not unusual. In six percent of cases, prosecutors determined that an alternate resolution, such as an anger management program, was a more appropriate solution than criminal charges.

The ability for prosecutors to decline cases before arrest when necessary has significant benefits for both citizens and the criminal justice system. For instance, a single day of jail for one defendant can cost almost $129. Through a 17.5 percent decline in arrests, Franklin County likely saved a minimum of $100,000 in jail costs in one year alone, while keeping potentially innocent citizens out of jail. Weeding out these weak cases also reduces the workload of public defenders, who are notoriously overworked and underpaid. Importantly, these are cases that would have eventually been declined anyway; they were just caught and declined early in this instance thanks to Franklin County’s pre-arrest screening system. 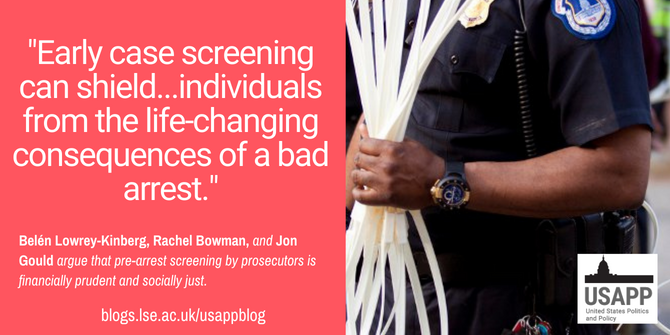 Prosecutors, like other criminal justice practitioners, have limited time and funding. By removing weak cases before an arrest even takes place, prosecutors can devote their limited resources to pursuing cases that merit their attention. Pre-arrest screening was well-liked by the prosecutors we spoke with. In fact, one of the prosecutors we interviewed had previously worked in a jurisdiction with pre-arrest screening and viewed it as the best system to forestall weak cases from being prosecuted.

Prosecutors in Franklin County were more likely to decline the cases of Black (vs. White) suspects based on weak evidence. This suggests that, when the suspect is Black, police may be more likely to favor an arrest despite weak evidence than when the suspect is White. Thanks to Franklin County’s pre-arrest screening system, cases with insufficient evidence were caught early, and Black defendants were not immediately arrested. This suggests that pre-arrest screening is one avenue for reducing racial disparities in the criminal justice system.

A host of other benefits occur alongside pre-arrest screening. Prosecutors we interviewed shared that law enforcement departments, especially those with high turnover, often misapplied the law, or were overly eager to bring charges on cases that could not be proven. A pre-arrest screening system provides both officers and prosecutors with a natural pause to assess the quality of the evidence. Compiling a database of declined cases that identifies the reasons why the on-call prosecutor declined the case may even be useful as a training tool for law enforcement.

Of course, the benefits of pre-arrest screening also extend to citizens. For a suspect, avoiding jail can mean the difference between keeping and losing employment and housing. Early case screening can shield these individuals from the life-changing consequences of a bad arrest.

Fixing the criminal justice system requires a comprehensive evaluation of its component parts, beginning with the arrest decision. Our research into pre-arrest screening shows that it is well-received by prosecutors and has many benefits — from financial to social. It is a practical solution to many problems plaguing American criminal justice.