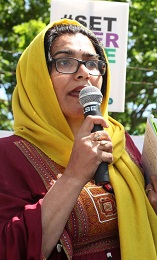 Rahela Sidiqi is chair of the London Refugee Women’s Forum, right to Information Advisor for South Asian Countries and serves as a Trustee at Women for Refugee Women.  She is the founder of Asian Middle East Women and Youth Society (AMEWYS) and Farkhunda Trust. She has strong experience in building solidarity to advocate and fight against social injustice. Previously, Rahela spent 5 years as Senior Advisor to Civil Service Commission in Afghanistan, and worked at leadership level with non-governmental organisations for 15 years. She has a masters degree in Social Development and Sustainable Livelihood from Reading University.

She is also a poet and storywriter.

What is one reading, film, artwork you would recommend to others interested in supporting action to achieve gender equality?

My advocacy didn’t arise from reading books, but from the incredibly difficult environment of my country, Afghanistan, where early and forced marriage is common and where women find it difficult to access education. When you stand back and observe your own society and find those invisible constraints that hold women back, it becomes hard not to support action to achieve gender equality.

I believe that female performance in the arts, mainly poetry and theatre, can be a great catapult to achieving gender equality, especially in a context like Afghanistan. My experience has been that when women are asked to role-play, to recite poetry, to publicly read the verses, they are given the space to examine their surroundings, express their feelings and even develop difficult but important solutions.

What are the top cases from around the world – global, regional and/or national – that you believe have been paramount to tackling violence against women?

Rather than talk about specific court cases, I’d like to highlight instances of cooperation that I believe have been key to either tackling violence against women or setting a precedent that recognises the rights of women and facilitates progress.

On a regional level, the South Asian Association for Regional Cooperation (SAARC) in 1986 hosted a technical committee on gender in development. The committee highlighted issues of women’s role in development and established indicators for promoting women’s participation in the socio-political and economic arenas.

On a national level, the Elimination of Violence Against Women Law in Afghanistan was critical as it was the first of its kind in the history of the country. While there is great difficulty in implementing the law, it provides a legal framework to protect women and sets an important precedent in the country. For me, the most critical parts of the law are: the elimination of child marriage, the criminalisation of violence against women and the right for women to divorce and to be heard in the courtroom. Having said this, implementation of the law has been poor and incredibly frustrating, with most incidents of violence against women going unreported. Many of these issues arise from the fact that the law was issued by presidential decree and not through parliament.

On a global level, the 1995 Fourth World Conference Women and the Beijing Declaration and Platform for Action brought a revolution in terms of increasing women’s participation in the socio-economic and political system. “When we empower women and girls, we will realise a better future for all” (Ban Ki-Moon).

Coming to an unfamiliar land and entering the refugee life in 2012 was extremely difficult and disheartening. The people who really inspired me at this time were Natasha Walter, the director of Women for Refugee Women, and Eve Ensler, the founder of V-Day and One Billion Rising.

When I first came to London, I got involved with Women for Refugee Women where I met Natasha Walter. With just four part-time staff members, they do an incredible amount of work and provide a community to those who have fled terrible suffering and violence in their homeland and alienation and depression in their host countries. For me, Natasha and the organisation provided a kind of therapy where I could use my skills, experience and knowledge to continue to support women who have suffered from violence and where I could seek to bring justice to the world.

Eve Ensler inspired me with her sheer determination and commitment to bettering the lives of women who have faced violence. She set up one of the biggest mass action to end violence against women in human history, One Billion Rising. Eve was also critical to the launch and work of my own organisation, the Farkhunda Trust. When I first talked to her about setting up the charity after the horrific death of Farkhunda Malikzada, Eve encouraged this ambition and trusted in my capacity to move the organization forward. V-Day provided the seed funding needed to launch the Farkhunda Trust and send five young exceptional women to pursue their higher education in Afghanistan.

People like Natasha and Eve inspire me because of their courage, their trust and their values, and their sheer dedication to making change.

During the civil war and Taliban years, I worked with woman at the grassroots level, setting up community forums across the country with UN Habitat.  One evening in 2000, I was returning from a work trip in Bamyan when I saw that many of the houses of the women from the community forum were burnt and destroyed, having been targeted by the Taliban. Thrown into a stage of depression, I began writing and sharing poetry in order to make sense of these terrible events; this helped keep me focused and committed to continuing my work and activism.

After the fall of the Taliban and when the transitional government came to power in 2002/3, there were 57 community forums and these women, who had done their work in hiding for fear of further violence, came out like birds from the cave, and they were flying. They were golden resources to the new system of governance and were now working in charities, NGOs, and the government. They knew management, they had knowledge of community building, administrative work and had computer skills. This would be the most memorable moment for me, to see that my work during the war had benefitted women and youth.

Second, identify the invisible constraints preventing gender equality. My philosophy is that the visible is visible. You have to find the implicit, less visible problems within any given context and in all environments, including the home, work, education and the market. Once you identify the underlying issues, both individually and collectively, you can holistically approach the problem.

What do you believe are the biggest challenges to achieving gender equality today?

The lack of education, knowledge, and skills in less developed countries, and the lack of belief in the capacity of women more generally among a range of actors in positions of power at national and international levels.  For example, despite emphasis on women’s rights, international development actors do not adequately engage local women and leave them marginal to processes of development, reform and change, especially in fragile and conflict-affected environments.

There are so many incredible organisations doing important work across the globe, both at the grass-roots level and globally. As noted before, I admire the work of Eve Ensler and One Billion Rising. Based on the statistic that 1 in 3 women (equaling roughly one billion people) on the planet will be beaten or raped during her lifetime, each year people come together to express their outrage, strike, dance, and rise in defiance of the injustices women suffer, demanding an end to violence against women.

Want more on Rahela Sidiqi’s work? Read her interview with One Billion Rising. You can also read Farkhunda Trust’s latest report online or follow their work on facebook and twitter.