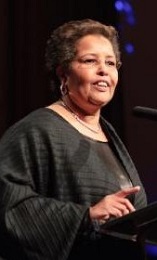 Faiza Jama Mohamed is Africa Regional Director of Equality Now. She has more than 20 years of experience working with international organisations and has been instrumental in building several women’s organisations with a focus on promoting peace, gender equality and advocacy for women’s rights. Prior to her current position, Faiza was an active member of the women’s movement in Somalia. In 1998, she received the Hundred Heroines Award in recognition of her activism in support of the human rights of Somali women. In 2008, she was awarded the Hunger Project’s Africa Prize for Leadership for Sustainable End of Hunger. Faiza serves on numerous committees and boards dealing with women’s rights issues and closely supports the work of the African Union Commission.

Her mantra: “Always be optimistic! Obstacles or challenges are temporary and they can be overcome with determination and persistent effort!”

What is one reading, film, artwork you would recommend to others interested in supporting action to achieve gender equality?

Equality Now’s report on rape laws, “The World’s Shame – The Global Rape Epidemic” which will be out soon. It is an analysis of surveys on laws on rape and sexual assault from 82 jurisdictions and shows how laws around the world are failing to protect women and girls from sexual violence.

What do you think has been the most important legal case addressing violence against women?

[Editor’s note. Maria Da Penha Maia Fernandes v. Brazil (2001) is a case concerning women’s rights to: equal protection under the law without discrimination, a fair trial, justice and judicial protection – as well as state obligation to prevent, punish and eradicate violence against women. In this case, the Inter-American Commission on human rights determined that in order for laws to protect women from violence, they must be effectively implemented.]

My parents were (and still are) my great role models. From them I got the confidence and determination to enjoy my rights fully.

The many women and girls that I encountered in life have also influenced me to take up the kind of work I do. Every day I strive to make the world better and more just for women and girls so they may enjoy their rights, especially in Africa.

I have many memorable moments.

Empowering girls is critical. Once they know their rights they are fearless and seek support. All those courageous girls are role models for other girls who come across similar injustices. Experience also shows us that collective and coordinated action is important for us all to tackle the multi-faceted challenges confronting women and girls, and which reduce them to a vulnerable group.

The battle to end gender-based violence and discrimination against women and girls is far from over. We have certainly made some gains securing binding treaties such as the Protocol to the African Charter on Human and Peoples’ Rights on the Rights of Women in Africa; and won cases brought before national courts or at regional level (e.g. Equality Now vs. Ethiopia), etc. but more needs to be done. Our experience shows that sustained advocacy and consistently holding states accountable while at the same time offering them needed guidance and technical support are crucial in securing political will and investment in gender equality. The Sustainable Development Goals (SDGs) of the 2030 Agenda for Sustainable Development is an excellent opportunity for all of us to take advantage of in promoting gender equality. Governments have recognised that gender equality and development and linked. Hence, all stakeholders need to work together to successfully realise the set targets under the SDGs.

Lack of political will at different levels compounded with the patriarchal structure that continues to undermine gender equality. Additionally, the long time it takes for courts to conclude on cases is harmful to many women.

There are many organisations that are doing amazing work and under very difficult conditions. Those that stand out for me are: