International Convention for the Protection of All Persons from Enforced Disappearance

International Convention for the Protection of All Persons from Enforced Disappearance May 4th, 2016 Richard 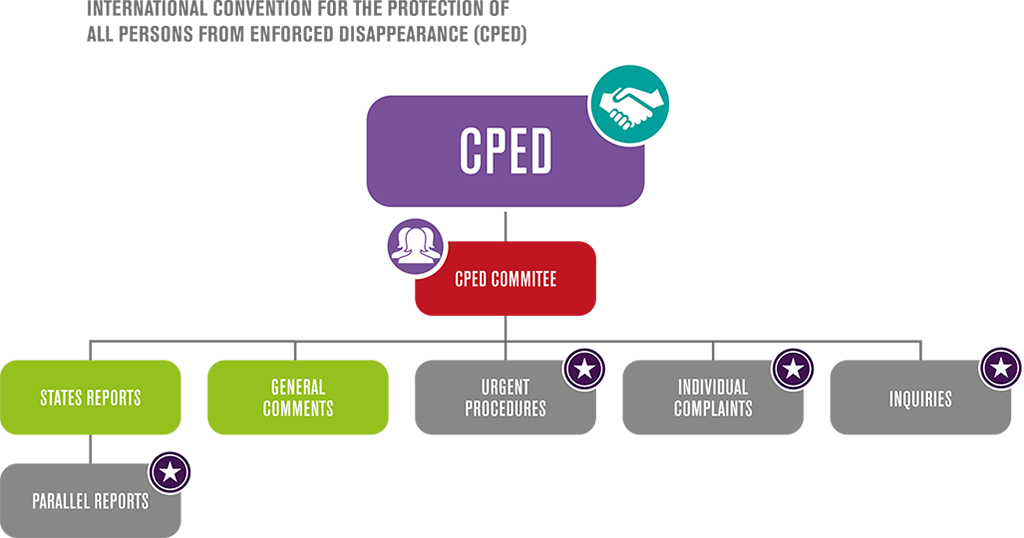 Treaty: International Convention for the Protection of All Persons from Enforced Disappearance (CPED)

States must report: Within two years of ratifying, then as requested by committee

Has your state ratified it? CPED

…considered to be the arrest, detention, abduction or any other form of deprivation of liberty by agents of the State or by persons or groups of persons acting with the authorisation, support or acquiescence of the State, followed by a refusal to acknowledge the deprivation of liberty or by concealment of the fate or whereabouts of the disappeared person, which place such a person outside the protection of the law.

According to a 2015 report by the International Center for Transitional Justice and UN Women, enforced disappearance has an enduring impact on women. While women make up a minority of the disappeared, they are the majority of those who suffer in the aftermath of the act – facing social, economic and psychological disadvantages within their communities. When women are disappeared, they are likely to suffer the same levels of torture, ill-treatment and abuse as men, however the specific acts often take a gendered form relating to women’s biological functions or roles as mothers. One gendered violation of women’s rights linked to disappearance is that pregnant women who were subjected to enforced disappearance often were detained incommunicado until the birth of their child, then the children were secretly adopted by families who concealed the true identities of these babies.  For these reasons and more, it is recommended that transitional justice mechanisms should adopt a gender-sensitive approach to the investigation, truth-seeking and reparations associated with enforced disappearances.

As of August 2016, the Committee has not yet issued and General Comments.

The Committee has, however, addressed gender-based violence in a number of concluding observations. Specifically, the Committee has asserted that it:

…wishes to emphasize the particularly cruel effect of enforced disappearances on the rights of women and children. Women who are subjected to enforced disappearance are particularly vulnerable to sexual and other forms of gender violence. Women who are relatives of a disappeared person are particularly likely to suffer serious social and economic disadvantages and to be subjected to violence, persecution and reprisals as a result of their efforts to locate their loved ones. Children who are victims of enforced disappearance, either because they themselves were subjected to disappearance or because they suffer the consequences of the disappearance of their relatives, are especially vulnerable to multiple human rights violations, including the loss of their identity. The Committee therefore places special emphasis on the need for the State party to take account of gender perspectives and child-sensitive approaches when upholding the rights and fulfilling the obligations set out in the Convention.

Although the reporting guidelines under CPED do not explicitly require information on violence against women, they do state (emphasis added):

The report should include information on Statistical data on cases … and reports of enforced disappearance disaggregated, inter alia by sex, age, ethnic origin and geographical location.

According to the ‘Adopted views on the relationship of the Committee on Enforced Disappearances with civil society actors’ (para. 6):

Civil society actors… have a key role to play in providing information during  the reporting process, at all stages, including for  the preparation of the list of issues and for  the follow-up to the concluding observations of the Committee.

If the Committee receives reliable information indicating that a State Party is seriously violating the provisions of this Convention, it may, after consultation with the State Party concerned, request one or more of its members to undertake a visit and report back to it without delay.

If the Committee receives information which appears to it to contain well-founded indications that enforced disappearance is being practised on a widespread or systematic basis in the territory under the jurisdiction of a State Party, it may, after seeking from the State Party concerned all relevant information on the situation, urgently bring the matter to the attention of the General Assembly of the United Nations, through the Secretary-General of the United Nations.

Under Article 30 of the Convention, the Committee has competence to receive and consider requests for urgent action submitted by the relatives of a disappeared person or their legal representatives, their counsel or any person authorised by them, as well as by any other person having a legitimate interest, that seek to ensure that the state party take, as a matter of urgency, all necessary measures to seek and find a disappeared person.

Interested in submitting a request for urgent action to the Committee?