International Convention on the Elimination of All Forms of Racial Discrimination

International Convention on the Elimination of All Forms of Racial Discrimination May 4th, 2016 Richard 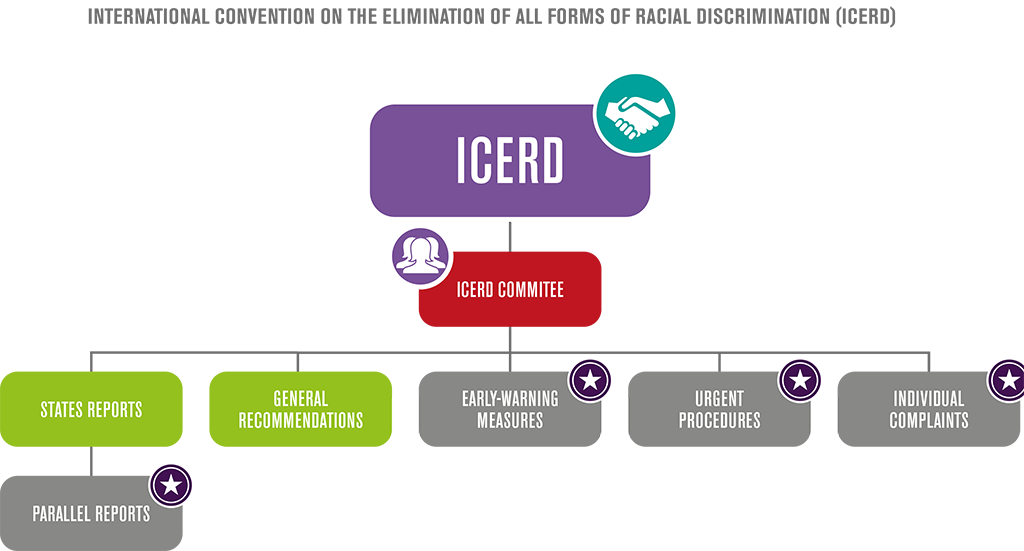 Treaty: International Convention on the Elimination of All Forms of Racial Discrimination (ICERD)

Treaty Body: Committee on the Elimination of Racial Discrimination (CERD)

Reports to: General Assembly, through Secretary-General

States must report: Within one year of ratification, and every two years afterwards, and when requested by the Committee.

Has your state ratified it? ICERD

The International Convention on the Elimination of All Forms of Racial Discrimination (ICERD) was adopted by the United Nations General Assembly (Resolution 2016) on 21 December 1965. It is an international treaty dedicated to tackling all forms of racial discrimination, outlining the rights of racial and/or ethnic groups or individuals that need to be guaranteed if everyone is to have equal enjoyment of their human rights and fundamental freedoms.

Committee on the Elimination of Racial Discrimination (CERD)

In its General Recommendations, the Committee has addressed gender-based violence in relation to specific provisions in the ICERD and state responsibility to end it.

General Recommendation 31: on the prevention of racial discrimination in the administration and functioning of the criminal justice system 20 August 2004

Determined to combat all forms of discrimination in the administration and functioning of the criminal justice system which may be suffered, in all countries of the world, by persons belonging to racial or ethnic groups, in particular non-citizens – including immigrants, refugees, asylum-seekers and stateless persons – Roma/Gypsies, indigenous peoples, displaced populations, persons discriminated against because of their descent, as well as other vulnerable groups which are particularly exposed to exclusion, marginalization and non-integration in society, paying particular attention to the situation of women and children belonging to the aforementioned groups, who are susceptible to multiple discrimination because of their race and because of their sex or their age; the Committee formulated the following recommendations…
…
41. Lastly, with regard to women and children belonging to the groups referred to in the last paragraph of the preamble, States parties should pay the greatest attention possible with a view to ensuring that such persons benefit from the special regime to which they are entitled in relation to the execution of sentences, bearing in mind the particular difficulties faced by mothers of families and women belonging to certain communities, particularly indigenous communities.

General Recommendation 27: on discrimination against the Roma 16 August 2000

6. [Regarding general measures, States should] take into account, in all programmes and projects planned and implemented and in all measures adopted, the situation of Roma women, who are often victims of double discrimination.
…
22. To ensure that their programmes, projects and campaigns in the field of education take into account the disadvantaged situation of Roma girls and women.
…
34. To initiate and implement programmes and projects in the field of health for Roma, mainly women and children, having in mind their disadvantaged situation due to extreme poverty and low level of education, as well as to cultural differences; to involve Roma associations and communities and their representatives, mainly women, in designing and implementing health programmes and projects concerning Roma groups.

2. Certain forms of racial discrimination may be directed towards women specifically because of their gender, such as sexual violence committed against women members of particular racial or ethnic groups in detention or during armed conflict; the coerced sterilization of indigenous women; abuse of women workers in the informal sector or domestic workers employed abroad by their employers. Racial discrimination may have consequences that affect primarily or only women, such as pregnancy resulting from racial bias motivated rape; in some societies women victims of such rape may also be ostracized. Women may also be further hindered by a lack of access to remedies and complaint mechanisms for racial discrimination because of gender related impediments, such as gender bias in the legal system and discrimination against women in private spheres of life.

According to the Guidelines for the CERD-specific document, 13 June 2008:

6. On women, bearing in mind general recommendation No. 25 (2000) on gender-related dimensions of racial discrimination. States parties are requested to describe, as far as possible in quantitative and qualitative terms, factors affecting and difficulties experienced in ensuring the equal enjoyment by women, free from racial discrimination, of rights under the Convention. They should provide data by race, colour, descent and national or ethnic origin, which are then disaggregated by gender within those groups.

Want more? Read the full guidelines on states reporting on the OHCHR website

‘Racial discrimination and sexual violence against women of color, including those identifying as LGBTQ, and the impact of inadequate racial justice initiatives and violence prevention policy implementation in the United States’

Because states parties to ICERD are required to report on the gender-related dimensions of racial discrimination (including VAW), CSOs may also include information on VAW in their parallel reports to CERD. This gives CSOs an opportunity to respond to any gaps in states report and call attention to specific aspects of VAW that remain inadequately addressed.

In this first parallel report submitted by Black Women’s Blueprint, the organisation was able to draw CERD’s attention to specific United States’ laws and federal initiatives which “inadequately or do not address racial discrimination and gender-based violence against women of colour.” Following the submission of this report (in combination with other parallel reports submitted by NGOs/CSOs), CERD issued concluding observations on 25 September 2014 that identified ‘Violence against women’ as a key area of concern:

19. While acknowledging the measures taken by the State party to reduce the prevalence of violence against women, the Committee remains concerned at the disproportionate number of women from racial and ethnic minorities, particularly African American women, immigrant women and American Indian and Alaska Native women, who continue to be subjected to violence, including rape and sexual violence.”

The Committee calls upon the State party to intensify its efforts to prevent and combat violence against women, particularly American Indian and Alaska Native women, and ensure that all cases of violence against women are effectively investigated, perpetrators are prosecuted and sanctioned, and victims are provided with appropriate remedies. It also urges the State party to take measures to guarantee, in law and in practice, the right to access justice and effective remedies for all indigenous women who are victims of violence. It also reiterates its previous recommendation that the State party provide sufficient resources for violence prevention and service programmes; provide specific training for those working within the criminal justice system, including police officers, lawyers, prosecutors, judges and medical personnel; and undertake awareness-raising campaigns on the mechanisms and procedures available to seek remedies for violence against women.

In order to submit an individual complaint, the state party concerned must have recognised the competency of the Committee according to Article 14 of the ICERD.

Early Warning Measures can be taken by the Committee to prevent existing problems from escalating into conflicts. These can also include confidence-building measures to identify and support any action that improves the livelihood of the concerned group and prevents a resurgence of conflict where it has previously occurred.

Guidelines (at the bottom of the page)

Urgent Action Procedures allow the Committee to respond to problems requiring immediate attention to prevent or limit the scale or number of serious violations of the ICERD.

Guidelines (at the bottom of the page)

For more information on engaging with the UN treaty bodies, see ‘Working with the United Nations Programme: A Handbook for Civil Society‘