International Convention on the Protection of the Rights of All Migrant Workers and Members of Their Families May 4th, 2016 Richard 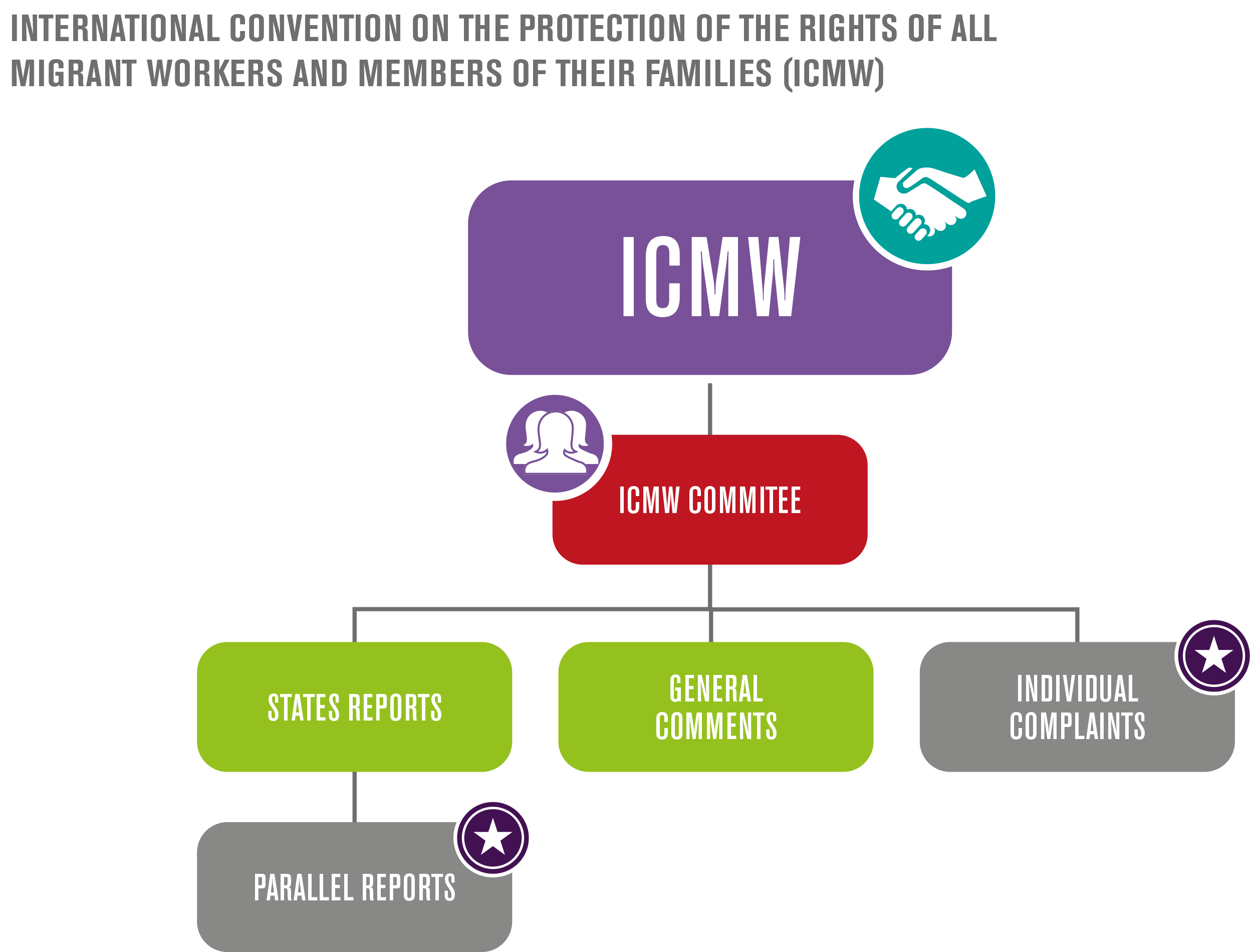 Treaty: International Convention on the Protection of the Rights of All Migrant Workers and Members of Their Families (ICMW)

Treaty Body: Committee on the Protection of the Rights of All Migrant Workers and Members of Their Families (CMW)

States must report: Within one year of ratification, and every 5 years. Committee may request more frequent reports if they have specific concerns.

Has your State ratified it? ICMW

Women migrant workers predominate a number of job sectors, many of which lack formal economic protections. Due to the invisible and unregulated nature of these jobs women are at an increased risk of experiencing violence. According to the Committee on the Elimination of All Forms of Violence against Women, General Recommendation No. 26, 5 December 2008:

The unique vulnerabilities women migrant workers’ face are a concern of the Committee on the Protection of the Rights of All Migrant Workers and Members of Their Family and States are required to combat these vulnerabilities under the ICMW.

In its General Comments, the Committee has addressed gender-based violence in relation to specific provisions in the ICMW and state responsibility to eliminate it.

60. As noted by the Committee on the Elimination of All Forms of Discrimination against Women, the position of female migrants is different from that of male migrants with regard to, inter alia, the migration channels used, the sectors of the labour market where they are employed, the forms of abuse they suffer and the consequences and impact thereof. Recognizing that most domestic workers are women and girls and taking into consideration traditional roles, the gendered labour market, the universal prevalence of gender-based violence and the worldwide feminization of poverty and labour migration, States should incorporate a gender perspective in efforts to understand their specific problems and develop remedies to the gender-based discrimination that they face throughout the migration process.

General comment No. 2: On the rights of migrant workers in an irregular situation and members of their families 28 August 2013

21. Migrant workers in an irregular situation, particularly women, are at increased risk of ill-treatment and other forms of violence at the hands of both private actors, including employers, and State officials which includes sexual violence, beatings, threats, psychological abuse, and denial of access to medical care, for example. Under article 16, paragraph 2, States parties have an obligation to protect all migrant workers and members of their families against violence, physical injury, threats and intimidation, whether by public officials or by private individuals, groups or institutions. This obligation requires States parties to:

According to the CMW General Reporting Guideline:

In this part of the periodic report, the State party should provide updated information related to the current reporting period in accordance with the following categories; if there is nothing new to report under a category, it should be so stated:
…
* Legislation and practice providing for mechanisms to monitor the situation of migrant women, including those employed as domestic workers, and safeguards and guarantees to protect them from exploitation and violence;
* Procedures assisting victims of trafficking, especially women and children…

Want more? Read the full text of the reporting guidelines on the OHCHR website

Note: As of 8 August 2016, the individual complaints procedure for the Committee has not yet entered into force.

Individual complaints concerning VAW are often submitted to the Committee on the Elimination of all forms of Discrimination against Women, however cases involving multiple levels of discrimination can be submitted to other treaty bodies.

Interested in submitting an individual complaint to the Committee in the future?