Convention on the Rights of Persons with Disabilities

Convention on the Rights of Persons with Disabilities May 4th, 2016 Richard 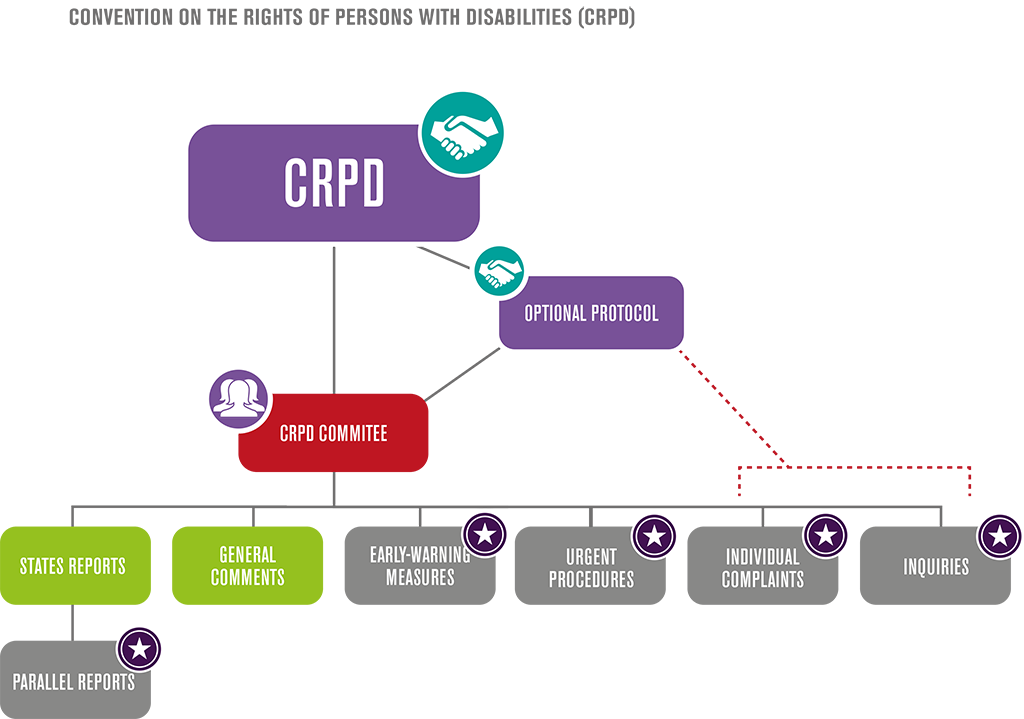 Treaty: Convention on the Rights of Persons with Disabilities (CRPD)

Optional Protocol(s): Convention on the Rights of Persons with Disabilities (OP-CRPD)

Treaty Body: Committee on the Rights of Persons with Disabilities (CRPD)

Reports to: General Assembly and ECOSOC

States must report: Within two years of ratification, and every four years afterwards, and when requested by the Committee

Has your state ratified it? CRPD

Convention on the Rights of Persons with Disabilities (CRPD)

The CRPD was drafted “…recognizing that women and girls with disabilities are often at greater risk, both within and outside the home, of violence, injury or abuse, neglect or negligent treatment, maltreatment or exploitation”. Although most of the articles within the CRPD will help tackle VAW for women with disabilities, there are articles directly addressing this issue. Article 6 of the CRPD specifically refers the multiple level of discrimination women with disabilities are subject to.Article 16 requires that “States Parties shall put in place effective legislation and policies, including women- and child-focused legislation and policies, to ensure that instances of exploitation, violence and abuse against persons with disabilities are identified, investigated and, where appropriate, prosecuted.”

The Optional Protocol to the Convention on the Rights of Persons with Disabilities was adopted by the United Nations General Assembly (Resolution 61/106) on 13 December 2006. It establishes an individual complaints procedure for bringing alleged violations of the CRPD by states parties before the CRPD treaty body. It also establishes an inquiry procedure to investigate the status of persons with disabilities in a specific country, should the treaty body receive evidence of grave and systematic violations of the Convention rights are taking place.

Committee on the Rights of Persons with Disabilities

The Committee on the Rights of Persons with Disabilities (the “Committee”) is the independent expert body appointed to oversee states parties’ implementation of the CRPD. It consists of 18 independent experts who are nationals of states parties to CRPD. Each is elected by secret ballot and serve four-year terms. CRPD meets twice annually.

In its first General Comment, the Committee has addressed gender-based violence in relation to specific provisions in the CRPD and state responsibility to eliminate it.

General comment No. 1: on Article 12: Equal recognition before the law 2014

35. Article 15 of the Convention on the Elimination of All Forms of Discrimination against Women provides for women’s legal capacity on an equal basis with men, thereby acknowledging that recognition of legal capacity is integral to equal recognition before the law: “States parties shall accord to women, in civil matters, a legal capacity identical to that of men and the same opportunities to exercise that capacity. In particular, they shall give women equal rights to conclude contracts and to administer property and shall treat them equally in all stages of procedure in courts and tribunals” (para. 2). This provision applies to all women, including women with disabilities. The Convention on the Rights of Persons with Disabilities recognizes that women with disabilities may be subject to multiple and intersectional forms of discrimination based on gender and disability. For example, women with disabilities are subjected to high rates of forced sterilization, and are often denied control of their reproductive health and decision-making, the assumption being that they are not capable of consenting to sex. Certain jurisdictions also have higher rates of imposing substitute decision-makers on women than on men. Therefore, it is particularly important to reaffirm that the legal capacity of women with disabilities should be recognized on an equal basis with others.

CRPD has also recently taken submissions from interested parties while drafting General Comment No. 3 (forthcoming) on Women with Disabilities (Article 6). Information on the current draft, and the various submissions from CSOs and other parties.

According to the General Reporting Guidelines for CRPD:

Under Article 16 – Freedom from exploitation, violence and abuse

…paying special attention to children and women with disabilities… States Parties should report on:

States should report on… Measures taken to protect all persons with disabilities from forced sterilization, and girls and women from forced abortions

Under Article 6 – Women with disabilities

Although gender aspects should be mainstreamed in each of the articles where applicable, under this specific article the report should include information regarding measures taken by the State Party to ensure the full development, advancement and empowerment of women, for the purpose of guaranteeing them the exercise and enjoyment of the Convention rights and fundamental freedoms, and the elimination of all forms of discrimination.

…Affirmative-action measures taken towards the inclusion of the most vulnerable groups among persons with disability, such as women, children, etc. …

On Sweden’s compliance with CRPD

Because States Parties to CRDP are required to report on the gender-related discrimination against persons with disabilities (including VAW), CSOs may also include information on VAW in their parallel reports to CRPD. This gives CSOs an opportunity to respond to any gaps in states report and call attention to specific aspects of VAW that remain inadequately addressed.

In 2011 the Forum for Women and Disability submitted their report Women with Disabilities and our lives in Sweden 2011, to the Committee, in parallel to Sweden’s official state report in.

In it they raise the issue of the difficulties experienced by Women with Disabilities of escaping domestic violence, due to lack of accessible shelters:

Swedish women’s shelters are run by civil society organizations and far from all Swedish municipalities have a shelter in place. Because of need for protection, the locations a women’s shelter can be placed are limited while it is simultaneously important that the rent for the facilities is low. Due to this situation, many shelters are not accessible for women with disabilities. Swedish municipalities have not been willing to grant resources for necessary accommodations to be made for women’s shelters.

Following the CSO’s submissions, and the State’s own report, the Committee issued Concluding Observations, stating, in relation to the right to “Freedom from exploitation, violence and abuse (art. 16)”:

41.The Committee is concerned at reports showing the level of violence to which women with disabilities are being exposed, and at the low percentage of shelters accessible to persons with disabilities.

42. The Committee recommends that the State party ensure that violence and abuse against girls , boys and women with disabilities are identified ; that necessary support is available; and that the issue is addressed in national training courses for personnel working in health and medical care, schools, the police force and the judiciary.

Individual complaints concerning VAW are often submitted to the Committee on the Elimination of all forms of Discrimination against Women, however cases involving multiple levels of discrimination can be submitted to other treaty bodies.

For example, in the current draft of the Committee’s General Comment on Women with Disabilities, it acknowledges that:

Violence against women and girls with disabilities encompasses “violence accomplished by physical force, legal compulsion, economic coercion, intimidation, psychological manipulation, deception, and misinformation, and in which absence of free and informed consent is a key analytical component”. Women with disabilities face a confluence of violence which reflects both gender and sex-based and disability-based violence. It may be interpersonal violence or institutional and structural violence. Interpersonal violence includes such forms of abuse as economic, psychological, sexual, emotional, physical and verbal threats and actions. Institutional and structural violence is any form of structural inequality or institutional discrimination that maintains a woman in a subordinate position, whether physical or ideological, to other people within her family, household or community. In terms of physical and psychological violence, women and girls with disabilities are victims of exploitation, violence and abuse (CRPD article 16), but are also subject to forms which are aggravated, amounting to cruel, inhuman or degrading treatment (CRPD article 15).

OP-CRPD, unless state party has opted out under Article 8

According to Article 6 of the optional protocol, If CRPD “receives reliable information on serious, grave or systemic violations” by a State Party to the Optional Protocol, it may designate one of its Committee members to “conduct an inquiry and report urgently to the Committee”. This may include a visit to the country.

The Working Methods of the Committee on the Rights of Persons with Disabilities states:

They will also be used to consider issues that may require immediate attention in order to avoid serious violations of the Convention or to reduce the number or degree of such violations.

The Committee or interested parties, including non-governmental organizations (NGOs), may request activation of these procedures. Such requests should be submitted to the Committee in writing, accompanied by supporting evidence or information to justify the request.

Want more? Read the full Working Methods of the CRPD on the OHCHR website

The Working Methods of the Committee on the Rights of Persons with Disabilities states:

They will also be used to consider issues that may require immediate attention in order to avoid serious violations of the Convention or to reduce the number or degree of such violations.

The Committee or interested parties, including non-governmental organizations (NGOs), may request activation of these procedures. Such requests should be submitted to the Committee in writing, accompanied by supporting evidence or information to justify the request.

Want more? Read the full Working Methods of the CRPD on the OHCHR website