As part of a series exploring continuums of violence, David Duriesmith looks at policy responses to men’s violence against women and to (men’s) violent extremism, urging policymakers to see beyond the notion of ‘toxic’ masculinity and the ‘bad man’ and acknowledge structural causes.

Policymakers in a wide range of arenas are coming to terms with the myriad of harms which are caused by ‘toxic’ forms of masculinity. While harmful masculinities are now considered by those responding to mental health, drug and alcohol abuse, and men’s health, the most prominent examples have been attempts at preventing men’s violence. Policy responses to men’s violence have developed in different silos, with distinct sets of tools, understandings and expertise. Recently, the case has been made to break down the silos of policy responses to men’s violence, arguing that due to the interconnected nature of men’s violence there needs to be concerted efforts to transform masculinities.

The argument for a coordinated response relies on the notion that toxic forms of masculinity create a myriad of ills, and responding to each of the symptoms of harmful masculinity is the equivalent of playing whack-a-mole with patriarchy. These moves align closely with the well-established argument from women, peace and security agenda advocates that patriarchal violence exists on a continuum and needs to be addressed in a holistic rather than piecemeal fashion.

A desire to challenge harmful masculinities has resulted in the curious alignment of two policy agendas, preventing violent extremism (PVE) and preventing violence against women (PVAW). These efforts have looked to shift particularly harmful attitudes and practices which were seen to be associated with men’s power and use of violence. Because the policy links between PVE and PVAW are recent and in a state of flux, it is an opportune time to explore the potential pitfalls of linking these two arenas. It is important to ensure that coordinating attempts to transform masculinities don’t reinforce harmful tropes. This is particularly important as both arenas have tended to rely on racist or carceral solutions to violent masculinities.

Policy attempts to transform masculinities have tended to employ a particular stereotyped vision of who is responsible for violence. As Michael Salter has shown “targeting gender norms has proven to be a more palatable method for preventing VAW than addressing structural gender inequality.” This has meant that campaigns focus on presenting those who are violent against women as bad or failed men, then appealing to viewers to adopt an alternative vision of manhood. As Salter explains:

These programmes apply…strong messages about the responsibility of ‘real men’ to prevent VAW…Within a ‘one-dimensional’ framework in which masculinity is a cultural but not structural subject position, those boys and men with the least capacity to transform the determinants of VAW are responsibilised to do so while those who benefit the most from gendered and classed inequalities are rarely the focus of intervention.

Similarly, in response to violent extremism in Australia, we have seen a focus on fixing the failed masculinities of socially marginalised men. As with the early work on PVAW, work from PVE has often worked on developing the profile of a potentially violent man.

The imagination of potential terrorists contained within PVE has been widely dissected as harmful, racist and inaccurate but it remains prevalent. Critical race scholar Yassir Morsi has explored the ways in which imaginations of the radical male Muslim terrorist are deployed to silence radical thought. Drawing directly on Franz Fanon, Morsi argues that Australian responses to violent extremism demand that Muslim men ‘prove’ themselves by partaking in liberal rituals to please a white audience.

Considering Morsi’s critique, there is a distinct risk that aligning PVAW and PVE will exacerbate PVE’s tendency to produce the figuration of failed violent men. An example can be seen in the launch of the Fixated Threat Assessment Centre in Victoria, which focusses on profiling potential terrorists. In response, prominent VE expert Clark Jones commented:

“when you spend time in certain suburbs in Melbourne or Sydney, kids are more likely to be involved in behaviours like drug-taking and domestic violence. Violent extremism may be one of these behaviours, but it’s not the only one.”

This response indicates how PVE relies on an imagination of dangerous men from dangerous places. Jones’ allusion to ‘certain suburbs in Melbourne or Sydney’ has a clear meaning within Australia of poor suburbs with large migrant communities. This response resonates with Salter’s critique of PVAW.

Policy responses in both PVE and PVAW suffer from limited imagination, fixated on a particular figuration of the deviant man as the basis for preventing violence. This does not have the capacity to engage root causes of violence or the tricky work of transforming structures which produce violent masculinities. The desire to coordinate responses to men’s violence is in many ways promising, it responds directly to feminist concerns around the continuum of violence. However, I believe there is a potentially unanticipated risk here, that policy response do not increase their effectiveness, but that they resonate in producing and reproducing similar stories about deviant men.

The alignment of policy arenas working on masculinity transformation has the capacity to amplify the most problematic aspects of existing work without substantially improving prevention. This feedback loop risks treating each iteration of reframing as successful prevention, shifts in discourse which constantly search for better ways to understand the deviant masculinity, without addressing structural causes. This alignment will fail if policy responses continue to treat gender as a personal attribute of problematic individuals, rather than an integral social structure. Such a limited approach results in the transformation of masculinities being reduced to encouraging deviant men to take up the mantle of true manhood.

Despite the risks I have outlined, there remains a need to transform masculinities, because “declaring a policy problem to be ‘intractable’ does not make it go away.” It is essential that pro-feminist scholars and activists pay close attention to how knowledge around masculinities is being deployed in PVE programing while remaining attentive to the failures we have already seen in PVAW.

More in this series:  To address the plight of Yazidi women we must look beyond the notion of wartime ‘sex slaves’, Philippa Greer (LSE WPS Blog, 12 October 2018)

Header image: Memorial for the Lindt Café Siege in Sydney, which prompted conversations in Australia about masculinity and violent extremism. Sardaka (CC 3.0)

David Duriesmith (@DavidDuriesmith) is a postdoctoral fellow at the University of Queensland where he works on masculinities, violence and peacebuilding. More by the author: ‘Engaging men and boys in the Women, Peace and Security agenda: Beyond the ‘good men’ industry’ (LSE WPS Working Paper Series 11/2017).

Posted In: Continuum of Violence 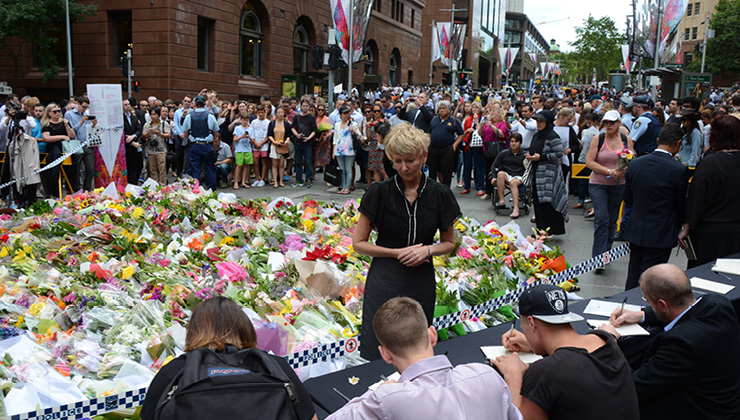