Sexual violence committed against the people of West Papua is being used increasingly by Indonesian security forces as a means of taking land from the indigenous population. Szilvia Csevár and Christine Tremblay from The Hague University of Applied Sciences, look at the enforced militarisation of West Papua and the patterns of sexual violence used as a means to fully control and exploit the islands natural resources.

Located on the Western half of the island of New Guinea, West Papua is a militarised territory, the site of a long-term conflict between Indonesia and indigenous Papuans seeking self-determination. Central to the ongoing conflict is the Grasberg mine, containing the world’s largest reserve of copper and gold and operated by the US mining giant Freeport McMoRan Inc. Over the years, the Indonesian authorities have systematically rejected any claims of the indigenous population on their traditional lands. In the meantime, extracting activities do not only plunder West Papua’s natural resources, resulting in extreme pollution of the environment, they also provide an excuse for the presence of military forces on the territory leaving them free to use sexual violence to terrorise the indigenous population, affecting primarily indigenous women, and forcing communities to leave their lands.

During Dutch colonial rule it was called ‘West New Guinea’ or ‘Netherlands New Guinea’. Demanding integration into Indonesia, Indonesian authorities referred to it as ‘West Irian’. For many years it was the Indonesian province of ‘Irian Jaya’, later split in two and renamed ‘Papua’ and ‘West Papua’ respectively. This article refers to the territory under Indonesian control in its entirety as West Papua.

While the Netherlands accepted Indonesia’s independence set out in the Hague Agreement in 1949, West Papua was exempted from this transfer of authority and the territory remained under Dutch administration. A series of negotiations followed, during which the positions of the two states were discussed within the UN General Assembly on several occasions. While Indonesian representatives insisted on West Papua forming an integral part of Indonesia and thus should be returned to them, the Netherlands maintained its view that Dutch administration in West Papua was pre-requisite to create proper conditions for the self-determination of the people concerned in accordance with Chapter XI of the United Nations Charter as West Papua was by then added to the UN list of non-self-governing territories.

Then Dutch Foreign Minister Luns submitted a draft resolution to the General Assembly calling for a transfer of sovereignty to the people of West Papua, placing the territory under temporary UN administration and allowing a referendum to be carried out determining the political status of the territory. At the time, the then President made clear that Indonesia would not hesitate to resort to “methods which would startle the world if the United Nations did not comply with his Government’s wishes” and the Netherlands was pressed into an agreement designed to prevent Indonesia from siding with the Soviet Union.

Negotiated without any involvement of the West Papuan people, administration of the territory was transferred to Indonesia under the 1962 New York Agreement, with short intermediary control by the UN Temporary Executive Authority (UNTEA). Under Article XVIII of this Agreement, definitive control by Indonesia over West Papua was conditional on an act of self-determination according to international standards thus requiring a referendum based on the principle of ‘one man one vote’.

The Act of Free Choice was conducted in July 1969 with about 10,000 Indonesian troops present on the territory. A ‘one man one vote’ referendum, as required by the New York Agreement and international law on the matter, was firmly rejected by Indonesia, which instead insisted on a ‘consultation’ with 1,022 selected electors, representing a population of 800,000. In his Report to the UN Secretary General, UN Representative Ortiz-Sans concluded that “the [Indonesian] Administration exercised at all times a tight political control over the population.”

By permanently integrating West Papua into its territory, Indonesia has secured full and uncontrolled access to West Papua’s vast concentration of natural resources. The Grasberg mining complex has been operated by PT Freeport since 1967, with extracting activities continuously expanding. Currently guarded by the BRIMOB, a special counter insurgency unit within the Indonesian Police, the mining site was for many years secured by the Indonesian National Armed Forces (TNI). With sources indicating “it is in their interest to create the sort of security that necessitates their presence” – peaceful demonstrations and resistance activities have been met with disproportionate violence and are used to explain their presence – the TNI continues to profit from the Grasberg mine by receiving structural illegal payments from Freeport.

extracting activities do not only plunder West Papua’s natural resources, resulting in extreme pollution of the environment, they also provide an excuse for the presence of military forces on the territory leaving them free to use sexual violence to terrorise the indigenous population

In 2016, Amnesty International reported on excessive violence by Indonesian military and police forces against indigenous Papuans. Freedom House also reported on widespread deadly violence “related to labor disputes and foreign-operated mines and other resource extraction enterprises”. As highlighted by the Minority Rights Group International, a common feature of these confrontations is the involvement of Indonesian security forces. Regular reports of rights abuses in West Papua are published by the International Coalition for Papua.

There is evidence of sexual violence committed against the indigenous population, especially women, despite the scarce sources available due to the Indonesian authorities’ policy of isolating the island. The United Nations Special Rapporteur on Violence Against Women reports that rapes by Indonesian military forces were indiscriminately committed against women in the area of the Grasberg mine. The report also reveals rape used as an instrument of torture by Indonesian army forces, as well as by police forces, when interrogating women on the whereabouts of their husbands who are allegedly affiliated with the OPM (Free Papua movement). Rapes committed by Indonesian Special Forces Command (Kopassus) in a village in the vicinity of the Grasberg mine were also unveiled by the International Centre for International Justice.

Moreover, it has been argued by researchers that violence perpetrated by Indonesian military forces against the Papuan population has become more and more sexualised. Testimonies of men’s penises being cut off and a women’s vagina being cut out and fed to her husband are some of the atrocious examples being avowed.

Sexualised violence is one of the methods employed by Indonesian security forces to incite the indigenous population to flee and abandon their houses and lands. The space is then left to the Indonesian authorities to fully exploit the natural resources of the island of West Papua by granting concessions to foreign investors

These acts of sexual violence illustrate a method used by the Indonesian security forces to terrorise the indigenous population of West Papua, leaving them no choice but to flee (often to the forest) in order to escape acts of violence. The story of NM being arrested, tortured and gang raped as a form of interrogation to discover the whereabouts of her husband suspected to be affiliated with OPM illustrates the use of this method. Following her release, she fled to the forest with her family and hid there for three years. Her story is similar to the stories of many Papuan women who are victims of sexual violence and forced to abandon their homes and land in order to escape the ill-treatments by the Indonesian military forces.

Sexualised violence is one of the methods employed by Indonesian security forces to incite the indigenous population to flee and abandon their houses and lands. The space is then left to the Indonesian authorities to fully exploit the natural resources of the island of West Papua by granting concessions to foreign investors as exemplified by the case of the Grasberg mine. In this context, one may view this method as a form of land grabbing that utilises sexual violence and other human rights violations in order to gain the full control over the land. This control facilitates the protection of the economic interests of the Indonesian authorities on the West Papuan territories.

Since West Papua’s much-contested annexation by Indonesia, Papuans have been violently dispossessed of their traditional lands and natural resources and sexual violence has been employed as a method of land grabbing by the Indonesian authorities. Extractive activities contribute to the environmental destruction of West Papua and largely benefits Indonesian authorities and foreigner companies, while in turn creating a ‘lawless environment’ in which sexual violence is utilised to gain more lands.

This blog is part of the mini-series on Gender, Nature and Peace framing the conversation on women’s rights, climate change, the environment and post-conflict situations, and builds on the first Gender, Nature and Peace workshop, funded by the British Academy small grant and by the AHRC project a Feminist International Law of Peace and Security. The second workshop is due to take place in Colombia.

Szilvia Csevár is a lecturer in Public International Law at The Hague University of Applied Sciences. She will assume a researcher position at the Chair of UN Studies in Peace and Justice of the Leiden University as of September 2019, her research is focusing on indigenous rights in the context of environmental justice. She worked with the UN-backed Special Court for Sierra Leone for several years as a Legal Researcher. Twitter: @SzilviaCsevar

Posted In: Gender Nature and Peace

Environment and war: what the WPS agenda can teach us about invisible crimes August 9th, 2019 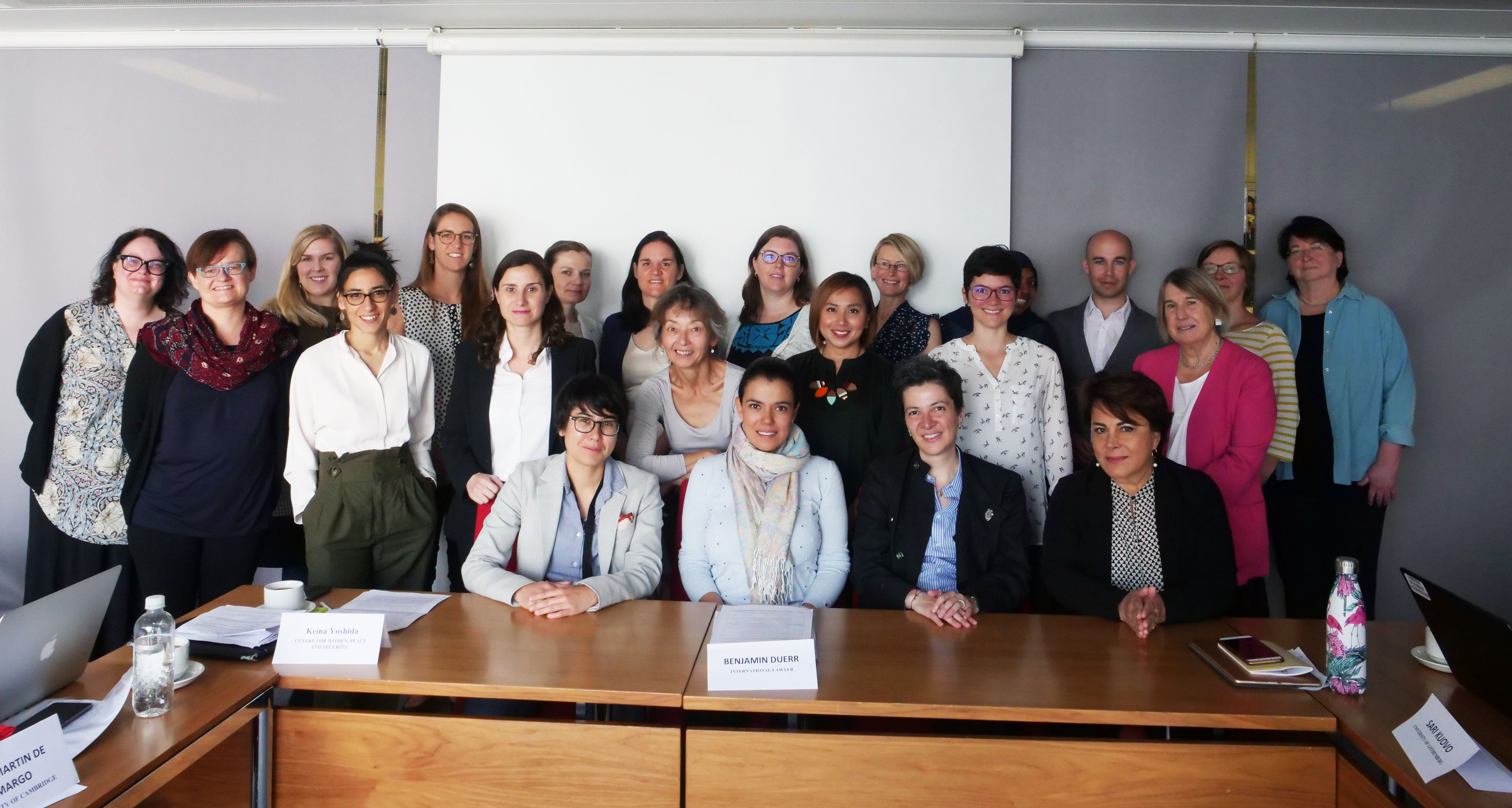 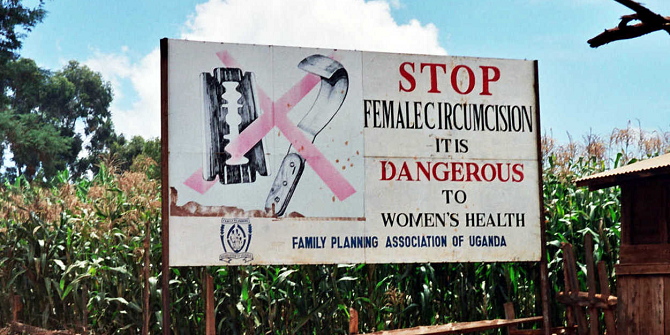 Female Genital Mutilation should be recognised as a form of torture