Sexual crimes against women and girls are severely underreported to the police, allowing for impunity of perpetrators and causing huge socioeconomic costs for survivors and the society. In this article Daria Denti and Simona Iammarino show that an effective way to stimulate survivors to report is allowing them to access nearby specialised support.

Considering England and Wales, data shows that the local availability of refuges and advisors increases the propensity to report sexual crimes to the police by 20 per cent per year. These figures are useful to understand which initiatives are effective in countering the under reporting of sexual crimes – an open and highly policy-relevant question needing sound answers to help survivors to come forward and seek justice.

Among the programmes that should stimulate sexual crime reporting, the provision of evenly geographically distributed and 24/7 available Violence Against Women and Girls (VAWG) support services is considered particularly relevant by practitioners and institutions. Observers suggest that a stimulus towards reporting the crime comes from spatially close support services for survivors of sexual offences, like refuges and advisors. Still, the evidence about the effects of nearby support on the reporting of sexual crimes remains scattered and mainly qualitative.

Existing research from the British Medical Association and from the European Commission details this, showing that survivors feel more empowered after referring to a specialised support service close by. By being able to reach out for help without having to bear the further anxiety given by searching, travelling and waiting, survivors feel less isolated. The local availability of support services also signals that there is a local commitment to a culture of respect of women, which can contribute to reducing the perception of socio-cultural prejudices, reinforcing the survivors’ willingness to seek justice.

However, qualitative investigations do not convey any measure of the impact of nearby VAWG support services on the survivors’ propensity to report. These impact measures are important for policymakers who are working to prioritise local VAWG support services, given that such services are disappearing from many communities as a consequence of the combination of austerity-driven reduction in the government spending on social initiatives, and of the devolution of these initiatives to the local level. Evidence on the impact of VAWG support services on crime reporting is also needed to contribute to the assessment of the overall effectiveness of these services given that their even spatial distribution is specified as mandatory by the Istanbul Convention signed in 2017, the first legally binding instrument covering all forms of violence against women in Europe.

services are disappearing from many communities as a consequence of the combination of austerity-driven reduction in the government spending on social initiatives, and of the devolution of these initiatives to the local level

The austerity programme also imposed relevant cuts to local public budget spending through the reduction of the overall flow of state-level grants supporting local budgets. Hence, local authorities had to decide whether or not to provide VAWG support services considering their tight budget decisions. The sizeable impact of the severe budget cuts has led to more than 75 per cent of England’s local authorities slashing their spending on VAWG services between 2011 and 2017, with a net reduction in the number of local VAWG services, and an increase in the spatial dispersion of services around 25 per cent.

Our research estimates the impact of VAWG local support services on the survivors’ propensity to report, comparing changes in reporting in places where these services continued to be locally available after 2011, to changes in reporting in places where such local support were not locally provided after the austerity devolution. We collected data – disaggregated at the levels of authority that provide VAWG services, – about the changing landscape of VAWG services across England and Wales covering the period 2004-2016. We performed a comparative case study contrasting police reporting in Brighton and Hove, where the support services continued to be provided, to police reporting in an algorithm-designed place designed from a weighted average of places that were similar to Brighton and Hove before the introduction of the local policy (counterfactual place) but with no provision of local support services for survivors of sexual crimes after the policy shift.

In Figure 1 below, the black line shows the trend in police reporting of sexual crimes in Brighton and Hove. The green line shows the same trend in the counterfactual place. The trend in the propensity to report for the latter closely matches the corresponding trend for Brighton and Hove before the introduction of the local policy in the latter post-2011. The upward trend between 2008 and 2010 is concurrent with the commitment by the UK Government to improve VAWG support services. The gap between the two lines measures the impact of the provision of support services in stimulating police reporting. The vertical black dashed line marks the devolution of the provision of VAGS support services to the local level; the vertical red solid line marks the beginning of the country-wide high-impact media campaign referring to the “Operation Yewtree” in 2013. 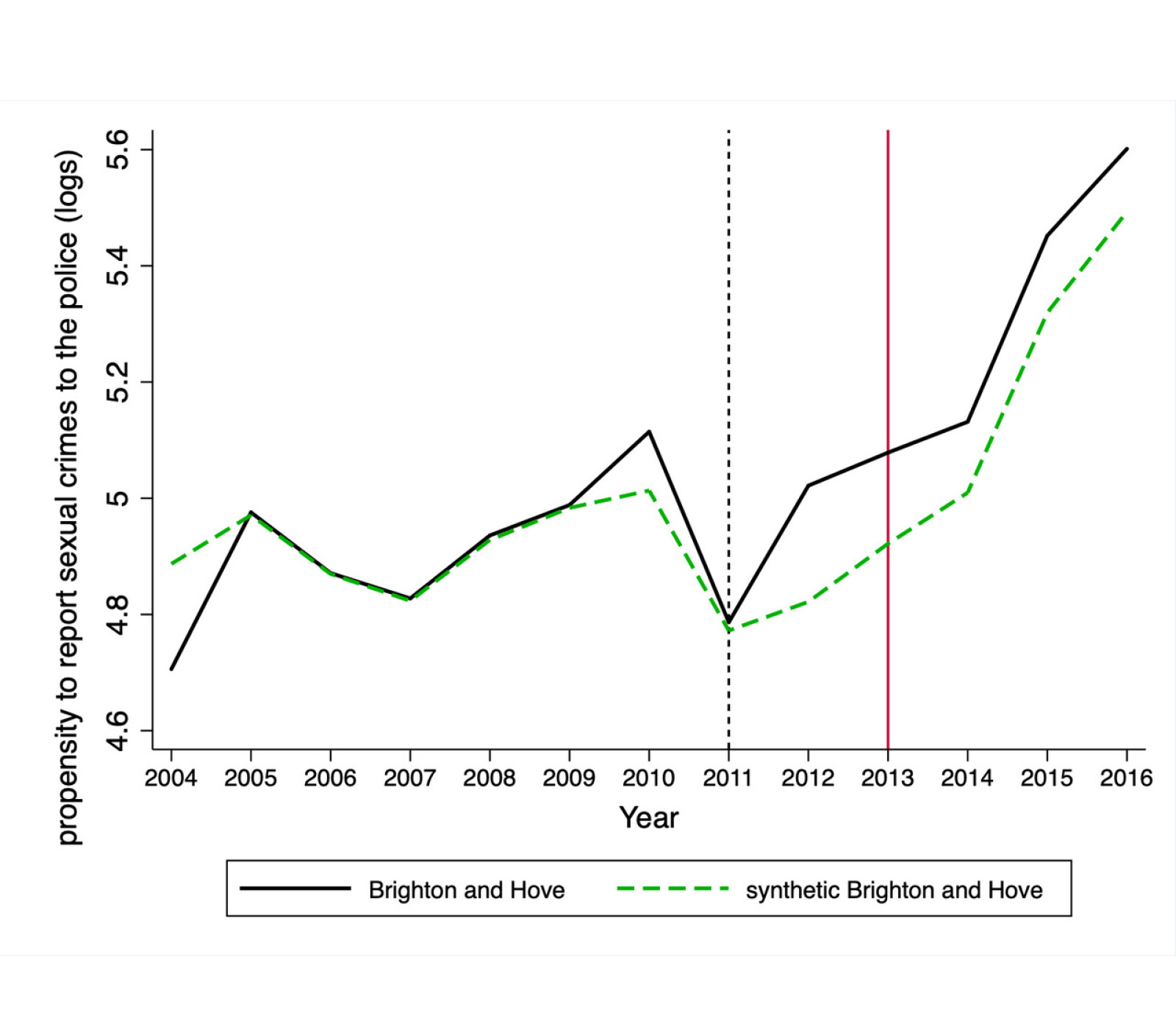 From this comparison, our results show that the provision of specialised support services increased the propensity to report sexual crimes by around 20 per cent on a yearly base. The positive impact of support services in stimulating survivors to seek justice does not vanish when other measures that favour reporting are implemented, such as having female police officers and high-profile media campaigns. In fact, as is also evident in Figure 1, the reporting of sexual crimes in Brighton and Hove remained higher than the reporting in the counterfactual place even during the media coverage of Operation Yewtree – the high-profile investigation into sexual offences of certain public figures – that is acknowledged to have promoted a country-wide rise in reporting of sexual crimes.

From a policy perspective, our results corroborate the importance of a spatially even provision of VAWG services for the survivors of sexual violence as an effective initiative to counter under reporting of sexual crimes. The reduction of under-reporting of sexual crimes, and the consequent drop in the impunity of perpetrators, contribute to breaking the vicious cycle of repeated victimisation, on-the-loose offenders searching for survivors and the consequent vast socioeconomic costs. Notably, the results from our study endorse the aim of the Istanbul Convention, and the stances of practitioners, women-rights organisations and institutions – such as the Council of Europe and the United Nations – that have been campaigning for the spatially even distribution of specialised services for the survivors of sexual crimes.

This blog is based on the report by the authors: Coming Out of the Woods. Do local support services influence the propensity to report sexual violence?

Daria Denti is a Visiting Research Fellow at the Department of Geography &amp; Environment of the London School of Economics and Political Science (UK). Her main research interests are: the spatial socioeconomic determinants of oppressive violent behaviours; geography of human rights violation and policy evaluation. www.dariadenti.org

Simona Iammarino is Professor of Economic Geography in the Department of Geography &amp; Environment of the London School of Economics and Political Science (UK). Her main research interests are: Geography of innovation and globalisation; Regional and local economic development and policy. http://www.lse.ac.uk/geography-and-environment/people/academic-staff/simona-iammarino 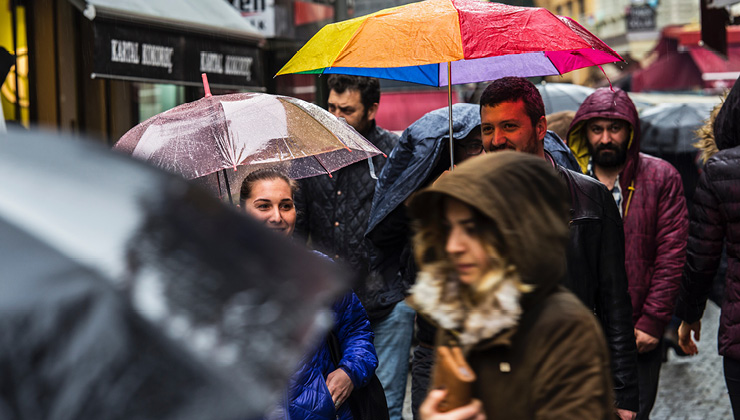