Charles Majinge is a PhD student in the Department of Law and his thesis is entitled The United Nations, The African Union and the Rule of Law in Southern Sudan. Ahead of Southern Sudan’s independence on 9 July, he outlines the challenges ahead for the new state.

As Southern Sudan prepares to become an independent country on 9 July, it faces more unprecedented challenges than any new country in modern history. Its historical economic, social and political marginalisation means that the region must start from the scratch to build critical institutions of governance and infrastructure essential for social economic development and political stability.

As a result of conflict, the majority of its population are illiterate. Vital services such as roads, running water, electricity, education and health facilities barely exist and those which do hardly function or provide good services.

The biggest challenge perhaps is the ongoing political instability in the region. Increasing armed rebellion poses the greatest danger to the survival of Southern Sudan as an independent and prosperous country.

Its current relationship with the North, which is at all time low, requires urgent and deliberate redress to ensure that the two can have a ‘peaceful divorce’ to enable them to co-exist peacefully as friendly neighbours.

This is particularly necessary given the historical ties between the two and the dependence of the South on the North for vital goods and services essential for its survival.

While it is acknowledged that the international community will continue to play a vital role in the reconstruction process, Southern Sudan under the ruling party SPLM will have to do more.

The Movement will need to articulate clearly and advance strategies on how it will fulfil the hopes of its citizens who have supported the struggle and now look forward to benefit from the ‘fruits of independence’.

The current grievances advanced by various rebel movements are based on issues such as government-sanctioned corruption, poor and worsening living conditions of the people, bad governance, nepotism, political marginalisation of those viewed as government opposition and lack of political will of government officials to fulfil hopes and aspirations of citizens who painstakingly and at a great sacrifice supported the liberation struggle.

It will be the responsibility of the government to address these challenges clearly if Southern Sudan is to start to build a nation on a foundation of the rule of law and respect for the rights of its people.

Southern Sudan will have to enhance its commitment to building and respecting the rule of law and good governance while maintaining national unity among its diverse society.

It would be unhelpful for the international community to invest resources in building vital rule-of-law institutions if ordinary citizens lack faith in them, and rather consider these institutions as intended to maintain the status quo of the ruling elites.

It would be a pity if Southern Sudan fails to learn some important lessons from African countries whose hopes and aspirations for a better future  in the wake of decolonisation were dashed by endless conflicts emanating from dictatorship and venal governance sanctioned by the elite – a tragedy which continues to inflict misery upon many Africans today.

The future of Southern Sudan as a strong and prosperous country or a failed country will ultimately be determined by the Southern Sudanese elite.

How they involve their fellow citizens in decision-making, relate to their neighbouring countries –  especially the North – and allocate revenues from their vast resources will determine how the country emerges from this critical period of its history.

While the international community will continue to play a vital role in assisting the country to walk on its own two feet, it is Southern Sudanese themselves who will have to get their act together and build their country.

Critical to this task will be maintaining the unity of the diverse nationalities in the new nation, and the extent to which the government undertakes efforts to improve the social economic conditions of the Southern Sudanese, who have paid a heavy price for their independence. 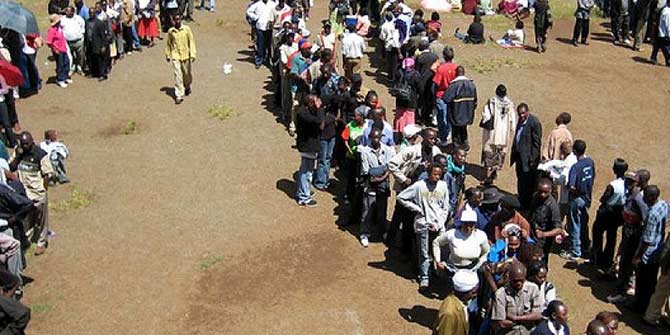 Disappointing democrats: exploring the link between democratization and electoral turnover

Bad Behavior has blocked 5746 access attempts in the last 7 days.