With a mix of old-guard and marginal opposition candidates, it is unlikely that a leader with fresh ideas will secure power in Algeria’s April 17 presidential elections, argues LSE’s Nabila Ramdani.

Images of a frail old man insisting he is fit to govern will do little to persuade Algerian voters that Abdelaziz Bouteflika is the president to lead them forward into a democratic future.

There have been few pictures of the indefatigable 77-year-old over the past few weeks, but those that do appear smack of desperation. He is campaigning for elections on April 17 by proxy, mainly through his former prime minister, Abdelmalek Sellal. Bouteflika does not attend public meetings and only informed his fellow citizens he was standing for a fourth term by letter.

Bouteflika has now held the top job for 15 years, after already stamping his mark on his country’s turbulent history; yet he insists he needs more time. He admits that his “heavy responsibilities” have, in part, affected his health but thinks he can put a recent stroke behind him to triumph.

The problem for Algerian democracy—and indeed the principles of the Arab Spring—is that Bouteflika is undoubtedly the favourite to beat the five candidates standing against him. He gained a farcical 90.24 percent of the vote in 2009, with those beaten alleging their main adversary had been electoral fraud. Opposition politicians called for a boycott five years ago after claiming “industrial-scale” cheating, and there were violent disturbances in poorer parts of Algiers over this suspected rigging.

This is not to say that Bouteflika does not have a huge amount of support across a country he has served, at times with genuine bravery, since the start of its war of independence from France in the 1950s. He joined the National Liberation Army as a teenager and became foreign affairs minister soon after freedom was won in 1962. Security topped Bouteflika’s manifesto when he first became president in 1999, at the tail-end of Algeria’s cataclysmic civil war in which up to 250,000 people died. A terror campaign by Islamist insurgents continues to this day, with even Bouteflika’s fiercest opponents conceding he has sometimes had no option but to sacrifice democratic ideals to combat a ferocious enemy.

What those same opponents also argue, however, is that Bouteflika is now nothing more than the figurehead of a reactionary military regime that has had its heyday. His National Liberation Front (FLN) party is the direct continuation of the nationalist group that coordinated victory against the French. It was well organized, it unified disparate groups, and it carried Algeria through the post-colonial period with often ruthless efficiency, always with the loyal support of the army. But its authoritarian, rigid style of government is not an obvious choice for a country desperate to live up to its immense potential in the year 2014.

Algeria is not only the biggest country in Africa, but a leading OPEC oil producer and the third-largest supplier of natural gas to the European Union. Bouteflika’s socialist model of government, in which the state dominates the economy, has stifled privatization and imposed restrictions on dealings with foreigners. Wealth has by no means trickled down through to a population of which up to 25 percent live below the poverty line. The majority of these people live in rural areas, where access to everything from clean water and healthcare to education is extremely limited. In the cities and towns, unemployment rates are going up, especially among the young, whose anger against the government regularly breaks out in illegal demonstrations. This is despite Algeria’s more than 150 billion dollars in foreign currency reserves, and a comparatively small middle class enjoying privileged lives among a population of 36 million.

A brief analysis of those standing against Bouteflika in a few days’ time does little to instil confidence that the election will be the solution to such inequality. Former prime minister and justice minister Ali Benflis his main rival, got just 6 percent of the vote when he stood against Bouteflika in 2004. At almost 70, he returns following a 10-year absence from politics during which he has regularly blamed corruption for his poor showing a decade ago. He still speaks openly about vote rigging, saying that anti-democratic practices will almost certainly prevent him from enjoying victory this time around too.

Benflis’s previous experience of government was as a close ally of Bouteflika, meaning that in the unlikely event that he does win, he will hardly represent a new chapter in Algerian politics. His age and former closeness to the generals and intelligence officers who effectively run Algeria today do not suggest a break with the past even if he becomes president.

Modern Algeria has a good record for promoting women’s rights, so it is no surprise to see Louisa Hanoune—a 59-year-old MP representing the socialist Workers’ Party, and who describes herself as “Algeria’s Chávez”—entering the race. Hanoune comes from a generation of women who have benefitted greatly from those who struggled so hard against French colonizers during the war of liberation, often taking up arms themselves alongside fathers, brothers and husbands. Algeria’s Family Code was amended in 2005 to grant women more rights, but Hanoune wants absolute equality between the sexes in a country where around 30 percent of representatives in elected assemblies are currently female. Hanoune is on the far Left, however, and her previous activism led to her being arrested and imprisoned twice during the 1980s—suggesting that 2014 will not see Algeria’s first female president.

Human rights activist and trained optician Ali Fawzi Rebaïne, 59, has also spent time in prison. He was arrested and sentenced to more than a decade in jail in 1985 for undermining state security and belonging to a banned group: Algeria’s first human rights league. Rebaïne was freed under a presidential pardon two years later, and now heads the minority Ahd 54 party. This is the third time Rebaïne has stood in presidential elections, and he is pretty much making up the numbers, along with 60-year-old Moussa Touati, a former soldier who founded the Algerian National Front in 1999. Touati has also stood twice before.

In a country where almost half the population is under the age of 24 it is telling that the youngest candidate is 50-year-old Abdelaziz Belaïd. The qualified doctor and lawyer has headed the opposition El-Moustakbal Front (Future Front) since 2012, after quitting the ruling FLN. Belaïd does at least believe there will be a fair electoral fight, and he has pledged to devout himself to a new generation. “Anyone who thinks that the results of the election are known and that Bouteflika will win is better off retiring from the race,” he said earlier this month. Belaïd also promised to build a “developed and democratic” Algeria, calling for power to be “ceded to young people.”

Bouteflika has said that his “generation is over,” and that the old guard needs to make way for a new, reforming group, but this list of candidates hardly inspires confidence in the election. Turnout is expected to be as low as ever, with potential voters expressing widespread scorn with what many view as show elections. Up to a fifth of ballot papers were spoiled in last year’s parliamentary elections, as people protested against the weakness of the elected chamber. Power undoubtedly lies with the FLN’s backroom boys and—crucially—the security services who believe that any relinquishing of it might compromise stability.

The reality is that Algeria is not just a major player in the global economy, but of key strategic importance in the fight against radical Islamic terrorism around the world. Its security is as important to Western powers as it is to those who are based there permanently.

One only has to look at the way with which the Bouteflika regime dealt with the In Amenas hostage crisis early last year to see how committed they are to keeping the peace. Commandos stormed the gas field, where some 685 Algerian workers and 107 foreigners had been captured, leaving 29 terrorists dead, along with at least 39 hostages. The counter-attack was considered imperative because In Amenas was run not just by Sonatrach, the Algerian state energy company, but also by the UK’s BP, and Norway’s Statoil. Just as importantly, it supplied 10 percent of Algeria’s natural gas.

But security is important in any country, and the old ‘Pouvoir’ cannot hang on forever, especially as their legitimacy is mainly rooted in a war that ended more than 50 years ago. Dynamic, modern leadership is essential for Algeria, and it needs to come soon.

Beyond the election result, another near certainty is that a decisive change in Algeria’s power structure is unlikely to come from the street. After decades of bitter conflict, few Algerians are in the mood for expressing the kind of dissent which saw revolutions in neighboring countries such as Libya and Tunisia. Memories of the 1990s, Algeria’s ‘Black Decade,’ and indeed the war of independence figure strongly in the minds of any activists thinking of taking on the highly disciplined and well-equipped state security forces. Despite the influence of the Internet on the popular consciousness, most Algerians receive their news and comment from state-approved media, meaning there is even less chance of an unauthorized opposition rallying people to revolution. In these circumstances, an utterly predictable presidential election will provide little reassurance to would-be democrats.

Nabila Ramdani is an award-winning French-Algerian journalist, columnist and broadcaster who specializes in French politics, Islamic affairs and the Arab world. Follow her on twitter @NabilaRamdani. 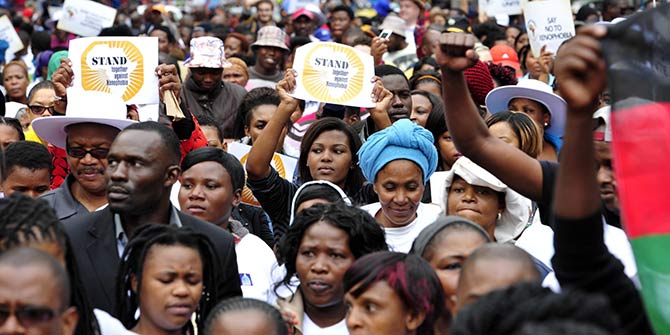 Bad Behavior has blocked 3938 access attempts in the last 7 days.