What is the relationship between anger and justice, especially when so much of our moral education has taught us to value the impartial spectator, the cold distance of reason? In Sing the Rage, Sonali Chakravarti argues that public emotional displays such as those in the South African Truth and Reconciliation Commission, which  from 1996 to 1998 saw individuals taking the stand to speak about the atrocities of apartheid, are of immense value and vital to the success of transitional justice and future political possibilities. This is a thought-provoking read which will interest readers in politics, history and IR, writes David Singeisen.

“With great power”, so the saying goes, “comes great responsibility”. Sing the Rage carries on Sonali Chakravarti’s interest in public reconciliation after mass violence, expanding upon previous political thought to address the role of anger within transitional justice. Anger is acknowledged to be a variable, uncertain element. Nevertheless Chakravarti concludes that it can be a ‘type of constructive exchange’ within the reconciliation process. Those involved, it seems, have a responsibility to consider anger when (re)building their polity.

Both theoretical writings and evidence from South Africa’s post-apartheid Truth and Reconciliation Commission (TRC) are discussed here. The ultimate point is that expression of anger and the process of transitional justice are too potentially multifaceted to be contained within an approach solely based on criminal judicial models of transitional justice. For readers new to this subject the amount of theory here is a little troublesome, but really this is a necessary step for Chakravarti to build the methodological framework for processing anger that she has in mind.

Whilst only six chapters, Sing the Rage is a cohesive work – any attempt to separate out some of the points discussed here for further study will inevitably be somewhat unrepresentative. One of Sing the Rage’s great strengths though is the substantial space Chakravarti gives to examining, fairly, the theories of those who would be sceptical of her central premise. Chapters Three and Four especially look at Hannah Arendt and Adam Smith’s approaches to transitional justice and there Chakravarti neatly demonstrates how her approach is both original and yet indebted to those who have gone before her.

Arendt’s overall reluctance to have direct personal testimonies be a part of transitional justice, for instance, is the main theme of Chapter Three (‘The First Skeptic’). Chakravarti concludes that the potential dangers of including unfiltered private expression within the public sphere are not as bad as Arendt insists. The difference between the two is in what safeguards they think are necessary for this process to be effective. Arendt holds that none protect public discourse.  Arendt, Chakravarti argues, exposes the potential dangers of allowing victim testimony without proper safeguards (with the reconciliation process then collapsing ‘into a celebration of victimhood and shallow compassion’).

So what are those safeguards? Chakravarti describes Arendt as keenly delineating between the public and private spheres. This is built upon in Chapter Five (‘Three Values of Anger’), where Chakravarti outlines thoughts on the interpretation of anger. Anger here exists in a variety of dimensions and, so the argument goes, understanding the interaction between these can help show not only the speaker’s experiences but also the ‘challenges to establishing a new political culture’. The dimensions of anger here cover a great range, from the ‘kinetic’ scream to the ‘cognitive-evaluative’ directed judgement. The ‘expression of anger’ is not without cost here – it should be subject to greater scrutiny, and the Truth Commission should be a special area, operating under special rules, for processing that anger. Nevertheless it is the Commissioners’ role to engage with the witness (see Chapter Six, ‘Trust enough to Tarry’). Repairs to the polity can begin as ‘all parties…show a willingness to bear the risks…associated with political life’. In such circumstances, it seems, one must accept that the reconciliatory process is different from that of other transitional justice models, and that one must move beyond the indirect approach favoured by Arendt and Smith.

I found Sing the Rage to be an interesting work – I’d recommend it not only to those interested in this specific area but to any who are concerned with violence, anger and politics generally. It is however a very slightly frustrating one. Earlier I wrote of how the theoretical aspects of Sing the Rage were occasionally troublesome, but necessary. Perhaps the greatest compliment I can pay the book is that it left me wondering far more about the topic. One aspect in particular came back to mind.

Which brings us back to Spider-Man (from whom the quote which opened this review comes from). As one might expect Chakravarti spends some time addressing previous examples of transitional justice, the Nuremberg and Eichmann trials especially. One point that seems evident from what she describes is how the exercising of responsibility in these circumstances came about thanks to the possession of power. We are, admittedly, told that the Nuremberg Trials were highly rationalistic so that they would not be seen as victors’ justice. What though of victors’ justification? That would not have been the first time the Allies attempted to justify their actions through moral comparison (see Richard Overy’s The Bombers and the Bombed: Allied Air War over Europe, 1940-1945, pp. 48-49). The Eichmann Trial meanwhile surely gave credence to Israel’s unique status as a defender of a people as well as being a state.

This is not to suggest that either the Nuremberg or Eichmann Trials were less morally necessary, but that there was an inherent power imbalance with the process. Perhaps ‘power’ is the wrong term to apply to Truth Commissions but my question would be whether there do seem to be more opportunities for Commissioners to shape this process (Desmond Tutu’s public image, for instance, is described as ‘crucial’ for the T.R.C) and thus whether there is not something inherently conservative in what is being done here?

David Singeisen is a third-year History PhD student at Exeter University. His background is principally in international relations and military strategic theory. His research is on early 20th century British defence politics and Army Reform under the Liberal ministries of 1905-1914. 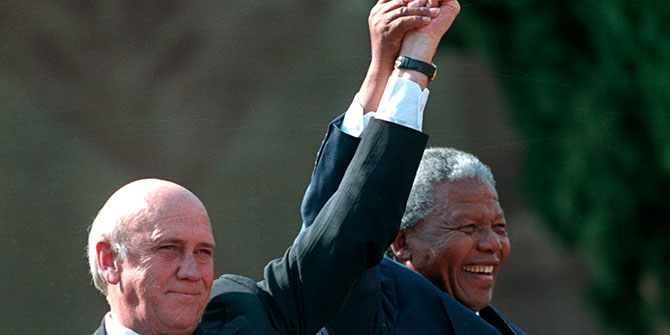