Jonathan Silver praises the book Africa Uprising: Popular Protest and Political Change by Adam Branch and Zachariah Mampilly for providing fresh insight on the histories and geographies of protests on the African continent.

Africa Uprising: Popular Protest and Political Change is a new title from the African Arguments series by Zed Books. In this engaging and accessible book Adam Branch and Zachariah Mampilly seek to provide a sweeping, continent wide response to the global uprisings we have witnessed on the streets of cities around the world over the past few years, reporting of which has often marginalised or excluded the unfolding protests across Africa. Furthermore, as the authors assert, the categorisation of uprisings in North African countries as part of the Arab Spring or of South African exceptionalism should not preclude accounts that claim to write authoritatively on the place we call Africa. This wide ranging and well put-together book examines the diverse histories and geographies of protest in Africa to suggest both new insights to these political ruptures, potential, if uncertain futures and finally how they might help us rethink the global uprisings that began in 2011.

After an introduction Branch and Mampilly set out their core argument and key contribution of the book. This is that the uprisings in Africa (both contemporary and historically) can best be understood through the divisions that characterise many African societies. Taking Chatterjee’s (2004) notion of civil and political society the authors situate it within the resistance to colonial and post-colonial rule. Branch and Mampilly establish a tension here that they assert runs throughout this history. Chatterjee’s terms, generated from his experiences in India are firmly grounded within the Africa context and elucidated through examining the opposing ideas of two towering intellectual figures, Franz Fanon and Kwame Nkrumah. The main divide between Fanon and Nkrumah is traced to the countering ideas of non-violent resistance and ‘Wretched of the Earth’, lumpenproletariat uprisings that offered very different responses to the issue of breaking imperial rule.

The authors go on to outline the consequences of Fanon’s critique of independence struggles such as those in Ghana in which the, “Such a mode of decolonialisation would set the stage for the pathologies of colonial rule after independence” (p31) that perhaps best illuminates the unfolding analytical orientation in the book. The disappointments of “multiparty regimes and neoliberal economics” in the late 1980s and early 1990s and the limits to the capacities of civil society is thus understood both as the precursor to the third wave of protest which the book focuses on and understood historically as emerging from the mistakes of the generation engaged in anti-colonial struggle, further perpetuated by the failure of civil society (such as NGO’s and the educated middle class) over the last 30 years to reach out beyond their narrow political focus.

The book continues with empirically rich accounts of uprisings in a number of countries across the continent. They take examples of Occupy Nigeria, of ‘walk to work’ protests in Uganda, the histories of protests in Sudan and the build-up and response to anti-government protests in Ethiopia to provide rich and textual accounts of the histories, make ups, successes and failures of these uprisings providing fresh and important perspectives that will surely be welcomed by activists struggling for social justice in these places.

Core to the authors’ argument is the ways in which these uprisings are limited by differences and divisions within each of the societies studied as well as the repressive state apparatus that have if anything intensified over the last decade.

The authors show the often intractable difficulties not just of civil and political society outlined above but of bridging the urban and rural divide in African societies through the political distance that exists between these constituencies but also the dialectical repercussions of political demands (for instance a lowering of food prices in the city hold the potential to further impoverish farmers in the countryside). Ethnic and religious differences form another key decision that has restricted the potentials of uprising from the schisms between North and South in Uganda to the intense heterogeneities of different peoples that make up Africa’s third largest country of Sudan.

As the book explains, little visible change has occurred in Uganda, Sudan and Ethiopia after the latest wave of protest beyond the increased securitisation and militarisation of urban space, clampdowns and restrictions on activists and opposition politicians, mirroring the failures and disappointments of uprisings elsewhere. This is not to say the authors ignore the future potential challenges to these violent regimes and the neoliberal economics that have done so much to stymie social justice over the last few decades, rather they highlight that a better grasp of the schisms of these societies generally and within the protests specifically is a pre-cursor to mobilising across civil and political society, urban and rural and religious difference.

Finally and perhaps most pertinently for readers working on or interested in similar issues elsewhere Branch and Mampilly suggest that, “engagement with African political society protest can be a starting point for rethinking the ongoing global wave of protest” (p201). Making the provocation that such manifestations of political society have a long history in Africa as activists have fought against “choiceless democracies and austerity for decades” brings a new Afro perspective to ongoing global debates in challenging austerity, authoritarian governance and the one percent. This idea of how places such as Uganda, Sudan and Ethiopia have prefigured global regimes of austerity is an important contribution of the book, challenging academics and activists elsewhere to take seriously the African experience and to learn from some of the limitations and potentials that are explored in well-informed case study chapters.

Dr Jonathan Silver is the Leverhulme Fellow in the Geography Department at the University of Durham. Follow him on Twitter @InvisibleMapper.

Chatterjee, P. (2004) The politics of the governed: popular politics in most of the world. New York: Columbia University Press. 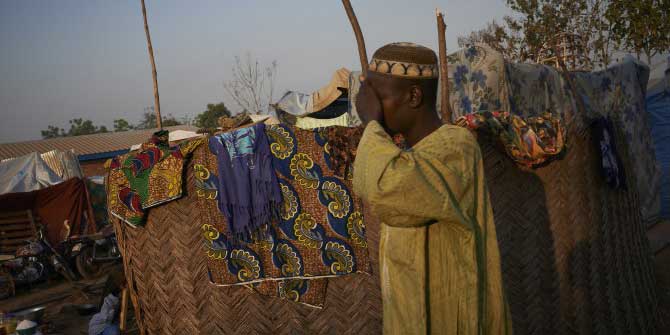 Bad Behavior has blocked 2647 access attempts in the last 7 days.