The African Union (AU) has until its Summit in Addis Ababa from 22-31 January 2017 to rescue itself from institutional sclerosis. A coincidence of fiscal, succession, diplomatic and governance crises jostling for the attention of its forthcoming summit will afford the bi-annual conclave of Africa’s rulers a rare opportunity to re-invent the organisation or risk irrelevance. Without a reputation, however, for bold, imaginative decision making, the odds remain slim that the outcome of the summit will be anything more than business as usual. That will be a debacle for the organisation and the continent.

A fiscal crisis long in the making

As with many things, the origins of the AU’s crises begin with money. For too long, it has been quite poorly funded. Many sub-regional organisations, including the Economic Community of West African States (ECOWAS) and, for a long time, Colonel Khaddafi’s Community of Sahelo-Saharan African States (CEN-SAD), were much better funded. Despite their fondness for the empty pomp and circumstance of their ritual annual summits, many of the continent’s rulers have been reluctant to pick the tab for running the organisation. As the role of the AU in regional peace and security has grown in the last two decades, much of its appropriations have come from non-African countries in Europe and North America, all too happy to outsource potential African military and diplomatic crises. The AU has been equally happy to take the money.

The AU began to look for solutions to this untenable position in 2001. Ten years later, in 2011, Nigeria’s former ruler, Olusegun Obasanjo was invited to lead a review into AU’s funding. After receiving his report, a retreat of Africa’s Presidents and Foreign Ministers in Kigali, capital of Rwanda, on 16 July 2016 agreed “to conduct a study on the institutional reform of the African Union (AU).” Two days later, the AU Summit meeting in Kigali requested Rwanda’s President, Paul Kagame, to lead the study and “report on the proposed reforms and thus put in place a system of governance capable of addressing the challenges facing the Union.” President Kagame’s report will be on the agenda at the Addis Ababa summit.

A crisis of institutional succession

Also in Kigali, the AU was supposed to have elected a successor to the disappointing tenure of the Chairperson of its Commission – as the AU Secretariat is now called – South Africa’s Dr. Nkosazana Dlamini-Zuma. It could be said that much of Dr. Dlamini-Zuma’s tenure, sadly, was spent in pursuit of her undisguised ambitions to succeed to South Africa’s Presidency. The credentials of the candidates on parade to replace her in Kigali were indifferent. Faced with this line up of choice without change, the Kigali summit decided to delay elections by six months.

Four months later, however, well into his stride on the brief to reform the AU, President Kagame reportedly requested the AU to defer the elections pending the completion and consideration of his report. If his recommendations are adopted, it is argued, they may redefine the structures, processes and person specifications for the job. Many of his peers, however, are already fully invested in the campaign to replace Dr Dlamini-Zuma. Botswana, Chad, Equatorial Guinea, Kenya and Senegal have put forward candidates. Their Presidents and their envoys are criss-crossing the continent, negotiating bargains and grubbing for votes. Few of them seem prepared to suspend their ambitions for continental conquest until President Kagame’s reform proposals are disclosed.

The outcome of the Addis-Ababa Summit will hinge on the somewhat procedural issue of what takes precedence: consideration of Kagame’s reform proposals or the elections to the AU Commission. If the Heads settle for the former, the likelihood will be a hold-over Commission, possibly with Kenya’s Erastus Mwencha, the current Deputy Chairperson of the AU Commission, at the helm in acting capacity. This may not be entirely unacceptable to Kenya which has run an energetic campaign on behalf of its candidate. If not, then the Summit will be consumed by election fever. Either way, few will mourn the exit of Dr. Dlamini-Zuma.

A crisis for regional diplomacy and governance

Whether the elections take place or not may hinge on and determine the outcome of Morocco’s application to rejoin the continental body that it left in 1984, following the recognition of the Saharawi Arab Democratic Republic (SADR). As an implicit condition for its re-admission, the King of Morocco has personally waged a full-court press garnished with ostentatious Royal generosity, asking African countries to throw the SADR out of the continental body. The historical claims of the SADR are well founded in the Charter of the United Nations and the Constitutive Act of the African Union, as well as judicial opinions of the International Court of Justice and the European Court of Human Rights, among others.

To achieve its goals, Morocco needs the votes of two-thirds or 36 member States of the AU, the same number needed to install a new Chair of the Commission. At the Kigali Summit in July 2016, up to 28 countries (out of 54) appeared prepared to vote to exclude SADR from the body.

The leaders who meet in Addis Ababa may need to be reminded that the first objective of the Organisation of African Unity (OAU), predecessor to the AU, was decolonisation. Morocco’s mission to annex the Saharawi subverts this. As a pre-condition for granting its application, the AU could easily require Morocco to renounce all claims to the territory of the Saharawi. As a stop-gap measure, they could also refer the question of the legal status of the SADR to the African Court on Human and Peoples’ Rights for a judicial opinion to govern the diplomatic and political decisions thereafter.

The other issue is The Gambia. At the end of 2016, Gambia’s President, His Excellency, Sheikh Professor Alhajie Dr. Yahya Abdul-Aziz Awal Jemus Junkung Jammeh, Naasiru Deen Babili Mansa, (Colonel Retired), Commander-in-Chief of The Armed Forces and Chief Custodian of the Sacred Constitution of the Gambia – to afford him his full title – conceded after clearly losing a general election whose outcome he could not predetermine (despite his best efforts). More than a week after his concession, however, Jammeh claimed non-existent powers to annul the election, requisition a fresh one, and sit tight in the interim. He then sent soldiers to ransack the premises of the electoral commission, exile its leadership and has generally given regional leaders mediating this manufactured impasse the run-around.

Each of these issues on its own would be very weighty. Together, they add up to a very formidable menu for the summiteers in Addis-Ababa. If the Summit agrees with the plan put forward by President Kagame, the ballot for the AU Commission could be deferred. If not, then a vote will proceed. It is too early to predict the outcome but the early indications are that Kenya’s Amina Mohammed and Senegal’s Abdoulaye Bathily could be ahead. A dark-horse cannot, however, be ruled out. Morocco, still not a member of the AU, is reportedly weighing in with diplomatic savvy in favour of a candidate whom it considers more favourably disposed to its divisive designs. The outcome could hinge on the inclinations of Algeria and Nigeria, both strong supporters of the SADR. If both remain implacable, a hung summit could ensue.

Many are hoping for the Gambian issue to be resolved before the summit. Effectively, Mr. Jammeh has foisted a classic unconstitutional regime on the country, contrary to the norms and standards of the AU. The Gambia is due to inaugurate a new President on 19 January but it is unclear whether this will happen. If it does not, Mr Jammeh will become an issue for the Summit. Should this come to pass, many of his AU peers could lack freedom of speech to tell Mr Jammeh what to do because they have also chosen to override  the will of their people and the rules in their own constitutions.

In the language of the AU, the summit will be “closed”, allowing only the accredited delegations and staff to participate in and witness its deliberations. What is clear is that it will give the current class of Africa’s Heads of State a once-in-a-generation opportunity to reshape the organisation. It could mark a break with business-as-usual in the AU. But if they prove unwilling or unable to see the opportunities or to take them, few will be persuaded to take the AU seriously thereafter.

Chidi Odinkalu (@chidiodinkalu) chairs the Section on Public Interest and Development Law (SPIDEL) at the Nigerian Bar and is a former Chairman of Nigeria’s National Human Rights Commission and a LSE alumnus. 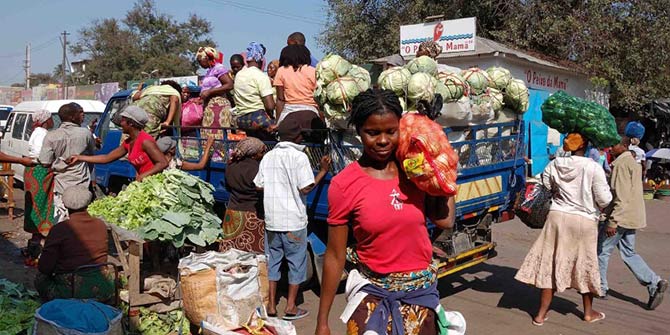 Bad Behavior has blocked 3963 access attempts in the last 7 days.