Throughout the course of his thirty-six years in office, President Robert Mugabe has used coercion and violence to clear the Zimbabwean political arena of opposition and dissent and consolidate his political power. He has singularly blamed the deteriorating economy on western sanctions rather than responsibly attributing it also to his own inadequate planning, mismanagement of both capital and resources, his allowance of economic liberalisation and structural adjustment, and political corruption. Yet, contrary to the singularly critical narratives that tend to dominate, he enjoys some earnest support beyond what western reports about stolen elections indicate.

In conversations related to Zimbabwe, a binary has been constructed between two clear ideological camps: between dogmatic supporters and that of Western states. His supporters, including “revolutionary” camps, sing his praises because of his anti-Western rhetoric and purported anti-imperialist politics, as well as his land reform project. The West decries his political repression and violation of human rights, election-rigging, and his turn towards the east to facilitate the country’s development. The truth about President Mugabe is an amalgam of political realities, and central to the narrative is the complicated and under-discussed relationship between the president and the people of Zimbabwe.

Despite his political track record, President Mugabe has not weathered sustained protests around regime change. Beyond fears of his demonstrated willingness to use violence to eliminate opposition, I believe this can be explained, at least partially, by a combination of four factors: state narratives around political sovereignty, differential understandings of freedom, the absence of unifying class consciousness, and a lack of a unified political opposition.

Following independence in April 1980, a number of political concessions were made in the name of “reconciliation” and laid out in the Lancaster House Agreement, which was largely seen as a set of compromises as white power structures went largely undisrupted. Most critically, the land issue – an issue of indigenous sovereignty, and perhaps the most unifying politic of Black resistance to colonial rule – went unaddressed. President Mugabe’s refusal to resign or allow regime change is justified, in part, by an idea that the revolution was stalled, and there must be consistent leadership in its continuity. It is no mistake that the ongoing process of land repossession and reform is characterised as the Third Chimurenga, and it is no accident that such vehement western critique has been levelled at state policy (genuine or otherwise) seeking to regain land sovereignty.

ZANU-PF is the party of the revolution, and the president continues to instrumentalise that legitimate legacy to self-confer a lifetime mandate, one not contestable by election defeat. As Simukai Chigudu has previously written, the president uses a narrative of “patriotic history” to legitimise himself and the party as “an ongoing vanguard of Zimbabwean liberation against an external and [neo-]colonial threat as represented by the West.” The party’s refusal to concede to Morgan Tsvangirai in 2008 stems from a national identity-narrative of opposition to the West’s attempt to once again usurp native self-determination. Tsvangirai was supported by the western states, most notably the United Kingdom, and the latter is both legitimately and exaggeratedly the targets of political demonisations.

Because independence was achieved less than forty years ago, memories of subjugation under colonial governance are still visceral for many people. Beyond memories from lived experience, there has been an intergenerational transfer of memory to those born after the fall of white rule. There are, in a number of ways, some direct tensions between more “abstracted” understandings of freedom and universal human rights (due, in some part, to resentments around institutions perceived as “Western impositions”) and the clearer “freedom” that is independence from colonial rule and the opportunity to access resources that would be otherwise rendered inaccessible by the Rhodesian government. This is not to imply Zimbabwean people do not understand or desire political transparency or press freedom or any other political entitlements or rights that may be characterised as “Western,” but rather to attempt to parse through the relationship many people have with the relatively young postcolonial institutions.

Another component to this lack of sustained political mobilisations is an erosion of class consciousness resulting from high levels of formal sector unemployment, most notably an absence of formalised industrial labour forces. With much of the country participating in extra-state informal labour, many people cannot sacrifice valuable work time for political activity (compensated participation in political activity, however, is another story). And with the emigration of a potential vanguard professional/middle class out of Zimbabwe, many of the calls for or deeply sustained conversations around regime change exist within the diaspora, which is inadequate for meaningful internal mobilisation.

Finally, the splintering of political opposition prevents the emergence of a unified popular voice. Former Vice President Joice Mujuru has formed her own party following her expulsion from ZANU-PF in 2015, and the factionalism emerging from MDC is nearly impossible to follow. The #ThisFlag movement attempted to construct a unified non-partisan agenda under the banner of Zimbabwean nationalism. But these energies have thus far failed to translate into actionable political and electoral items and the movement’s momentum has largely fizzled since the protests throughout the second half of 2016.

The succession battle is raging on as President Mugabe’s long belated departure from office draws near. As a new leader vies for power and the country transitions into a new era of governance, it is critical to understand how social conditions, historical narratives, and political institutions have been weaponised to ensure political monopoly by the ruling party.

Zoe Samudzi (@ztsamudzi) is a doctoral student at the University of California, San Francisco and a LSE alumna. 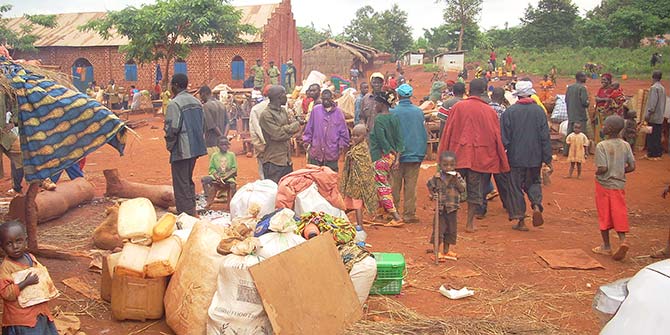 Bad Behavior has blocked 1841 access attempts in the last 7 days.