Simone Datzberger interviews Arnold Aganze whose latest film serves as a stern critique of how NGOs operate in African countries.

“Colonialism was easier to fight than the massive industry of NGOs in Africa.” says Arnold Aganze, a Congolese writer and director of his latest movie: N.G.O. – Nothing Going On. The movie starts off as a light story about how two young Ugandan men, Tevo and Zizuke, hook up and party with mzungu (white/western) girls. When one of the girls offers to help her newfound Ugandan fling support poor women and children in the slums, the movie takes a sudden twist. Instructed by one of their mentors (Mr. Heineken – a successful Ugandan NGO owner himself), Tevo and Zizuke quickly learn how to play the game when it comes to get a piece of that juicy NGO pie. In order to raise “funds” they pull out all the stops: from a project called “Popcorn for Hope” that is supposed to “empower women” and “build capacity”; to restyling a girl from the slums for a photo shoot, as her chosen outfit does not fit the “African image” for successful fundraising.

What appears to be a light-hearted and entertaining comedy on how Ugandans screw mzungus over and over again (in all aspects of life) is at its core a deep critical reflection on the exponential growth of NGOs in the country – if not the sub-Saharan African continent. The exact numbers of how many NGOs are currently registered in Uganda are unclear – but during conversations with local experts working in the industry, estimates range from 9,000 – 12,000. Of course, not all of them are operational and briefcase organisations multiply. It is an industry, according to Arnold, that perpetuates aid dependency, serves as a source of income while at the same time distorts our society and culture. In his critique, he refers to both Western and African NGOs alike. “I am as critical of my own society as I am of Western ones.”

For Arnold, those NGOs aim at creating a perfect society, which will never exist – neither within nor outside Africa. He continues: “When a project fails and does not yield desired results, donors and NGOs simply cannot accept that failure, leave the village and move on. Instead they are writing new project proposals thereby creating new words for the exact same problem.” In Arnold’s opinion, it is the aid sector, most specifically NGOs, that are creating a picture of a poor, desperate and broken Africa. Against this backdrop, he felt the urge to tell his own story, as an African, and change the direction of that narrative.

Initially, Arnold wanted to shoot the movie in Eastern Congo where he experienced first-hand how for decades an invasion of NGOs (and aid agencies) did not bring about the change people were hoping for. As far as the filming was concerned, it was yet much easier to realise his project in Uganda. The entire budget for the movie did not exceed 2.000 USD and all actors (including Arnold himself) were not paid. “At first no one wanted to support us or even show the movie. A lot of those festivals where we could potentially organise a screening are sponsored by foreign NGOs.” Arnold got the impression that they did not feel comfortable with the content of the film and therefore declined. Similar reactions came from Ugandan organisations who argued that if they offered to help, they would shoot themselves in the foot. Eventually, Arnold and his team managed to screen the movie in several African countries and will be soon touring festivals in Europe. The film premiered at the oldest African film festival, the Carthage Film Festival in Tunisia and has been screened at the: Africa International Film Festival in Nigeria; Uganda Film Festival; and the Cameroon International Film Festival. It won in the category “best feature film” at the Mashariki African Film Festival in Rwanda and at the Pan-African Film Festival Fespaco in Burkina Faso.

Towards the end of our meeting, the conversation drifts away from the actual topic and we chat about how Frantz Fanon influenced his thinking and work. Arnold tells me that he would have liked to live a few decades earlier and take an active part in overcoming the colonial struggle. In his view, this was an exciting moment of being black as there was a united Africa fighting for a specific cause. He concludes:

“Today only a few Africans are proud to be African and that is the actual problem we face.”

Confirmed screenings of N.G.O. – Nothing Going On will be held over the summer across Europe at the following festivals:

Arnold also offers to show his film at universities. He wants to engage in particular students in a critical discussion about the humanitarian sector, development aid and the continuous portrayal of a single story about Africa. If you want to arrange for a screening at your institution, please get in touch with: arnoldaga20@gmail.com

This article was first published on the Politics and Voice blog.

Simone Datzberger (@SimoneDatzberge) is a Marie Curie Research Fellow at the University of Amsterdam and a LSE alumna. 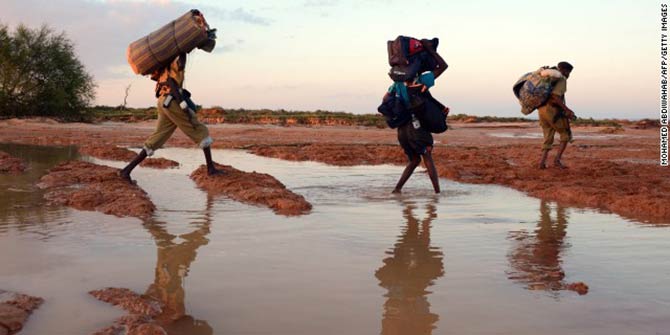 Bad Behavior has blocked 1288 access attempts in the last 7 days.