Richard Moncrieff says  Inside Rwanda’s Gacaca Courts: Seeking Justice After Genocide is an excellent study for those seeking to understand both Gacaca and modern Rwanda.

Rwanda’s Gacaca Courts, a neo-traditional justice mechanism set up to deal with the overwhelming caseload following the 1994 Rwanda genocide, judged hundreds of thousands of people between 2005 and 2012. The courts were locally based, judges were lay people, not lawyers, and crimes were categorised from theft through to murder.

Like all aspects of contemporary Rwanda, views on Gacaca are polarised between those who see them essentially as tools of social control to those who exult their justice and reconciliation bearing qualities. Given the Rwandan government’s harsh reaction to all criticism, o

ften depicted as genocide denial, and in light of the centrality of Gacaca to the post genocide reconstruction project, such polarisation is not surprising.

It is satisfying therefore to read this highly informed and nuanced account of the Gacaca experience from Belgian anthropologist Bert Ingelaere, far better than previous studies. While he would certainly agree with the view of regime critics such as Susan Thompson, that state control permeates everyday life right into rural areas, he underlines the benefits of Gacaca despite its many downsides. In particular the great distance between how Gacaca was intended to work and how it played out in practice. This openness to different versions of the Gacaca “reality” informs a book which offers rare insight, not just into Gacaca but into contemporary Rwanda as a whole.

Through detailed observation of trials on multiple sites, hundreds of interviews including life story accounts, Ingelaere and his team uncover several aspects of the trails that are either counter-intuitive or don’t fit with the official aims or narrative. For example, they find that attendance at the trials by ordinary people, part of its communal reconciliation purpose, fell off abruptly after the initial period. They find some interesting cases of mass prosecution which would help explain the very large number of people concerned – in one case 51 people were accused of the theft of a cow, leading to 31 convictions, the majority for receiving stolen goods.

The book’s main argument is that the actual practice of Gacaca, and understandings of truth and justice, were mediated by the fact that victims and perpetrators live side by side, and by the pragmatic requirements of day to day life. Some used Gacaca to seek advantage, whether settling scores which may have had nothing to do with events of 1994, or seeking to reduce their sentence or reparations payments. Rather than resulting in widespread reconciliation (although instances of that are apparent), Gacaca is described as part of an uneasy “living together” that has sometimes been marked by revenge killings, but more often by silence and mistrust. Furthermore local power dynamics, different in each area, were highly influential in how trials played out. Although driven by inquisition aimed at judicial truth (more than confession and pardon) Gacaca was in fact strongly influenced by strategic testimony and “pragmatic truth”.

One of the outstanding book chapters concerns the role of the State. Ingelaere doesn’t claim that state forces controlled the whole of Gacaca, but they were far from absent. He underlines, surely and rightly, that local governance is dominated by appointed apparatchiks, producing a clear upward accountability. State agents are therefore highly empowered at local level. This allows a “far reaching” (102), although not omnipresent, surveillance of the population, and therefore of Gacaca. For example, at least at the outset, state agents took registers of who attended Gacaca sessions. Unsurprisingly but importantly, the study uncovers ways in which Rwandan Patriotic Front (RPF) crimes were excluded from Gacaca, against the wishes of some at the local level. One sector in the north where research was carried out was barely touched by the genocide, but had been affected by RPF incursions from Uganda in 1993. Some inhabitants who complained that these incidents were not covered by Gacaca were accused of genocide ideology and imprisoned.

The confidence, but also, at least to non-Rwandan eyes, clumsiness, of the agents of control is demonstrated in Ingelaere’s several encounters with them. One person joins a focus group discussion uninvited, at which point Ingelaere challenges him. He says he is an “intelligence agent” there to check that what was said was in line with current government policy. To which Ingelaere points out that if he was a good intelligence agent he wouldn’t have to walk in and announce himself.

Beyond this rather comic aside, the insight into the uneasy relationship between the population and highly empowered state agents, is a very valuable insight into contemporary Rwanda. Ingelaere has used a detailed study of Gacaca to uncover social and political mechanisms which are frequently subsumed in sterile developmentalist debates or in political polemics. He concludes: “There is no reason to assume that such a presence [of state agents] automatically influenced the gacaca process. In fact security personnel attend trial proceedings all over the world

[. . .] Nevertheless, the analysis presented so far suggests that the multi-layered presence of authority figures who are mainly accountable to the centre is deeply felt in the lives of ordinary Rwandans (p. 105)”

Ingelaere closes the book by returning to the negotiations of local life. Two contrasting but intertwined concepts illuminate the relationships which inform Gacaca. Pragmatism or the roughly equivalent Kinyarawandan “ubwenge” is central: “in the highly pragmatic life of the Rwandan hills, tensions and conflicts are kept in the dark because neighbours and villagers depend on each other in their daily activities, and they fight for survival in conditions of shared impoverishment” (p. 147). But so is the “heart”, or in Kinyarwandan “umutima” also close to intimacy or the spirit), and the personal struggle of both perpetrators and survivors to come to terms with brutal violence permeates the book.

If the book has a weakpoint it is that occasionally its conclusions are based on apparently little evidence. The very exhaustive methodology described in chapter 2 is fascinating and convincing, but it seems clear that much of the evidence for the conclusions must remain either in the author’s doctoral thesis or in his notebooks or those of his (rather unsung) collaborators.

“What one labels truth-telling, rendering justice, fostering reconciliation, or providing compensation takes root in the ambiguities of local life. Engaging the past is entangled in the web of a tightly knit face-to-face community, which is difficult for an outsider who is used to different preconceived categories to understand”. Outsider he might be, but Ingelaere has, in this excellent study, given us some tools to understand both Gacaca and modern Rwanda.

Understanding the military takeover in #Zimbabwe 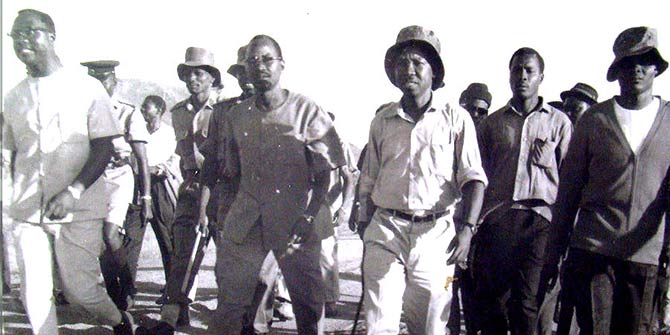