Astrid Jamar continues her analysis of the prominence of aid billboards in Burundi and how these contribute to colonial continuities which in turn shape the public space and public authority in the East African country. In the second and final blog post of this series, Astrid Jamar examines the text, logos and images displayed on the boards, which reveal the highly hierarchised but disorganised nature of aid and its paradoxical paternalist messages.

Burundi is well known for its hills and mountains. However, visitors are always taken aback by the number of billboards promoting the work of aid organisations and other NGOs. In the city of Rutana in the Southern Province, I photographed 20 of these billboards within 200 metres of each other. These boards are so common that most aid workers told me that they pay no attention to them. In the first blog post of this series, I discussed how these billboards and their colonial nature dominate the public space, but it is also vital to dissect their content.

What logos tell us about the nature of aid in Burundi?

The logos displayed on the boards provide interesting insights into the multi-layered nature of public authority in an aid-dependent country. There are more than 60 logos of various organisations on the 20 boards I photographed in Rutana. As listed in the table below, these include Burundian authorities, bilateral and multilateral donors, international organisations, large international NGOs, mid-sized and small international NGOs, national NGOs, and academic research centres and university charities.

The size and order of the logos, as well as the details about the role assigned to each organisation reveal a hierarchy among these actors. Despite this, the jumble of aid billboards points to the overall cacophonic and disorganised nature of aid efforts in Burundi. This is particularly well illustrated by the two adjacent billboards for food security, pictured below. The board on the right shows an integrated approach bringing ten of the most active organisations on food security into one programme coordination around this specific sectoral issue. The board on the left, shows that the EU is also funding a resilience programme implemented by the UN Food and Agriculture Organisation (FAO). In other words, it raises the question why the EU has not absorbed the FAO resilience programme into this other programme if the core objective was to deliver a coordinated approach.

Sitting in parallel, these two boards reflect the undoubtedly important parallel structures involved in the implementation of food security projects, pointing to the limited impact of efforts to improve aid harmonisation over the last decade.

The multitude of initiatives and intervening actors has important consequences for public authority, in particular how public services are provided, created and negotiated. The messy nature of international aid and its complex entanglements, overlaps and divergences between various actors and organisations generate a muddled form of public authority that supposed beneficiaries are forced to navigate to access basic public services. It is in these negotiations that public authority is generated, as practiced and experienced by the people living it. Yet these forms of aid-related authority are infused with colonial structures and discourses.

Strong colonialist undertones can be found in the text and images on the boards – in mixtures of English, French, and Kirundi – which contain explicit paternalistic messages. Examples are:

These exhortations discount initial socio-economic inequalities and structures perpetuating them. Looking at the first piece of text, the word ‘nutrient’ does not exist in Kirundi as such and translation suggestions included food with vitamins and healthy food (the word nutrient was taken from the English online description of the project). This billboard provides health advice as if the targeted rural population has a variety of food options to increase their intake of nutrients. Such a motto clearly suggests people need to eat better. This ignores that food options are based on the ‘beneficiaries’ own agricultural productivity and financial means to buy what is available in a rural market. Inadvertently, this motto suggests being a recipient of their programme would enable ‘beneficiaries’ to eat food rich in nutrients and putting economic inequalities as a secondary factor. Similarly, the employment programme is a typical example of economic empowerment interventions. Again, it suggests that people can gain access to jobs by the creation of value of their existing skills; and hence jobs they already have but which are undervalued.

On the one hand, these boards portray beneficiaries as deprived of agency and/or inferior, for instance as “rural and most vulnerable people”, “affected by the multi-factorial crisis,” “people affected by the conflict,” “orphans and vulnerable children.” On the other hand, the boards also use extensively vacuous, idealistic and technocratic buzzwords in project titles such as ‘performance,’ ‘solidarity,’ ‘protection,’ ‘improvement,’ ‘resilience,’ ‘food security,’ and ‘peace consolidation.’ Such wording does not only legitimise their intervention, it also implicitly reflects the superiority, the uncontested ‘good nature’, and ‘expert knowledge’ of the intervening agent.

Such paternalistic content depicts aid as provided by (superior) Western donors, and as intended to save rural and vulnerable populations from the plight of malnutrition, poor hygiene, and bad morals etc. In sum, we are back here at the familiar image of the white saviour coming to Africa to save the backward locals.

Post-colonial approaches to international aid have long addressed not only the limits of the concepts, models, and structures of aid, but also how these constitute “The Third World” as a space of underdevelopment. Arturo Escobar, for example, highlighted how the development industry was ultimately an expression of Western supremacy, grounded in Western definitions of modernity and underdevelopment. In doing so, development practices also produce hierarchies of knowledge and silence its political effects behind a technical discourse (as Christine Sylvester and Uma Kothari have also written).

Through their paternalistic messages, shiny logos and self-conscious projection of technocratic buzzwords, the billboards symbolise Western superiority and expert knowledge, while trying to achieve the social regulation of Burundian “locals”. Through their omnipresence in the Burundian landscape, this technology of social control has a wide spatial reach.

The paradoxes of paternalism in an authoritarian context

During interviews with 40 international and Burundian aid workers based in the capital about paternalism and colonialism in June 2018, none raised the issue of the aid billboards. Only few had spontaneous opinions about the colonialist undertones, and others were unwilling to comment. From those willing to speak, it emerged that many Burundians felt let down by international aid organisations since 2015. The political crisis and related aid withdrawal created frustration. Many of their international colleagues were evacuated leaving them behind. Funding has been cut. Insufficient measures were taken to protect national staff during the worst of the crisis. One Burundian aid worker states:

“Despite international standards and the machinery that is supposed to protect us, they [the internationals] left us there in the lion’s den … The international community talks with the government while [details about politicians committing crimes]. It is a big failure of the century.” (Interview, Burundi, 2018 – Translated from French by the author)

One reason why many people were hesitant to speak is the current regime’s use of accusations of neo-colonialism to counter criticism of human rights violations and authoritarian practices. The political instrumentalisation of colonialism does not render the paternalistic nature of aid less important.

Some international organisations have been taking steps to reduce the imperialist dimensions of their interventions. Such efforts include the re-localisation of their head offices in the Global South, undertaking action on socio-economic inequality and political oppression in their home country, and hiring nationals in important positions. However, these efforts are limited. In addition, the professionalisation of aid has led to privileging national and international elites over the so-called ‘beneficiaries.’ Ultimately, the ready-made bureaucratic approach to deal with the paradoxes of aid paternalism leaves issues of power unquestioned and marginalised.

Indeed, most aid projects cannot be envisioned without a billboard. Even if most people do not mind them, this blog calls for stronger attention to their colonising function by physically conquering the streets of aid-dependent Burundi and displaying paternalistic discourses.

In conclusion, Mind the Billboards!

Dr Astrid Jamar (@astrid_jamar) is a researcher in the Political Settlements Research Programme, at the School of Law, University of Edinburgh. Dr Jamar’s obtained her PhD in International Development from the University of Sussex in 2016. For the past decade, her research focusses on transitional justice and international aid in the African Great Lakes region. From 2008 to 2011, she worked with several international NGOs and local institutions implementing transitional justice in Rwanda and Burundi. She has worked on various dimensions of peacebuilding, human rights and transitional justice. She is particularly interested in professionalisation of peacebuilding from political and legal anthropology lenses adopting feminist and post-colonial perspectives.

This blog is based of fieldwork undertaken in Burundi in June 2018 thanks to the Law School Research Fund, University of Edinburgh and the UK Aid from the UK Department for International Development (DFID). The author wishes to thank her friends who helped with the translation of billboards text from Kirundi and who travelled with her to Rutana, as well as Patrycja Stys and Judith Verweijen for their insightful comments. The information and views set out in this publication are hers and do not necessarily reflect the official opinion of DFID. 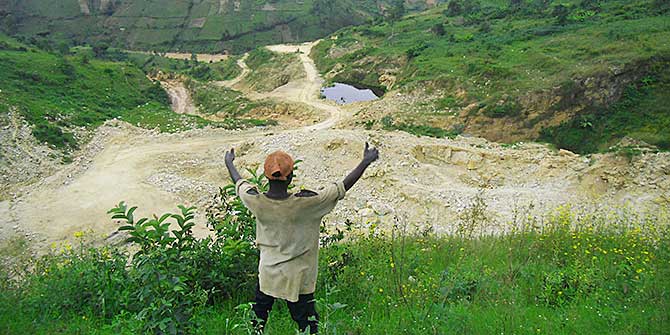 What can Rwanda’s dam building tell us about its politics?

Bad Behavior has blocked 2836 access attempts in the last 7 days.