In the Democratic Republic of Congo, demobilisation programmes aim to reintegrate combatants into everyday life. But there are often blurred boundaries between what is considered military and civilian and, with a less nuanced understanding, potential future security threats could go unchecked.

Combatants’ mobilisation, demobilisation and remobilisation certainly seems to be a never-ending story in the eastern Democratic Republic of Congo. Political leaders are implicated directly and indirectly in both the founding and functioning of armed groups, currently numbering around 120 across North and South Kivu. Many of these groups are the protectors of their ethnic communities in the absence of a State able or willing to provide security. Ongoing research suggests that their persistence is tied up with the failures of the region’s Disarmament, Demobilisation and Reintegration (DDR) programmes.

Within the region, powerful leaders support armed groups financially and materially, often providing uniforms, boots and weapons. To reach sizable membership, they have been known to resort to forced recruitment of former combatants. These groups help leaders to further their own political ambitions, being used to show their power when bargaining for positions and resources from the central government.

Various studies have shown how the leaders of armed groups have become public authorities in their own right in zones under their control. Nonetheless, their authority is tenuously justified and legitimacy is perpetually questioned. Declaring themselves as ‘protectors’ and security providers, they levy monthly taxes on ‘their’ populations in exchange for these services. However, refusal to comply is met with insecurity created by these very security providers.

Scholars of the region associate the failure of demobilisation programmes aimed at these groups with political or ethnic rationales. They often argue that following each demobilisation programme, communities retain a reserve of combatants to avoid potential domination by their rivals, and that political leaders keep some men armed should they have to once again negotiate with the central government. Scholars often frame this as a cycle.

Accordingly, many combatants only appear to be demobilised. They continue civilian life as farmers and merchants. Yet, they have a mixture of responsibilities which are difficult to classify as either civilian or military. Instead of seemingly demobilising and remobilising cyclically, therefore, many former members of armed groups remain combatants, integrated as much in civilian as military life. That is the state and nature of their active membership, as a continuation, not a cycle.

Indeed, the presence of large numbers of ‘auto-demobilised combatants’ in the zone constitutes a potential future security threat. Nearly all are unemployed, and their socio-economic integration remains incomplete. Their dire circumstances and past military careers make some susceptible to voluntary (or forced) recruitment.

‘Formally demobilised combatants’ are likewise only partially integrated. According to Aloys Tegera and Onesphore Sematumba of the Pole Institute the demobilisation process is marked by inefficacy, if not failure, for a host of entangled reasons. Pulling apart the threads they posit:

Professor Grevisse Ditend Yav, who has worked with the UEPNDDR since 2008, stresses that DDR is not just a chapter of the political process outlined in a peace accord; it is one of its consequences. We should not amalgamate the process of peace negotiations (a political activity) and DDR (a technical activity) planned and implemented following these political accords in order to realise and consolidate their objectives.

In a similar vein, DDR programmes and the studies that inform them must be sensitive to the context-specific realities of what being an armed group member is, and what demobilisation entails. Indeed, its predominantly cyclic nature cannot be argued, but some combatants do demobilise and stay demobilised while others never demobilised in the first place. We need to know more about why.

The story is not never-ending. Instead it’s rarely told in a nuanced enough fashion to make it seem anything other.

Papy Muzuri is an independent researcher and collaborator with the LSE’s Centre for Public Authority and International Development (CPAID). Papy holds a Master’s degree in International Humanitarian Law from Université St Joseph (USJ/Goma) and has previously worked for organisations such as the National Commission for Refugees, UNHCR and the Norwegian Refugee Council. 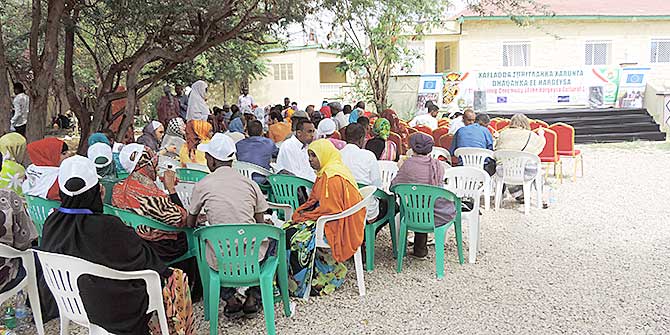 Bad Behavior has blocked 4697 access attempts in the last 7 days.