Conducting research in new socio-economic spaces can bring unexpected challenges. For two researchers in Goma in the Democratic Republic of Congo their identities as white foreigners impacted their relation to power and authority, with ignorance of local customs interacting with privileged access to money and networks.

In the weeks leading up to Christmas Tom and Pat, a research project’s white, expatriate managers, led a training workshop in Goma, overseen by Papy and Keith, its Congolese lead researchers. The ongoing, ambitious project employs social network research and financial diaries to unpick how families manage their social and material resources over a nine month period.

What happened on the margins of the workshop, however, was often as interesting as how the researchers responded to our slides and exercises. Indeed, they brought to light many of the issues the project hopes to unpack.

One of the issues the project seeks to understand is how people in an insecure and unstable context access basic social services and address daily challenges. We are interested in how ‘public authority’ – which can simply be understood as power and politics – is navigated by, and affects, people. We suspect to find that navigating public authority in Goma is more of a daily concern and occupies greater household resources than in other countries where similar methods have been used, such as South Africa or Bangladesh. Nonetheless, before the research had even begun, we had a glimpse of these issues simply by living and working in Goma.

The first way in which the importance of resource, or perhaps more accurately cash flow, management raised itself concerned the researchers attending our workshop and a local boxing coach who periodically helped us to unwind at the end of long days. Much to our surprise, all eight researchers and our coach, all Congolese and residents of Goma, asked us to safely store their cash payments until a decent sum had been accrued. We had assumed that irregularly employed researchers would require daily payments for travel in and around Goma, and that our coach would prefer to be paid at the end of each session to stay on top of the random number of people that turned up for his classes.

Admittedly, it was the run up to Christmas, so our researchers and coach were keen to amass lump sums. Yet, our enquiries also revealed that storing cash with us gave the savers a measure of ‘plausible deniability’ when those in their networks, including close family members, inevitably came asking for loans or loan repayments. For others, we were simply a safer place to keep money than the available, yet widely distrusted, alternatives such as banks or relatives.

The undeniable truth that we are both white also meant, therefore, we were assumed to have enough money to pay the savers back at short notice. Discussion of this common practice encouraged the researchers to ask Tom how much money he keeps hidden from his partner, to which the disbelieved answer was, of course, none.

Although this episode echoes research by others which has shown how households in developing countries often use ‘money guards’ to squirrel away resources for a rainy day, we were unprepared to fulfil this role for people we were only just getting to know. Furthermore, the aspect of not just guarding but also hiding money from one’s relatives or close friends raises an interesting challenge for our future research. Will it really be possible to get a good grasp of how households’ finances are managed if there is a level of subterfuge involved in cash flow management? This is why we have come to believe that our project will rise or fall on the trust researchers can build, and that there will likely be gaps or missing transactions in the financial diaries we collect.

The second episode more directly relates to how public authority operates in Goma to control access to services. It began when one of the Congolese men who lives in our accommodation, Daniel (a pseudonym), fell ill. While out in town one evening, Pat received a telephone call from Daniel’s friend informing us that Daniel was extremely sick and that we should return home. We found him in bed, clutching his stomach and unable to hold down water. He was feverish and afraid.

We decided to take Daniel to the closest hospital and arrived late, waking up the doctor on duty. It was promptly concluded that he had a bout of worms, requiring jabs and IV drips. Frightened, he clung to Pat, who assumed the role of carer and took a trip back to the house to pick up pillows and blankets and water for his overnight stay. In hindsight, and considering what was about to transpire, we probably looked like panic-stricken parents coddling our adopted son.

The next morning our colleague, Papy, thoroughly rebuked us. In his view, our presence at the hospital had likely made a complex situation worse. Daniel was subsequently hospitalised for four days, the last two simply because the bill – greatly inflated due to our presence – was contested by all parties. Instead, we should have asked Daniel’s Congolese friend to take him to the hospital, thereby securing the normally much lower charges for citizens. In short, we were learning the hard way that the costs of accessing services can depend on perceived wealth and socio-economic status. We were also discovering that such ‘hostage situations’ are a common tactic to secure payments for medical services in the DRC.

Addressing this situation required the intervention of our landlord – a local politician – who had previously donated a substantial sum to the hospital and was regularly treated there for ‘free’. After much wrangling behind the scenes and paying a still high but slightly reduced bill, Daniel was finally liberated from the hospital. Papy instructed us to never again make our own decisions and always call Congolese colleagues for advice.

Deeply humbled, we discussed what we had learned about living and working in Goma; most notably, power and authority are relative. Outsiders can run projects and training workshops and function as trusted ‘money guards’, but we still struggle to negotiate services in a city that is not ‘ours’. To be white is, as always, privilege. However, this privilege, combined with our greater access to money and ignorance of the way things work, affects those surrounding us in ways we struggle to imagine and control. This left us somewhat powerless to get Daniel released from hospital and, ultimately, reliant on the intervention of an elite with connections to the institution’s directors.

What does this mean for our project? Ironically enough, it means we are probably on the right track. ‘Getting things done’ in Goma is a combination of having, and drawing on, not just money but networks. Unpacking how both facilitate access to healthcare, water and other social services entails the type of rigorous social network and financial research that out project is aiming to grasp.

The outstanding question remains whether our Congolese colleagues can nurture enough trust with those they meet to gather quality data. We certainly hope they can, but perhaps without any more service-related hostage situations.

Thanks to Astrid Jamar for comments and suggestions on earlier drafts.

Pat Stys is a Research Officer in the Centre for Public Authority and International Development at LSE. 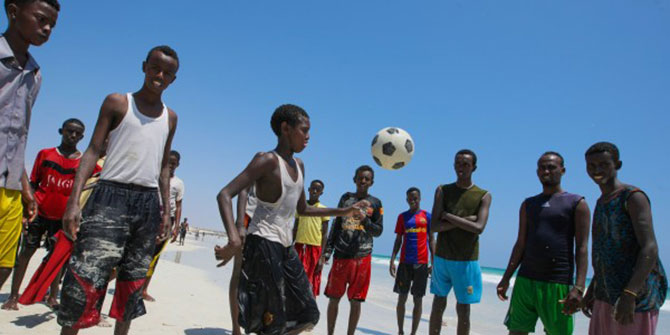 Bad Behavior has blocked 4593 access attempts in the last 7 days.