The charcoal trade in the Democratic Republic of Congo has been framed as an issue of transnational organised crime, omitting the importance of the trade for local populations. Current strategies of heavy law enforcement consequently fail to gain public support, and will remain ineffective.

Virunga National Park in eastern Democratic Republic of Congo (DRC) was recently reopened for tourists, after the park closed in the wake of the kidnapping of two British tourists in May 2018. The kidnapping sparked an in-depth review and overhaul of the security system to guarantee the safety of privileged, mostly Western tourists. Yet the everyday lives of people living around the park continue to be marred by insecurity.

A part of this insecurity is driven by necessary and laudable efforts to crack down on charcoal production and other illegal natural resources exploitation within the park’s boundaries. Whenever parts of the charcoal commodity chain are blocked, armed actors benefiting from this chain seek to take revenge, which puts the lives of park guards in danger. Armed groups seeing their revenues dwindle may also resort to alternative strategies of income generation like kidnappings. This raises the question to what extent weeding out charcoal production and fostering tourism are compatible in the short term.

Aside from armed actor interference, it is also difficult to stop the charcoal trade because it is crucial to the livelihoods of many people living close to the park. While the importance of charcoal for poor households is commonly acknowledged, this dimension gets overshadowed by more spectacular narratives that highlight its role as a source of rebel financing. In particular the FDLR, a Rwandan armed group based in the DRC, is singled out as benefiting from this ‘black gold’.

A 2015 report by the UN Environment Programme and the peacekeeping mission in the DRC (MONUSCO) emphasised that the charcoal trade would benefit ‘transnational organised crime’, thus framing it as an international security issue. This narrative was later reproduced by the NGO The Enough Project. In a 2016 report called ‘The Mafia in the Park’, the organisation speaks of a ‘charcoal syndicate’ and portrays the FDLR as ‘the kingpin in Africa’s Great Lakes region’s organized crime networks’.

Yet, as we show in a recently published article in Antipode, these often rehearsed narratives are problematic in numerous respects. The majority of charcoal is locally consumed, mostly satisfying the demand for fuel in urban centres like North Kivu’s capital of Goma. Moreover, there is little evidence that those who control the commodity chain transfer the revenues abroad.

Rather than ‘transnational criminal networks’, it is mostly Congolese or Congo-based actors who benefit from the trade. This concerns not only rebels but also Congolese security services, which sometimes collude with rebel groups in organising production and trade, as well as tax collectors from various state agencies operating in markets and other points of sale. But many poor people also make a living from charcoal. They include small-scale traders, those involved in tree cutting and felling, or those transporting sacks of charcoal to markets.

It is this crucial livelihoods function that renders the trade acceptable in the eyes of many. Charcoal production may be illegal but it is not seen as illicit.

During fieldwork conducted in villages around the park, interviewees emphasised that those involved in the charcoal chain often have no land or other alternative sources of income. The work is hard and dangerous, but because it is a matter of survival people believe they have no choice.

In many areas around the park, people live in dire poverty. In several of the villages we visited, less than 30% of the children were reported to go to school. These unschooled children have little prospects of benefiting from jobs generated by the park, aside from very occasional and limited day labouring, because most of the jobs in the tourism sector require a school diploma. Furthermore, tourism is concentrated in a very small area of the park and, consequently, the vast majority of people living around the park do not benefit from this sector. Their livelihoods instead depend on small-scale agriculture.

Yet small-scale farmers struggle to make a living. In many areas, there is not enough arable land available, which is partly an outcome of its unequal distribution – a widespread political problem in eastern DRC. Another problem is that the effects of climate change are increasingly felt, bringing drought, torrential rains or hailstones that destroy crops. And in some areas adjacent to the park, crops are eaten by baboons and buffalos.

The difficulties in generating sufficient income through agriculture make involvement in the charcoal trade attractive, even when it means having to work with the FDLR. But people go about this pragmatically: they will deal with whomever controls the production. However, for the park, this collaboration renders civilians complicit with armed groups. As a woman in the village of Katwa said, referring to the park guards: ‘they treat the men harshly and call them “FDLR” and women are accused of being wives of FDLR.’

The involvement of armed groups makes people reluctant to collaborate with efforts to stop the charcoal trade, as they fear actions of revenge. At the same time, the park’s strict law enforcement campaign creates antagonism. Those found in the park suspected to be involved in charcoal are arrested and often transferred to detention centres at the civilian or military prosecutor’s office. The hefty fees they subsequently have to pay to be released often drive them from precarity into poverty.

As one person explained ‘to pay the fines they [detainees] make many debts, and some sell their land. When they get out of jail they have nothing, so all they can do is go back into the park again for charcoal.’

These observations make us question the effectiveness of law-enforcement oriented strategies to stop the charcoal trade. With little collaboration from the population, can operations to dislodge armed groups from production areas be successful? With no alternative livelihoods, will further impoverishing offenders with arrest work as a deterrent?

Whatever strategies are chosen, they will likely be self-defeating unless they place local livelihoods centre stage. The transnational crime narrative has failed to get us very far, and now we should look for its replacement.

Esther Marijnen is a post-doc researcher at the Conflict Research Group at Ghent University. Esther is part of the Centre for Public Authority and International Development at LSE focusing on how public authority is shaped around commodities, nature and conservation in eastern DRC. She also works on the militarisation of conservation and the political ecology of violent conflict.

Judith Verweijen is a Lecturer in International Security at the University of Sussex. Judith’s research examines the interplay between violence, conflict and armed mobilisation, including the militarisation of conflicts around natural resources. She focuses on eastern DRC, where she has conducted extensive field research since 2010. 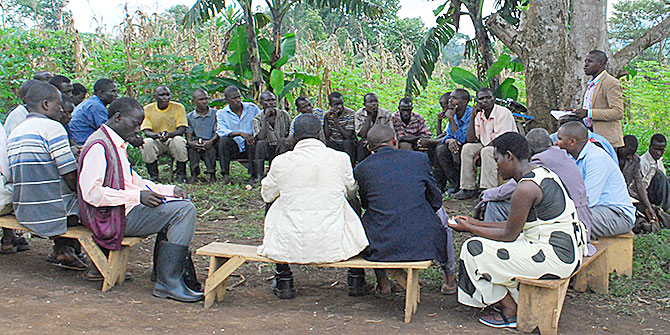 How #PublicAuthority is legitimised by making decisions in the right way

Bad Behavior has blocked 4404 access attempts in the last 7 days.