While the Beijing Consensus pushes a model of development in Africa without the West’s preconditions, China is also successfully rooting a soft power which promotes its political-economic thought through education initiatives, grounded in the teachings of Confucius, not Plato. Shirley Ze Yu examines an initiative that has awarded 50,000 scholarships to African students and future leaders in the last year alone.

Chinese president Xi Jinping appeared to bathe in great power and glory when all but twelve African heads of states and governments gathered in China’s power centre, Beijing, to celebrate the third Forum for China-Africa Cooperation in September 2018. At a time when Africa was bereft of state leaders, grants and loans worth $60 billion were taken home as a gift for paying tribute to China. The scene resembled a 9th century imperial court, when the Tang dynasty resided as the universe’s superior cultural centre, receiving tributes from all nations under heaven.

The China Model takes pride in its economic pragmatism. Late leader Deng Xiaoping, the mastermind behind China’s Reform and Opening-Up forty years ago, used this phrase to encapsulate his political economic ethos. ‘No matter it is a black cat or white cat, as long as it can catch a mouse, it is a good cat.’ To paraphrase, no matter whether it is a market economy or a socialist planned economy, as long as it can achieve economic development it is categorically good. The prevalent economic development philosophy underpinning the entirety of China’s spectacular growth has been that the ends justifies the means. Whatever is economically efficient is morally justified.

As little as China places moral imperatives on its own economic development, so goes China’s model of development in Africa. The China Model places neither preconditions of privatisation of industries nor contingencies of loans and grants on regime democratisation. China will not cancel loans because of rampant corruptions in Africa, nor will China stop financing projects because of environmental sustainability requirements. Such are the degrees of freedom Africa will never be able to indulge in under the Washington Consensus.

Africa is filled with a young labour force, abundant natural resources, wide ocean fronts perfect for global trade, almost all states run by illiberal governments and a desire for its people’s economic prosperity. All these critical attributes resemble those of China at the initiation of Reform and Opening-Up. The China Model is able to allocate resources efficiently and induce longer-term economic development, without reinforcing either full market or political liberalism. While the West is still debating whether the Beijing Consensus, coined first by Joshua Cooper Ramo, is simply an addition to the economic lexicon, it is certainly supplanting the Washington Consensus in Africa, and indeed in many other illiberal regimes throughout the global South.

The resonance of China’s politicised history with Africa

‘The most powerful thing for a country is not the army, the gold, but its story,’ so proclaimed the wise Tyrion Lannister in the Games of Thrones. China no doubt amasses enormous hard power, but in Africa, China is also said to be successfully rooting its soft power.

When grants and interest-free loans were given generously to Africa by Beijing in 2018, financial minds must wonder how that makes economic sense. It does not, until geopolitical and strategic returns are put into the calculus.

The secure global supply of oil is essential for China, being the world’s largest net importer, in anticipation of a potential full industrial decoupling between Washington and Beijing. Given global geopolitical uncertainty, China cannot afford to lose Africa.

Africa has also been diplomatically crucial to giving China a prominent voice and legitimacy under the 20th century’s global multilateralism. African states were the pivotal force and constituted more than a third of the total votes supporting the People’s Republic of China to replace Taiwan as the only representative of China at the UN on 25 October 1971. Chairman Mao Zedong praised that ‘it is our poor Afro-Asian and Latin American brothers who have carried us into the UN.’

Recently, in the contested election for the Director-General of the UN’s Food and Agricultural Organization (FAO), many suspected China had used financial incentives to align African interests, which gave the Chinese candidate the successful opportunity to head a major United Nations organisation. China, an ascending power within the western-led global order, has long mastered the skill to use the system to beat the system. Pragmatic interests, not moral tall order, has become the governing ethos of the Beijing Consensus.

Chinese history has always been rewritten by each dynasty to suit its dynastic political needs. At the heart of China’s politicised modern history lies its traumatic experience with the century of foreign invasion and ‘national humiliation’. From Mao to Xi, this powerful narrative and China’s modern resurrection create in Africa a powerful resonance, a continent with a similar history of humiliation by western powers and the same quest for the resurrection of national identities and prosperity. Africa naturally trusts a path China has created and offered as a model.

China has already surpassed the US and the UK as the largest destination of Anglophone African students, registering over 81,500 in 2018. At the China-Africa Forum in 2018, China pledged a further 50,000 government scholarships to African students, following the 30,000 already provided by Beijing between 2015 and 2018. To excelling students, the scholarships can be as high as $14,000 (RMB 99,800) per person per year. Additional funding and subsidies can be secured from Chinese universities in residence.

Today, in some of the elite institutions in China, including Peking University and Tsinghua University, many African students can be seen on campus reading ancient relics of Confucius and contemporary Chinese political philosophy. In elite universities in China today, public policy programmes modeled after ‘Harvard Kennedy School’ train the political thinkers of the developing world, and many brilliant minds from Africa. Scholarship is the pragmatic means to achieve China’s ends of educating Africa’s future leaders.

A scandal recently broke in Shandong University on China’s East Coast, where students, predominantly women, were paired with a ratio of three to one with overseas students of the opposite sex. They were expected to spend study and pastime together. This ‘buddy programme’ was criticised as a deliberate scheme by the universities to offer privileged treatment to overseas students, One out of ten studying in China in 2017 were from Africa. When the scandal broke out, Shandong University – not alone in this exercise – quickly apologised. Policy pragmatism – whatever works is justified – again dominates China’s soft power influence in Africa.

Africa’s directional shift in education matters a great deal to the future world – that leaders of Africa in twenty years’ time adopt the political ideology of Confucius and Xi Jinping Thought, and not Kant or Plato. The new generation of African leaders will identify, align, side and empower Africa with China. The West tried to bring industrial enlightenment to Africa in the 20th century, but the quest for a homogenous democratic Africa under the rule of law has caused much of today’s political backlash and cultural resentment from the continent.

China is winning not only Africa’s ‘gold’ but its political consciousness, its past souls and its future aspirations. Unless the West steps up its effort to educate Africa’s future leaders, it will lose Africa eternally and spiritually.

Shirley Ze Yu is Director of the China-Africa Initiative at the Firoz Lalji Institute for Africa at LSE, and senior practitioner fellow at the Ash Center, Harvard Kennedy School. 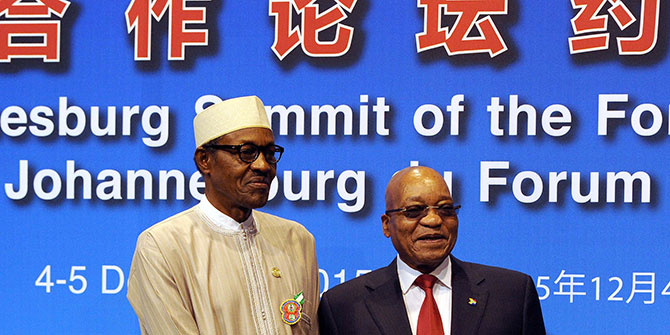 Bad Behavior has blocked 12697 access attempts in the last 7 days.