The combination of political, economic and security factors behind attacks on health workers and facilities during the 2018–20 Ebola outbreak in the DRC shows that we need to expand responses to epidemics beyond a focus on health aspects. Instead, a more comprehensive approach must also encompass efforts to engage, manage and transform community-based armed groups.

This post is an output from LSE’s Centre for Public Authority and International Development at the Firoz Lalji Centre for Africa.

For the first time ever, an armed group last year committed to protecting healthcare in armed conflict. Following sustained efforts over years by the humanitarian organisation Geneva Call, in August 2019 leaders of one of the most active community-based armed groups in the Democratic Republic of Congo (DRC), the Alliance of Patriots for a Free and Sovereign Congo (APCLS), signed a commitment to protect healthcare workers and facilities, including Ebola treatment centres. This is the first commitment of its type in the world, and it shows the potential of working with community-based armed groups to achieve short-term vital needs when responding to complex disasters.

In a recent RESOLVE research report, I define community-based armed groups (CBAGs) as armed groups that are embedded within communities and whose delineation can be defined by territory, blood ties or shared identities. My paper maps how different intervening actors – communities, governments, civil society organisations and humanitarian and development agencies – have approached the challenges posed by CBAGs. Approaches to CBAGs can be categorised as either engagement, management or transformation (EMT). All three approaches are pertinent for an effective response to health emergencies in conflict zones, including the 2018–20 Ebola epidemic in the eastern regions of the DRC.

Engagement follows a short-term logic; actors pursuing this approach with these groups do so for instrumental reasons to reduce violence within communities or to gain safe access for their staff members. In the context of Ebola, David Gressly, UN Ebola Response Coordinator, proposed to mediate between the government and CBAGs to reduce violence, while Jeremy Farrar, head of the Wellcome Trust, called for a ceasefire to facilitate access for health workers to attend to patients and track cases.

Management approaches follow a mid-term logic as actors envision a substantive change in the targeted groups. On the one hand, coercive management approaches include the use of force to defeat CBAGs or incarcerate their members. Due to violent resistance against the Ebola response, armed military escorts started to accompany health workers in insecure areas, stoking fears of forced vaccination and kidnapping. This militarisation further distanced the local population from response efforts and increased mistrust within communities, given their perceived neglect by security forces during years of violence and insecurity.

Cooperative management approaches, on the other hand, strive to alter the behaviour and roles of CBAGs through co-optation, negotiation or mediation. Geneva Call, for instance, engages and trains non-state armed groups on various issues of international humanitarian norms, including the protection of healthcare in armed conflict. This has led to the abovementioned first ever signed agreement by an armed group to protect health care workers and facilities, including Ebola treatment centres, and it should expand to other CBAGs operating in areas affected by public health emergencies, including COVID-19.

Last, transformation follows a long-term logic and aims to replace the functions that CBAGs provide to their members, sponsors and communities with a legitimate and accountable state. In the DRC, UN peacekeeping missions attempted to address the root causes and structural conditions that led to the emergence of the CBAG ecosystem through repeated Security Sector Reform and Disarmament, Demobilization and Reintegration efforts. The results of these interventions were limited, however, as transformation requires lengthy commitments and buy-in from multiple actors.

Treating Ebola in a conflict zone

The trajectory of the 2018–20 Ebola epidemic in DRC – which was declared a Public Health Emergency of International Concern by the WHO – shows the urgent need to expand efforts to engage, manage and transform CBAGs operating in the context of public health emergencies. More than 2,000 people have died from the Ebola virus in eastern DRC since the beginning of the outbreak in August 2018, making it one of the largest Ebola outbreaks in history, second only to the West African Ebola pandemic that killed more than 11,000 patients between 2013 and 2016.

Ebola was first discovered in the DRC in 1976; over the course of nine subsequent outbreaks, the country built a reputation for knowing how to contain the virus. Advances in vaccination and medication had the potential to be a game changer. More than 300,000 people at risk of contracting the disease were vaccinated against Ebola and 90% of patients who received treatment with experimental drugs within the first days of showing symptoms survived the infection. Given the extensive use of vaccines, the DRC had high chances of successfully containing the Ebola outbreak as it had done in the past.

However, this was the first ever Ebola outbreak in an active conflict zone where a multitude of armed groups are operating, complicating containment efforts. The impact of conflict and violence on transmission and control of Ebola is massive. Conflict-related displacement complicated the tracking of cases and increases the risk of spreading the disease within and beyond Ebola-affected regions. Key violent events, such as mass killings of civilians, election-related violence, and deadly attacks on Ebola treatment centres correlated with increased infections and Ebola-related fatalities. Weakened operational capacity of health facilities, contagious patients escaping to inaccessible areas and patients’ reluctance to visit health centers undermined containment.

Communities affected by the disease viewed response efforts by national and international actors with suspicion due to a lack of public trust in state authorities and international interveners and widespread misinformation about the disease. Beliefs that the Ebola virus disease does not exist, that it was fabricated for financial or political reasons and that Ebola responders may be connected to armed groups were common. A perceived neglect of other pressing issues – severe food insecurity, series of mass killings that displaced hundreds of thousands of Congolese, and measles and cholera outbreaks that are even more deadly than the Ebola epidemic – further fuelled mistrust towards Ebola response efforts.

The lack of institutional trust and spread of rumors led to hundreds of attacks on Ebola health workers and facilities, including the killing of a Cameroonian epidemiologist from the World Health Organisation. While disgruntled community members, including groups of taxi drivers, carried out much of the violence, CBAGs, some identified as Mai Mai, also threatened and committed attacks on health workers and Ebola treatment centres.

At the same time, the UN accused the Allied Democratic Forces (ADF) of creating ‘a deadly environment’ that renders the Ebola response more difficult. ADF is a CBAG operating in the border regions of Uganda and the DRC that has committed repeated massacres in Beni territory, an epicentre of the outbreak, since 2014 and killed at least 15 UN peacekeepers and five Congolese soldiers in December 2017. Since the beginning of the Ebola outbreak, ADF fighters continued to spread insecurity in Ebola-affected areas, further complicating the response. ISIS claimed some of these attacks, substantiating their alleged ties with ADF.

The reasons why CBAGs might attack health workers and Ebola treatment centres follow the logic of my conceptual framework of CBAGs, which I outline in my recent RESOLVE research report. Depending on the main function that they fulfil at a given point, CBAGs can be classified as (1) vigilantes providing security for their communities, (2) militias working at the behest of political sponsors or (3) criminal gangs pursuing the economic self-interest of their members.

Following this framework, attacks by CBAGs on Ebola responders can be linked to security provision. Mai Mai groups were established to defend their communities against any perceived threats, be that rival ethnic groups or foreigners seen as profiting from the Ebola epidemic. From a political perspective, the attacks can be linked to power struggles between traditional leaders and local politicians. At the national level, the central government used Ebola as a pretext to exclude communities in the epicentre of the outbreak – a traditional opposition stronghold – from participating in the general elections in December 2018. A third perspective suggests that economic incentives are behind CBAGs’ attacks on health workers and facilities. According to David Gressly, UN Ebola Response Coordinator, Mai Mai groups involved in illicit resource trade feared that the arrival of foreign money and personnel for the Ebola response could disrupt their lucrative business.

This combination of political, economic and security-related reasons behind attacks on health workers and facilities shows that we need to expand responses to public health emergencies beyond a focus on health aspects towards a comprehensive approach encompassing efforts to engage, manage and transform CBAGs. Just as a community-focused approach is needed to contain Ebola, COVID-19 and any other epidemic, approaches to CBAGs should adapt a whole-of-community approach putting community security at the centre of attention, building trust with affected communities and working closely with local actors to promote culturally acceptable and context-specific solutions.

Moritz Schuberth is a security and development expert with extensive experience managing projects and conducting research in fragile and conflict-affected settings. He is a CPAID research fellow at LSE's Firoz Lalji Centre for Africa and an Associate Expert in Evaluation at UNODC. 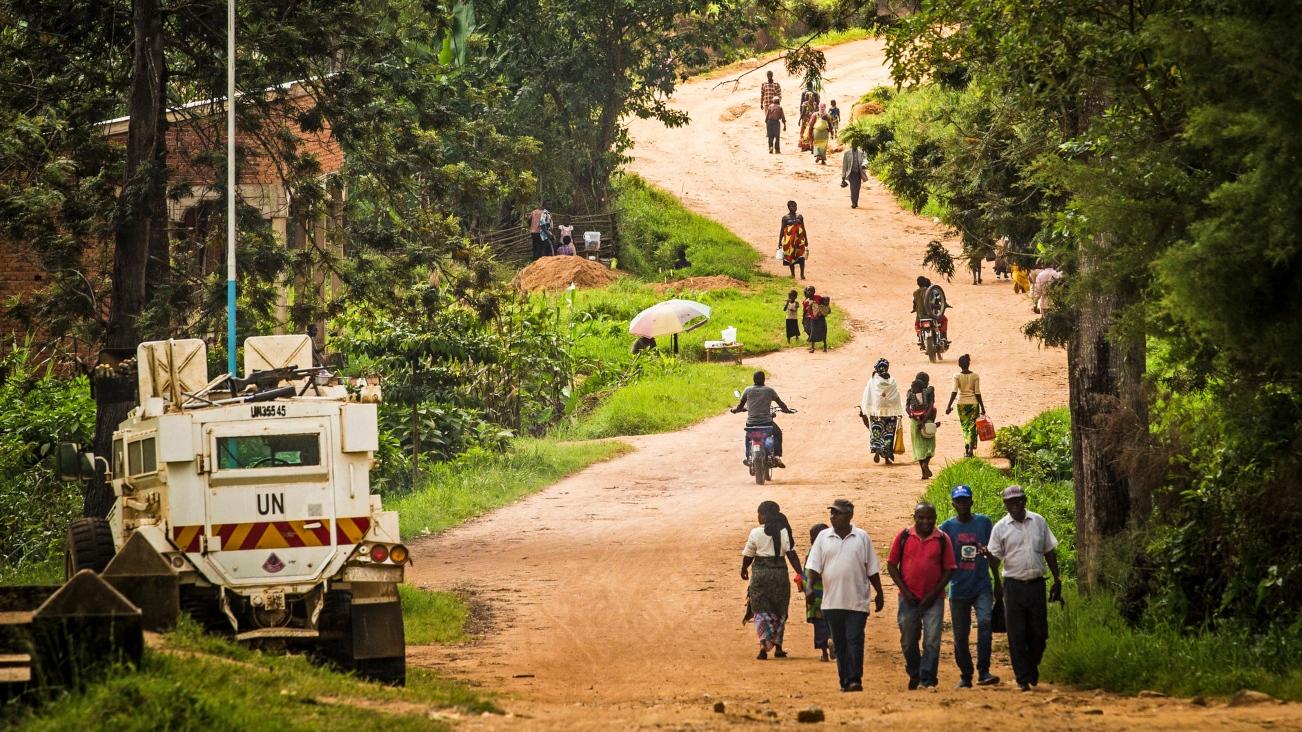