This article was originally posted on the LSE History blog

In celebration of Women’s History Month, Archivist Kate Higgins uses the Women’s Library@LSE archive to look back at women’s response to the Miners’ Strike 1984-85, on its 30th anniversary.

Thirty years ago this month the miners’ strike of 1984-85 – called nationally by Arthur Scargill of the National Union of Mineworkers (NUM) on 12 March 1984 following National Coal Board announcements of pit closures – ended and miners began to return to work. It had been the longest major period of industrial action in British history. 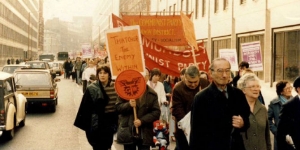 While women in mining communities had not participated actively in earlier miners’ strikes, this strike was different because the proposed closures threatened the communities’ entire way of life –affecting whole families, villages and towns as well as individuals. Spurred by this and by early press reports that miners’ wives were not supporting their striking husbands, women formed local groups to organise community kitchens, fundraising events, demonstrations and other supportive activities. These community groups coalesced into a national body called Women Against Pit Closures (WAPC), founded in Barnsley by local women including a Women’s Studies lecturer at Northern College, Jean McCrindle.

These papers illuminate the story of female involvement in the miners’ strike, and in particular illustrate not only the strike itself but also the revolutionary effect it had on women’s lives and their role in local communities. Previously mining communities had a traditional structure with women expected to centre their lives around their homes and families, but their involvement in WAPC and related miners’ support groups enabled them to learn new skills, explore new fields and develop talents in a way not previously possible.

Women in work: is ‘opting-out’ always a choice?

Bad Behavior has blocked 106 access attempts in the last 7 days.