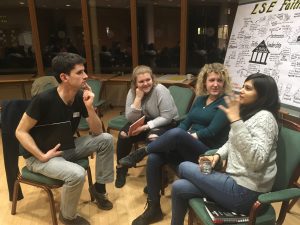 As we begin preparations for the next academic year here at the Faith Centre, starting a number of new collaborations across the LSE to expand interfaith work and planning towards Interfaith Week 2018, I have been reflecting on the principle of courage and its centrality in interfaith.

Interfaith Encounter: Israel and Palestine started four years ago. It grew out of the realisation that the discussion on Israel-Palestine at LSE, as with many other universities around the UK, and much like the conflict itself, had become stuck. Angry, belittling, inhumane. It is in the background of many other disputes on campus, and indeed numerous other tensions around the world. The LSE wasn’t managing to grow a generation of leaders who had the courage or the creativity to discuss the issue in a nuanced and mature way.

The Faith Centre Director, Revd Dr James Walters, saw the need to run a trip to the region. The trip brings 18 students to the region for a week to explore religious and political narratives and engage with numerous religious and political actors on the ground from Jerusalem and Bethlehem, Tzippori, Nazareth and Tel Aviv. We ask students from Christian, Muslim, Jewish and non-religious backgrounds to have the courage to step out of their context and spend a week together in the region, visiting sites of deep religious significance, and meeting religious leaders, activists and peacemakers to hear the histories and experiences that make up the conflict today. We do not ask our students to change their views, and indeed students return with their opinions stronger in many cases – but we do ask them to expand their understanding to include that of ‘the other’; the ex- Hamas fighter, the Israeli Settler, the communities in Jerusalem and Palestine, the region’s Christians, the local artist, the Embassy official.

The most powerful moments of Interfaith Encounter are often when the group shares worship across faiths, from witnessing prayer at the Church of the Holy Sepulchre, to celebrating Shabbat in synagogue, sharing Shabbat dinner with Jerusalem families and witnessing prayer at the White Mosque in Nazareth. This enables our students to have an experience of worship beyond just words, to witness the devotion across faiths and to step into the religious imagination of the other.

I believe all of our interfaith leadership programmes – including Interfaith Buddies and Faith & Leadership – require courage: courage to come from a context where interfaith may mean violence or destruction, courage to step into the shoes of those faiths they may never have encountered before; courage to empathise with narratives and beliefs very different to their own; courage of honesty and vulnerability and courage to journey together through these programmes even when profound disagreements may arise. I believe we also ask our students to expand their horizons – and through this to learn about their own capacities and limitations – a prerequisite for any community and any leader in our age.

We often fear that by engaging in dialogue across difference that it will somehow dilute our own beliefs, or change the core of our tradition. This is something we would never ask our students to do. Instead we hope they will come fully as themselves to engage and learn without the expectation that they will have to compromise on their beliefs. Through interfaith we can have the courage to worship with and learn from others, to grow in our diversity, to gain inspiration from the way other communities are doing things and to start to think more creatively about engagement across difference.

For more information on our programmes check out the Faith Centre website.

Making our LSE community one that exports peace