In March 2016 the Department of Government Conflict Research Group organised the first UK screening of the documentary “The Making of ‘Thinking of You.’” Telling the story of a giant art installation by conceptual artist Alketa Xhafa-Mripa, the piece featured some 5,000 skirts hanging on washing lines in the football stadium of Kosovo’s capital, Prishtina, to honour the victims of sexual violence. Dr Elisa Randazzo discusses the film and considers the power of art to break through the stigma and silence that surrounds war time rape.

Imagine countless books and journal articles filled with thousands of pages worth of words describing the role, function and impact of wartime rape and the victims’ experience of its aftermath. Imagine the power of those words on yourself, imagine passing on that information, bringing it up as many times as you can to raise awareness, spread the word, make people care, make the invisible, visible. Imagine the impact that these accounts, of which you are now narrator, can have on people who might have never heard of them, as well as on those who might have had similar experiences in their private lives or in those of their friends and family. Imagine creating a buzz, a community-like feeling that links people from all walks of life, a web of knowledge and acknowledgment. Alketa Xhafa-Mripa’s exhibition ‘Thinking of You’ somehow manages to do just that – to create a debate about the war time rape that has been silenced in Kosovo since the 1998-9 war – without a single written word. Imagine, in fact, replacing those thousands of pages worth of words with thousands of dresses, of all sizes, colours and fabrics, belonging to women of all ages, class and profession. Imagine filling a football stadium, a man’s world and a symbol of masculinity as the artist noted, with lines upon lines of clothes hanging in the wind, skirts used as symbols of the violation of women’s bodies.

This was the topic of a public debate organised by the Conflict Research Group (CRG) on 22 March at the LSE. The event hosted the screening of a documentary produced by Anna di Lellio and Fitim Shala  narrating the setting up of the exhibition, displaying images of thousands of women and men donating their clothing (and those of their female relatives) to the artist. In the artists’ own words, the exhibition was not merely an impactful way of narrating women’s experience of wartime rape, but it represented a deeper attempt to tackle the stigma and silence associated with such experiences. Breaking through the potential for politicisation of the use of rape in the Balkan Wars, the artist sought to let the donated dresses speak of the hundreds of different meanings people have attributed to rape. Some, as one comment from the audience at the event suggested, spoke of the importance of the woman’s body, and its nearly universal exploitation. Others, spoke to the meaningful, albeit otherwise underestimated, role that women played in national, political struggles that have so far only had men at their narrative core.

The screening of the documentary acted as a powerful reminder of how art can make sense of the impact of contemporary conflict from the perspective of gender in ways that often defy formal political debates. Artist Alketa Xhafa-Mripa joined us for the debate alongside Dr Denisa Kostovicova, from the LSE’s Government Department. All speakers have address the issue of gender in their work from multiple angles and through different means. Dr Kostovicova discussed the importance and implication of wartime rape through insights coming from her research in the field of transitional justice. She spoke of a pattern of sexual violence as a weapon of war in the Balkan wars; Dr Kostovicova noted, war time rape is used as a deliberate military strategy that “turns women’s bodies – and also men’s bodies – into the ‘terrain of conflict’, quoting the expression used by the Amnesty International”. According to her, the experience of rape in war, thus, takes a two-fold dimension; “it is both personal and impersonal in the same time, as a woman is seen as an epitome of the nation or an ethnic group. Assault on the woman is an assault on the whole enemy group.”

Dr Kostovicova also reflected on the ubiquity of war time rape: “globally, sexual violence is and has been employed throughout history, and continues with endemic proportions today; from Eastern Congo to Iraq, to survivor accounts of violence by ISIS on young girls from the Yazidi community”. Indeed, these experiences are meaningful because of their impact on the victims at the time they take place, but also, because they cause the alienation and stigmatisation of women within their own communities, as Ms Xhafa-Mripa pointed out during the discussion. Indeed, as Dr Kostovicova agreed “women are also often subjected to stigma in their own societies, and thus end up doubly traumatised.”

The ensuing discussion involving the audience touched on a number of issues, including: what is the impact that the experience of war time rape can have on general public awareness of rape even in non-conflict contexts? Is art able to affect policy-making in a way that translates general acknowledgement of the issue into meaningful actions? Could this kind of exhibition also be set up elsewhere, in other communities who have also witnessed wide levels of wartime sexual violence? When is a post-conflict society ready to come to terms with the realities of sexual abuse, denial and intra-ethnic stigmatisation?

The communal impact of sexual violence

The documentary showcasing Alketa Xhafa-Mripa’s exhibition gives a voice to thousands of silenced victims; brought to life through stories of ordinary people donating their and their family’s clothes, but also through high profile personalities in Kosovo and internationally. Amongst the audience at the LSE event was Cherie Blair, who figured in the documentary as she donated a dress for the exhibition.

Mrs Blair’s engagement with the project reflects her larger concern for the communal impact of issues of sexual violence; she states “the sexual violation of women in war is devastating; not only for the women and girls who are the victims, but also because of the way it is used deliberately to erode the cohesion of their families and of the whole community.” Speaking to her support for the project, Mrs Blair commented that “projects such as this play an important role in increasing awareness and continuing the pressure for greater international recognition of sexual violence as a weapon of war and of ethnic cleansing”.

Bringing the documentary to the LSE showed that art has an important role to play akin to activism. The lively discussion that followed at the event showed that there is wide support for the idea of tackling issues of gender through alternative, informal, inclusive forms of politics that can tackle even the most seemingly untouchable of taboos. Above all, the LSE event showed that addressing the issue of gender through multiple forms of activism is possible and that for it to be at the forefront of analysis, we need consider how else we can reach out to communities that have witnessed the horrific events and have had to continue to deal with their long-term devastating consequences. As I noted during the discussion, the issue of war time rape can easily become the object of manipulation and become embedded in wider political debates which can obscure the community’s everyday realities of living with the legacy of violence. The documentary showed us that it is, indeed, possible to bring attention to this subject in a more inclusive manner, through the medium of visual art.

All in all, the discussion at the event was indicative of the diversity of meanings that an exhibition such as that set up by Xhafa-Mripa can elicit. As I noted during the debate, the dangling, empty dresses flowing in the wind, precariously pinned to the clothesline by wooden pegs, it seemed, spoke more than the thousands of words in articles and books. At the end of the documentary one was left to wonder, as I did, whether filling a stadium with thousands of women would have had the same impact.

Randazzo  is a Fellow in Conflict Studies at the Department of Government at the LSE and a member of the Conflict Research Group. Dr Randazzo is interested in post-conflict peace-building and state building in Kosovo. You can read Dr Randazzo’s latest article ‘The paradoxes of the ‘everyday’: scrutinising the local turn in peace building’ in the Third World Quarterly online. The documentary “The Making of ‘Thinking of You’” was produced by Anna di Lellio and Fitim Shala. 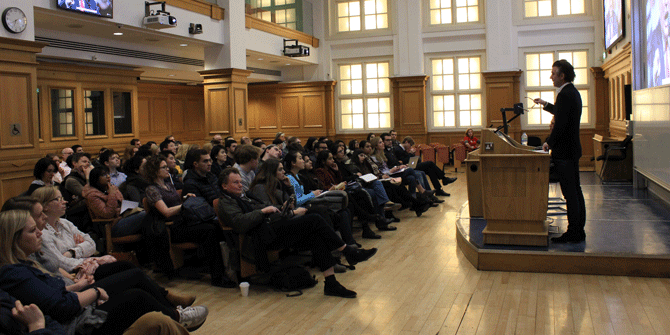 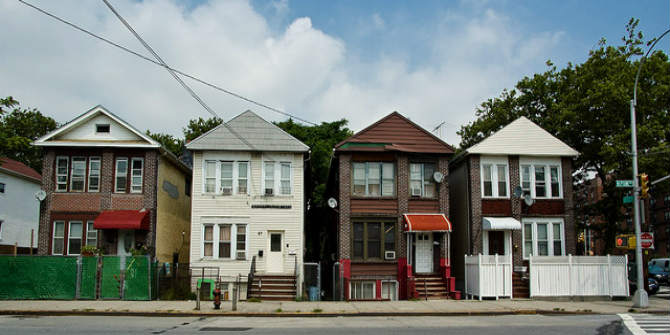