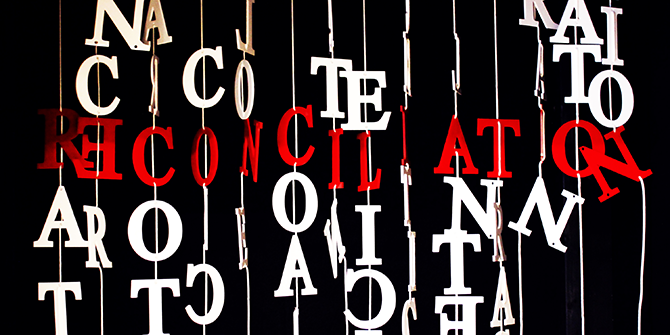 Political scientists Denisa Kostovicova, Ivor Sokolic, Tom Paskhalis and artist Nela Milic discuss the process of interdisciplinary collaboration, which turned a political science method into an art installation, and enabled a broader public engagement with a quantitative study of the quest for justice and reconciliation after conflict.

Text Illuminations is an art installation that represents in an art form a quantitative study of text as data. Collaborations between social scientists and artists are now at the forefront of interdisciplinary innovation. Driving it is the motivation to communicate research findings beyond the usual audience, which rarely crosses disciplinary boundaries. If it does, research seldom reaches beyond academic circles and engages with a broader public. Whereas the social scientists’ usual point of the departure is the research findings, we approached the task differently. Our starting point was the idea to translate a political science method – quantitative text analysis – into art.

We applied quantitative text analysis to debates about post-conflict justice involving people from all ethnic groups in the Balkans impacted by the conflicts of former Yugoslavia’s violent disintegration in the 1990s.  These were part of a regional civil society initiative which resulted in the support for a regional fact finding commission, known by its acronym RECOM. All debates that were held between 2006 and 2011 were recorded and transcribed. They comprise about 4 million words, which is approximately equivalent to 8 volumes of Leo Tolstoy’s ‘War and Peace’. Quantitative text analysis allowed us to study the patterns in these debates and glean how people seek reconciliation in the aftermath of mass atrocity.

Empirical evidence about how people reach out across ethnic lines in a post-conflict environment is important. The concept of reconciliation is contested and has multiple meanings attached to it. Common conceptualisations of reconciliation are normative, based on an expectation that explicit engagement with the past is required for societies, groups and individuals to reconcile with each other. Yet, it is much more difficult to say definitively what successful reconciliation entails and for whom. Paradoxically, attempts to reconcile different groups often increase, rather than decrease, inter-ethnic tensions. There is no single path to reconciliation; it is a long-term and open-ended process, with a myriad of possible outcomes. 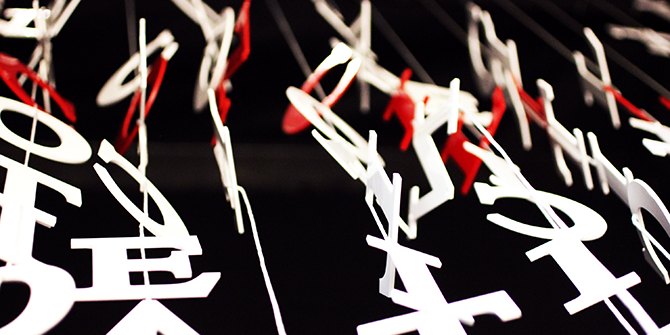 Responding to the idea to turn a political science method into art, artist Nela Milic created a word game that includes letters contained in the word ‘reconciliation’. The acrylic letters are suspended in a specially constructed dark room. The letters can be moved up and down, and their various combinations form different words, such as nation, coalition, creation, NATO, etc. Some words also transition from one language into another. For example, ‘rat’ means war in Serbian-Bosnian-Croatian languages. Words can also be faded in and out with a torch that is provided. Illumination gives new prominence to the words and their meanings.

The art installation represents the substantive finding of our research project: the meaning of reconciliation in the aftermath of mass atrocity cannot be fixed. People interpret reconciliation in different ways by associating it with different concepts and experiences. Nonetheless, an empirical study of reconciliation that approaches the debates as big data can reveal the patterns in the possibilities that are not endless. Above all, the word game also reflects the logic of the political science method.

The core assumption used to analyse text as data is a ‘bag-of-words’. It states that most of the information contained in text can be captured by disregarding word order and only accounting for word frequencies in each document. While seemingly naive, this assumption made models computationally tractable and generated a plethora of important results. The key to understand this paradoxical mismatch between the complexity of language and substantively interesting results produced by a more simplistic approach is to focus on the quantities of interest. For scholars applying qualitative text analysis, these are discourses and narratives. For researchers applying quantitative text analysis those usually include salience, positionality and topical content. While the former can hardly be assumed to be purely a function of word frequencies, the latter often manifest themselves in returning to the same point multiple times throughout the text.

Despite the increasing proliferation of text analysis models, the resources for visualisation remain limited, compared to the choice available to other statistical analysis techniques. Often researchers do not venture beyond simple word clouds that have become ‘pie charts’ of quantitative text analysis. What we attempted to accomplish in our collaboration is to leave the comfort zone of statistical plots and to allow a wider audience to physically engage with the text and the method. Not only does this bring a completely new level of proximity, but it also allows those interacting with the letters to reflect on the contentious topic of reconciliation. 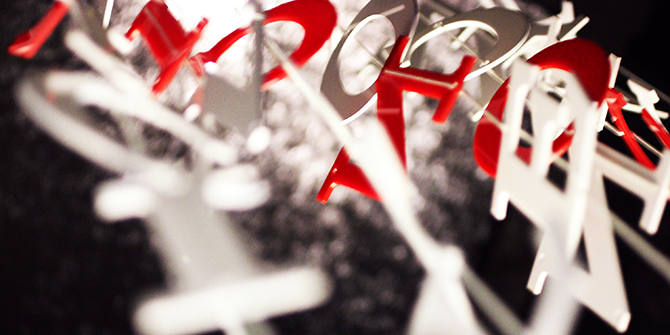 Counterintuitively, Text Illuminations is a distinctly non-technical artefact, although originally an idea to create a digital piece was entertained. Indeed the first meeting with an artist was all about familiarising her with the computer-assisted analysis on which our study of text as big data relied. But, the only digital technique that was ultimately used in the production of the art piece is the laser cutting of the letters. It is the non-technical feature of the art installation – the suspension of words in a three-dimensional space – that mimics the method in a palpable way.

By entering the gallery, the audience steps into the art world where they have to negotiate its aesthetic regime together with the political science research, which is at the heart of our interdisciplinary collaboration. The players of the word game get to engage with the logic of the quantitative text analysis method: inferring the patterns of communication from words and their alignment. Also they experience in a personal way the difficulty of pinning down the meaning of reconciliation in a peace-building context.

Lastly, the collaboration is also a transformative experience for all involved. It makes the political scientists focus their mind on communicating the rigour of their research, while being ready to let go of its interpretation. The experience has not been less challenging for the artist. She had to immerse herself in the process of scientific research, for which shadowing political scientists during their research was critical. The encounter with political scientists also brought additional benefits. With increased prominence of practice-based art that directly engages with a raft of political and social processes, the collaboration opens the possibility of learning across disciplines in order to better evaluate such artefacts.

Text Illuminations is exhibited at the Exchange, Bush House, NE Wing, 30 Aldwych, WC2B 4BG until 1 December 2018. The exhibition titled ‘Reconciliations’ is part of a major AHRC-funded project, ‘Art & Reconciliation: Conflict, Culture and Community’, led by King’s College London in collaboration with London School of Economics and Political Science and the University of the Arts London.

Text Illuminations will be exhibited at the LSE as part of the LSE Festival: New World (Dis)orders.

Dr Denisa Kostovicova (@DenisaKost) is Associate Professor at European Institute and Department of Government, LSE, and the PI at the LSE strand of the ‘Art & Reconciliation’ project.

Tom Paskhalis (@tpaskhalis)  is a PhD candidate in the Department of Methodology and a Research Officer working on the ‘Art & Reconciliation’ project.

Dr Nela Milic (@Nela_sts) is the artist and Senior Lecturer at the London College of Communication, University of the Arts London. 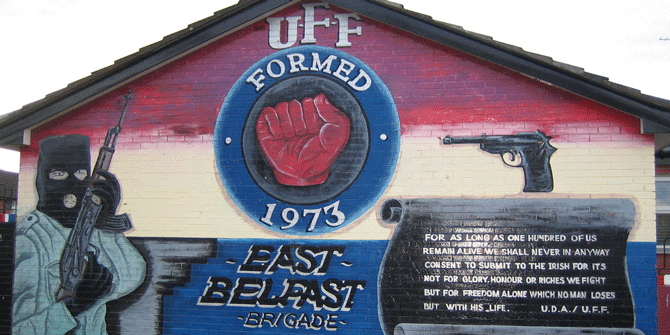