Academics may be well aware of mounting time pressures but is standard clock-time useful for understanding academic work? Alexander Mitterle, Carsten Würmann, and Roland Bloch look at how teaching is understood in relation to time in German universities. They report how the SWS, a figure related to an individual course frame, can be understood as a quantifiable time classification, but one that functions as an indeterminate time category which views teaching as part of an academic practice that is inherently non-linear and open. The SWS framework opens up possibilities for new ways of how time metrics can represent teaching time.

Time is scarce in academia. This applies to Britain just as well as to Germany. Academics have to publish, teach, administer and more recently engage in service work. According to Jacob and Teichler (2011) professors in Germany spend on average 56 hours per week on their academic duties, with 18.5 hours on research, 17.3 on teaching. An average civil servant contract accounts for 40 hours per week. Time thus indeed is scarce if 3.2 hours are added to every work day. Malcolm Tight (2010) reports similar figures for Britain. But also that these figures have not changed much throughout the last decade.

The story could end here and make up for a good political argument why academics are over-worked or at least why these hard working elites are worth their position. There is however a hidden story to academic time counting that moves along in footnotes and methodology sections. In order to arrive at the above time accounts a considerable ordering has to take place: time moves from the feeling of being “scarce” through survey questions, into excel-tables, to calculations until it shows up as a precise weekly clock-time count. This story is driven by comparison that makes and uses clock-time as a device that represents work time in a specific setting. 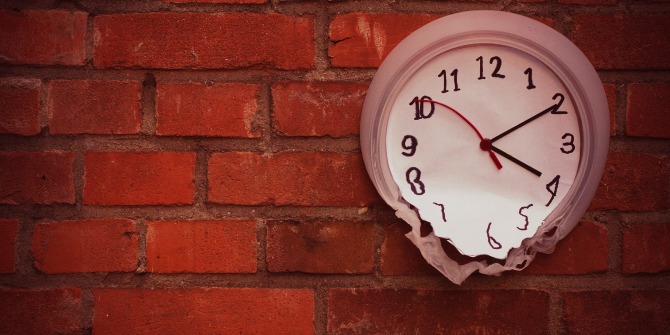 The setting has nothing to do with academia but the name: only if time is decontextualized – from chairs, and departments, from class-rooms, office rooms and Weberian moments of enlightment – it can be re-contextualized in a field together with civil servants and British professors. The most decisive aspect is not time itself but the frame through which time is assessed: professors receive surveys in which they can only account for their work time in hours per week. Researchers presumably assume that providing weekly clock-time counts is the most accurate way to assemble individual work time.

Clock-time seems familiar, we look at clocks all the time: we wake up through alarm clocks, have a break at twelve, teach from 13.15 till 14:45, leave at seven because the shops close at eight and anyway there are only 24 hours to a day. But is this time also applicable to academic work?

We thought so. When we sent out an online survey to get an account of how much time academics spend on teaching at five universities in Germany we asked them to provide weekly clock-time counts. Apart from some unrealistic results – which you can account for statistically – academics again were overworked. Until we got the following e-mail:

“I have tried to fill out your survey, but failed to calculate my weekly working time as I neither own a time-punch clock, nor do I make statistics on my working hours. I would need at least one to two hours of preparation to at least provide an approximate estimation of my workload in statistical terms.” (Professor, humanities, translated email)

Within the timeframe of a survey question we asked academics to provide hourly accounts of their doings without reflecting on whether this was the way they account for their work. We were left with what Schuster and Finkelstein (2008) in a moment of critical self-reflection have called “crude self-reported estimates”. Indeed several studies have used such frames by following people around, sending them SMS-requests on what they were doing or by having them produce daily reports and they have come up with similar results as the above. But for the German case at least clock-time is an artificial category to teaching that has to be either translated by the academic or the researcher following him/her.

If you however walk down a random corridor in a German university and ask a specifically overworked looking professor how much he teaches, he will be able to give you a response within the blink of an eye. He is teaching eight to nine Semesterwochenstunden (SWS). The SWS is a weekly work-time figure that generally accounts for a 45 minutes frames of class-room teaching. But it is more than just a simple contact hour measure. It is an ordering device within German higher education that functions as a universal and moveable work time object which can be employed everywhere in the university. It classifies the worth of a course in SWS, makes the syllabus visible, aligns courses to staff positions and it even defines enrollment numbers. It is a device that serves as a useful ordering category for administration and it provides sufficient flexibility – even “intimacy” – for teachers to transform it into their teaching practice.

Rather than being artificially installed by a watch or a stalking researcher it is an artificial object that all sorts of people use within the university. It does this not as a simple substitute for a course or a seminar but aligns the course to all the other courses within the university. The SWS only functions if it is related to other SWS, it enrolls in calendar time, structures the lecture period and all other non-teaching related tasks, accounts for preparation, brings people into classrooms and allows for tactical movements of teachers. It is less a geographically and temporally located practice but a net of relations and tasks that define how and what has to be done in the name of teaching.  But: It can also be counted and accounted for.

What makes the SWS as a representative of teaching time so interesting? Just as weekly clock-time counts it is a quantifiable time classification, but it is also a time category that is used within the practice of teaching. It can enroll in teaching precisely because it does not operate with ever more delicate clock time counts. It is this indeterminacy in terms of clock-time that makes teaching part of an academic practice that is inherently non-linear and open. It is a time account that academics have to live with but one they can handle even if they do not like it.

It however does not work outside of the German university. Civil servants have attendance times of time-punch clocks, they do not have SWS. And asking a British professor how much SWS he teaches probably would end in a rant on cryptic administrative abbreviations. Yet it also makes an organizational time structure visible that is useful in assessing academic work. Thinking of teaching as a form of interrelated class-room attendance that comprises all sorts of teaching-related tasks allows us to look at seminars, lectures and practical courses in a similar way. The SWS is nothing else than an operationalization of courses within the organization. And courses are of universal character as long as the university remains a global institution. There are considerable differences between higher education institutions but the way individual teaching is framed has to look similar. The university only functions if the essence of its doing remains comparable.

With the successive digitalization of course catalogues throughout the last decade the teaching done within a university becomes easily accessible. What these accounts lack however is a coherent logic that draws them together to make them adequate accounts of teaching time. The SWS can function as a blueprint for looking at courses given that similar frames exist worldwide:  similar courses can be accounted for depending on their type (practical and laboratory courses, excursions, lectures, seminars etc.) and they can be aligned to staff positions. Average course-counts per personnel category (professor, research associate, lecturer etc.) can be compared and related to structural differences between status groups, geographical locations, university types, and disciplines (Bloch et al. 2014), and across nation-states.

The digital data also comes with a new quality. It can show how teaching time travels from one department to the next and how it is dispersed among disciplines. Longitudinal data can provide insights on the relationship of replicated and new courses within academic workloads, and thus how past teaching time is folded into newly enrolling courses. With precise calendar times the dispersion of individual courses and academic condensing practices can be traced. Looking at courses through the eyes of the SWS provides for new ways of how time metrics can represent teaching time. The course might be an indeterminate time category that avoids comparison to other employment categories but it directly relates to teaching practice rather than being an independent sideline-measure on its own.

Roland Bloch is a researcher at the Institute of Sociology at Martin Luther University Halle-Wittenberg.

Leave a Reply to Impact of Social Sciences – It’s time to teach — but which time is it? – Paine College Library Cancel reply 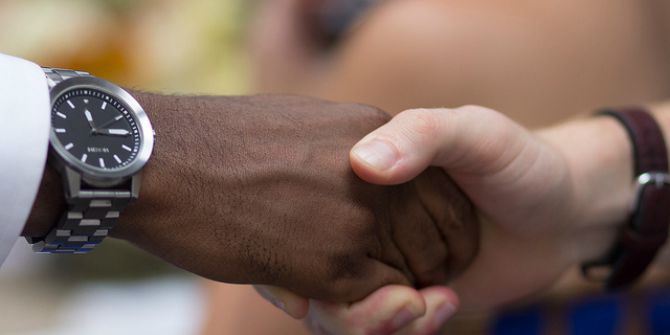 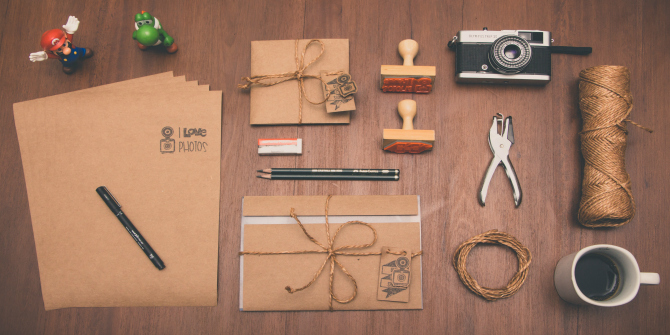