Christopher Murray
One week in Accra: Doing archival research in the anti-colonial ‘beacon of hope’

Ghana is marking 60 years of independence from the British Empire this year. This was a fact that I had strangely not considered before arriving in the country’s capital – Accra — to carry out archival research during the first week of May (funded by the Global South Doctoral Fieldwork Research Award in the International Relations Department at LSE).

Bar three days in Tangier, Morocco in 2012, this was the first time I had set foot on the African continent.  Even though I’ve been studying Africa seriously, especially West Africa and Ghana, since beginning a BSc in Development Studies at Lund University, Sweden 7 years ago. My research sits under the sub-category of historical International Relations (IR), and under the sub-sub-category of international intellectual history. Specifically, I study the competing ideas around multi-racialism, multi-culturalism, progress, and world order which populated discourse in the run up to African independence.

At Kotoka International Airport I was greeted by the sight of banners announcing “60 Years On: Mobilising for Ghana’s Future”, and, less auspiciously, a gift shop selling t-shirts and bars of chocolate with special 60th anniversary wrappers. The wrappers bear images of the cabinet of the revolutionary socialist Convention People’s Party (CPP), and its leader, Kwame Nkrumah, who was overthrown in a near-bloodless coup led by General Emmanuel Kotoka (yes, the airport’s namesake) in 1966.

Such mergers of commerce, public memory, and nation-state identity – commonplace in the global North – seemed slightly ironic here. By and large Ghana has made remarkable progress since 1957. Economically and politically, Ghana is a symbol for many of the possibility of Africa’s brighter future. Pride in the country was present in every conversation I had with an Accran, the first of which was a woman on the flight from Heathrow, who after only five minutes was giving me her phone number in case I had a chance to come have dinner with her and her family.

However, one of the most important things to say about Ghanaian independence, was that it was not just about independence for Ghana. Nkrumah was mentored and advised by the Trinidadian-British activist and journalist George Padmore. From the 1920s to the 1950s, Padmore used all the means at his disposal to end colonialism in Africa. Ideologically he shifted from Marxism-Leninism to pan-Africanism, eventually helping to create one strand of the hybrid ideology, African Socialism. Fundamentally, Padmore was both an anticolonialist and an internationalist. Ghana’s (known then as the Gold Coast) independence was seen as a vanguard movement for the decolonisation of Africa, and ‘a beacon of hope’ for all colonised people struggling against imperial rule. When Padmore died in 1959, Nkrumah founded a research library on African affairs in his honour. Behind the library which stands today on Gamel Adul Nasser Ave., there is a memorial to Padmore, featuring a silhouette of the African continent with a torch marking Ghana on the continent’s Western coast. 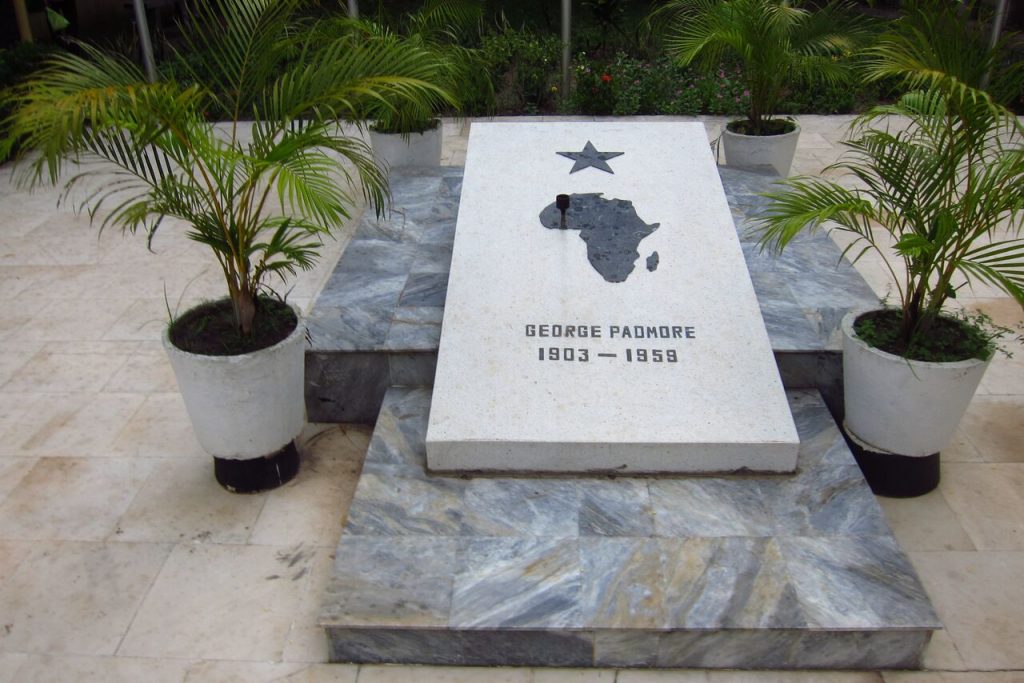 The George Padmore Research Library (GPRL) was one of two archives where I sat for 7 hot days perusing boxes and boxes of files, conference documents, parliamentary debates, and newspaper clippings from this period in Ghana’s history. I would be lying if I said that the GPRL and the state-run Public Records and Archive Department (PRAAD) housed the most pristine and well-ordered collection of documents, but it is also true to say that they contain treasure troves for those studying African, Ghanaian, and colonial history. After only a week, I found documents that I had no idea existed – despite voracious reading of secondary sources – documents which I believe pushed me months ahead in my research.

For anyone whose research focuses on a place, I can now unreservedly recommend go there. For those doing historical work: read primary sources. While archival and field research present their own unique problem, there is simply no substitute for the context and perspective they provide.

The trip was made possible through the Global South Research Fellows fieldwork grant, awarded by the Department of International Relations, LSE.