Centre for International Studies (CIS) celebrated its 50th anniversary on 8th December 2017, with a Roundtable event in which academics and practitioners with connections to the Centre debated  the challenges that the world will face over the next 50 years. 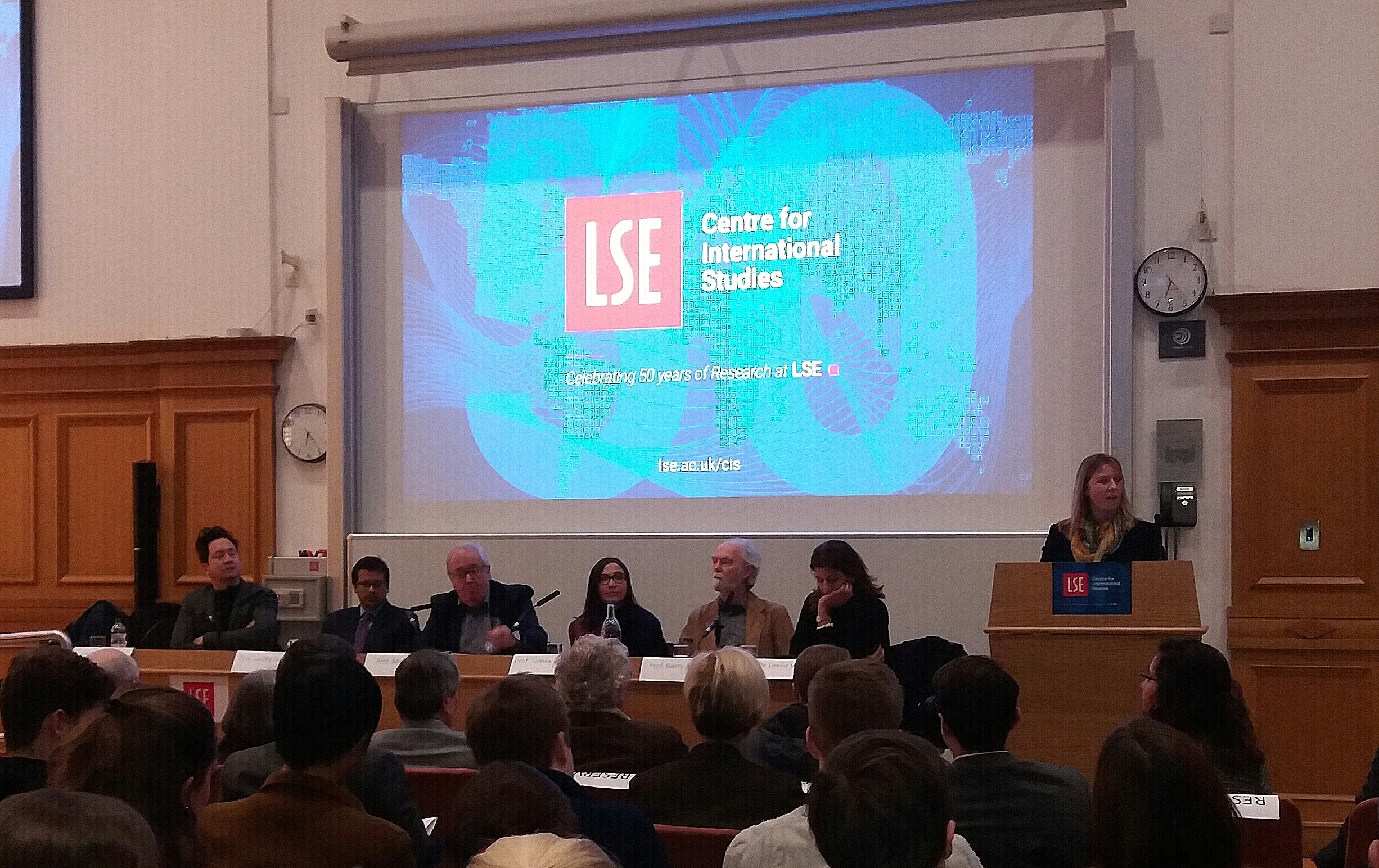 Current CIS Director, Dr Kirsten Ainley, opened the event by presenting a historical overview of the Centre, noting that when it was created in 1967, it was the first international studies centre in the UK. A range of LSE departments were involved in its establishment, making the Centre interdisciplinary by nature, a feature that still characterizes the institution and that is reflected in the broad range of topics CIS fellows have worked on over the years.

Dr Ainley then continued to present two important upcoming initiatives: the CIS-Cambridge University Press (CUP) book series, and the Fred Halliday Postdoctoral Fellowship. The book series is a much-awaited revival of a long-standing joint venture between the CIS and CUP. The Fred Halliday Postdoctoral Fellowship is a new initiative aimed at raising money to fund a postdoctoral fellowship in honour of Prof. Fred Halliday, a pivotal figure at LSE for more than 30 years. Finally, before passing over to Chair-for-the-night, and LSE IDEAS Director, Professor Mick Cox, Dr Ainley presented a book written by Dr Aaron McKeil with the support of former CIS Directors and LSE faculty, recollecting the history of the Centre, The LSE Centre for International Studies. A History: 1967-2017.

The roundtable started with Dr Leslie Vinjamuri, Director of the Centre on Conflict, Rights and Justice, and Chair of the IR Speaker Series at SOAS. She talked about the US backlash against liberalism, asking whether it was inevitable and/or consequential. She suggested that the contemporary politics of backlash were not inevitable, and they are deeply consequential, defined by concerns about economic hardship, inequalities, concerns with identity, status and so forth. The US leadership is also deeply consequential because of the role of the US, as a norms’ setter, in shaping the future of international politics in the next 50 years and its power in international relations.

Within this scenario, Dr Vinjamuri critiqued two conventional wisdoms of: first, ‘the angry white man’ thesis, i.e. the simplistic claim that dissatisfaction among voters about US politics is inevitable due to inequality, stagnation of wages, and relative economic decline on the part of the US globally. Second, the idea that everything has changed in the way states work with the US. In fact, European states are pragmatic towards US politics. Despite their dislike of the rhetoric and attitude of the new administration, elites in Europe find some reassurance in the fact that certain policies remain intact.  But very significant policy differences (on Iran, on climate change, etc.) have developed and the longer term implications are uncertain. Finally, she suggested that agency matters. It’s been seen in response to the US president’s decision to pull the US out of Paris, in the politics surrounding the courts and civil society pushing back against the ‘Muslim ban’ and so forth.

The second speaker of the night was Professor Barry Buzan, Emeritus Montague Burton Chair at the Department of International Relations, LSE. Professor Buzan talked about the global challenges for the next 50 years, as seen by China and emanating from China.

He put forward two main points: the first concerning China’s obsessive prioritization of domestic issues over foreign policy ones. Peasants’ revolts, fragmentation of power, the possibility that the Communist Party’s heavenly mandate to rule the nation might be threatened remain primary concerns. The second point emphasises the necessity, for the world in the years ahead, to take seriously the Chinese ‘way of thinking’, systematically different from the western one. As an example of this, he discussed the ways that conflict works in each system. While dialectics in the West are opposites (ideally) producing a synthesis, in China they are Yin-Yang and a continuous process of adjustment. The two systems experience contradiction and conflict in fundamentally different ways.

The third speaker was Professor Tomila Lankina, Professor of International Relations at LSE. Professor Lankina compared Russia to China defining the first a predatory autocracy and the second a developmental one. While a developmental autocracy tramples on human rights, it simultaneously engages in state modernization, infrastructure development, investments in public services, providing legitimacy to the regime and long-term stability and viability of the State.

By contrast, a predatory autocracy like Russia also tramples on human rights, but, being built around the interests of a kleptocratic elite with powers centralized in the leadership of one man, it owns the state and its resources and has an inbuilt predatory logic, in which developmental objectives do not fit. Hence, domestic insecurity is the real and pressing threat, vis-à-vis external ones. Professor Lankina suggests that, in the long term, political instability from regime collapse may spell territorial collapse, and this would be the result of more than 20 years of regime dynamics, rather than the effect of external threats. If this happens, it will present challenges to the regional and global order.

The conversation continued with Professor Lutfey Siddiqi, Visiting Professor-in-Practice at the Centre for International Studies, LSE. Professor Siddiqi talked about the fact that when thinking about global challenges in the next 50 years, we need to consider that we are inside of a tumble drier called the fourth industrial revolution. It is a technology revolution, but its impacts are far reaching. This revolution presents us with an incredible paradox: in aggregate, we are witnessing the unfolding of technology that has the power to give us virtually everything that we need, in every aspect of our lives. But it is in distribution and leadership coordination that the problem resides. Hence, Professor Siddiqi suggests, if we do not try and reshape where this revolution is going, it will exacerbate inequalities and concentrate economic surplus in a few hands.

Last was Professor Julian Go, Professor of Sociology at Boston University, who focused on how we might use history to confront challenges in the next 50 years. Professor Go focused on the link between rising inequality among individuals and rising competition in a multipolar world. We are currently, since the 1980s, undergoing a relatively unique moment, a ‘great confluence’ of rising inequality among individuals on the one hand and, on the other, hegemonic decline and rising equality among core states. We have started to see tendencies of economic nationalism, i.e. Brexit or Trump’s trade proposals, increased forms of xenophobia, nativism or racism. These are the same themes of history repeating itself at moments of confluence between economic inequality on the one hand, and multi-polarity on the other, which have led to global conflict.

Finally, a lively Questions & Answers session took place, with themes of debate revolving around globalization, i.e. shared problems and faiths, the assumption that the State will exist in 50 years, the hegemony of liberal ideology, and deeper pluralism with the diffusion of wealth, power and cultural authority. And finally, the degree to which agency matters and where concerned political citizens should concentrate their energies in the years ahead. 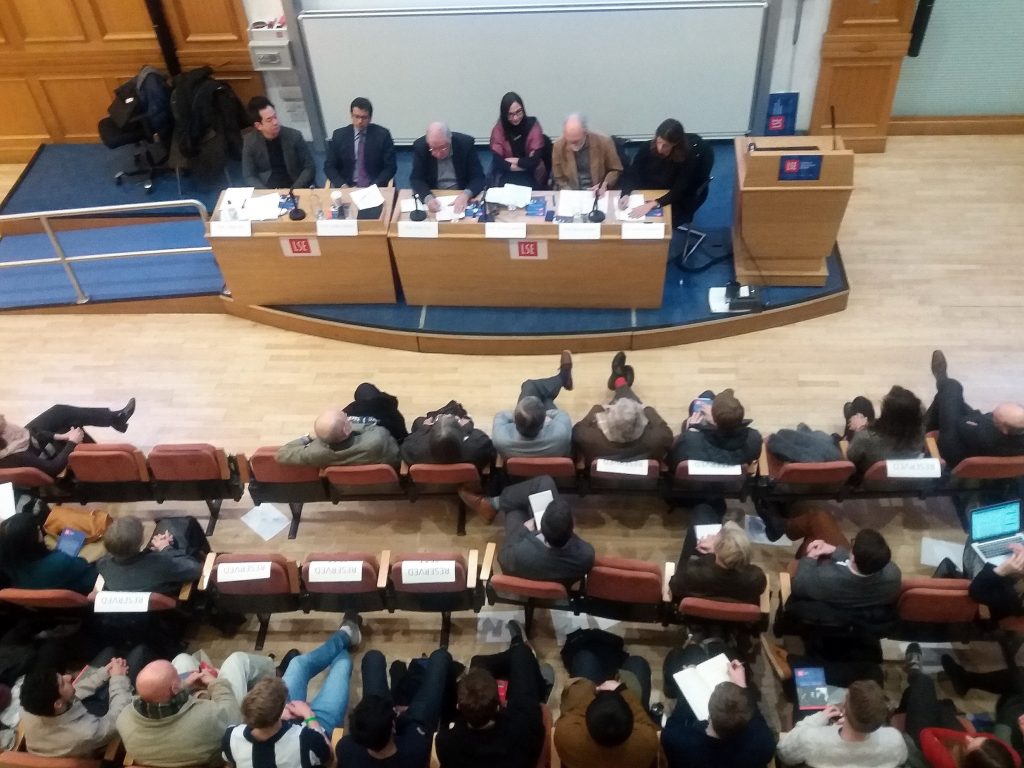 This post is only a sketch of the rich and provocative arguments put forward at the debate. Watch the video of the event for the full discussion.